In which we announce the eventual return of Starter jackets to the world of High Fashion.

Few things about this beauty:

1. The realization that Duane Kuiper's voice wasn't always as delightfully sonorous and soothing. It doesn't have the same gravitas that it would pick up over the years of practice.

2. This was the meme going around back in 1983. They had a tough, no-nonsense manager. And Duane Kuiper. And Chili Davis! And Brad Wellman? But pay attention to the manager.

3. Frank Robinson would still rip your ears off today to prove a point. Good gravy, that glower.

4. Kuiper's 1983 season was almost exactly what I would expect from Brock Bond if he were to make the team. I wonder if Bond is funny. 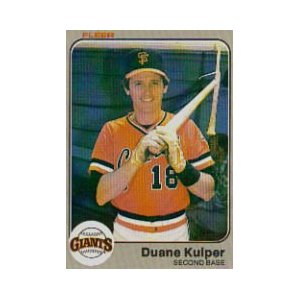 He autographed one of these for me when I was a kid. He signed it right along the bat.

In conclusion, Duane Kuiper is the best, Frank Robinson is terrifying, and Chili Davis never should have been allowed to leave.