Share All sharing options for: Hunter Pence on Conan

This is a page on the Internet:

On this page on the Internet, this picture exists. 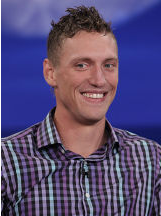 Just when you think you've wrapped your brain around the Giants winning the World Series ...

Here's part two of the Hunter Pence/Conan O'Brien interview, which doesn't get less weird to type with practice.
Part 2:

Bonus coverage! Romo and Zito on the Jay Leno show! Almost as interesting as the Giants winning the World Series: the discovery that Jay Leno still exists.