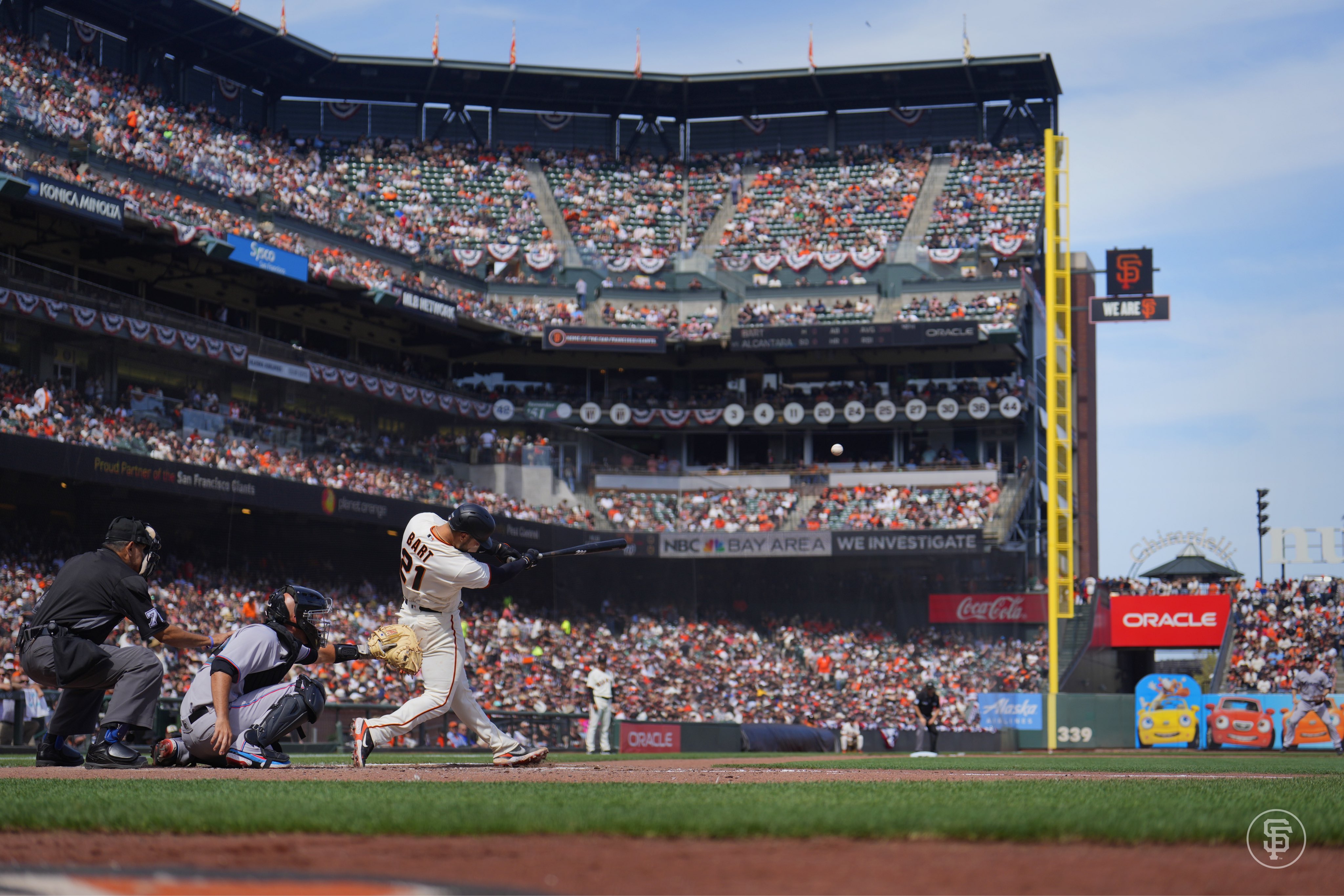 Baseball is back, and it feels…weird? Good? Whatever your emotions after the Giants’ 6-5 victory over the Miami Marlins, baseball sure feels like it missed us. Crammed inside the 10 innings of Opening Day were infield hits, defensive miscues, mammoth home runs, and Logan Webb dominance.

Let’s start with the last one. When we last left off the regular season, Webb was busy putting the finishing touches on a 22-game unbeaten streak, ascending from supposed fifth starter to unquestioned ace. He picked up right where he left off, throwing 6+ innings of masterful work. His deadly sinker carved up Miami’s hitters, inducing 11 groundouts to pair with three strikeouts. While other pitchers throw their arms off for swings and misses, Webb collects weak tappers up the middle like trading cards. It’s awesome.

Opposing him was Marlins ace Sandy Alcantara, who sports a 3.49 ERA over his 5 major league seasons. Alcantara kept the damage limited to walks early, but the Giants got to him much more effectively than the Marlins could get to Webb. Despite managing just three hits off of Alcantara, the Giants drew five walks as they scratched out a trio of runs, including a mammoth home run by Joey Bart. With that blast, Bart gains the distinction of being the first Giants rookie to crank an Opening Day home run since… Will Clark. Hey, I wonder if there are any other-

Despite an excellent outing by Webb, the Giants defense struggled, especially early on. It’s understandable that without several weeks of Spring Training, the Giants simply haven’t been able to round into form. There’s nothing to suggest they won’t, but it’s hard not to remember this Grant Brisbee article prognosticating a cataclysmic San Francisco defense in 2021, and the position players are largely the same this year. Three of Miami’s nine hits were infield hits, and Giants pitchers simply did not get a ton of help. Add in a bobble by Wilmer Flores and a Thairo Estrada error on a potential double play, and the Giants certainly gifted Miami their fair share of outs.

But Thairo at least made up for his error with an otherwise spectacular Opening Day. In the 4th inning, he made this acrobatic play that absolutely robbed Jesus Aguilar. Oh, and did I mention that he kept San Francisco from losing its first Opening Day at home since roughly the Stone Age with this towering home run?

Estrada joined Brandon Belt on the dinger squad, as Belt launched a missile into the Arcade within 15 seconds of me suggesting that he do as such. I don’t have a source for this. You just have to believe that I have the ability to make Belt launch one when we need it the most. I appreciate your trust. Belt continues to defy expectations, and the fact that he bunted for a base hit in the 3rd and scored Bart on the play is nothing short of truly beautiful. That's what you get from a sheriff who rides into town on a boat.

Last year, I wrote about the mystical forces that conspired against San Francisco to ensure they struggled against Pittsburgh, one of the league’s worst teams. At the heart of the Pirates’ illogical mojo was catcher Jacob Stallings, who was traded in the offseason to the Marlins. Today, he continued to torment the Giants by blowing up Dominic Leone’s outing, hitting a two-run home run in the 7th to put Miami on the board. He further annoyed by adding an RBI single in the 9th for the Marlins’ third run, as well as throwing two runners out on the basepaths early when the Giants really could’ve used the pressure against Alcantara. Stallings’ Gold Glove is legit, and even though his hitting numbers aren’t impressive, I’ll still be happier the less the Giants see of him.

But if Stallings spearheaded the Fins’ late-inning comeback, it was Jazz Chisholm that broke through the opening he provided. After a 1-2-3 inning from Jake McGee in the 8th, 2021 revelation Camilo Doval had trouble putting away Miami with a 4-2 lead in the top of the 9th. It started with, of course, an infield hit that bounced over the mound and stopped dead on the grass. The trouble was exacerbated when Miguel Rojas grounded into a potential rally-killing double play, but Thairo Estrada rushed a throw to first that sent Rojas to second on an error. That mistake let Stallings line an RBI single that kept Miami in the game. That’s when Chisholm struck.

On a 2-1 count, Doval threw a fat slider that caught too much of the zone and Chisholm launched it into the left field bleachers, erasing a lead the Giants had held for most of the day. It was the third time Chisholm had reached base, and he and Stallings tried their absolute hardest to make San Francisco miserable essentially on their own.

But in comes Thairo to save the day, launching a 0-1 fastball a few rows higher than Chisholm to bring the Giants right back into it. Whether the Giants are going to be as #ResilientSF as they were last year remains to be seen, but they’re off to a strong start in the face of adversity. Even though they couldn’t muster enough to score again, it was enough to give us what we’d been waiting for- more baseball, free baseball, Giants baseball!

A strong frame from the combined efforts of John Brebbia and Jose Alvarez shut things down in the top of the 10th, despite an early walk from Brebbia. The highlight of this half of the inning was a grounder to Wilmer Flores at third base, in which he opted to run down the ghost runner headed home rather than try for a double play. With the threats dispatched, Alvarez handed things off to the Giants offense, who put Mauricio Dubon on second to start as the designated ghost runner.

Mauricio Dubon has... an unfortunate tendency to play the game like it’s backyard baseball. His past seasons with the Giants have been littered with baserunning mistakes, and his worst impulses struck once again in the top of the 10th as Brandon Belt stroked what appeared to be a sacrifice fly, except Dubon changed his mind halfway to third. With a perfect throw to the cutoff man, Dubon was out by a mile as he tried to juke back to second base. In addition to crushing the Giants’ chances of scoring, it meant Belt’s at bat officially resulted in "flies into double play." You can’t make this stuff up.

Not that any of that matters. Darin Ruf walked, then Austin Slater smashed a line drive down the left field line. With Miami left fielder Jorge Soler shaded towards center field, Ruf turned on the wheels and chugged all the way home. He slid in safely, aided by a slightly errant throw home, keeping pace with the Dodgers and giving the Giants a walk-off Opening Day win.

The takeaways from such a chaotic game are a bit difficult to make with certainty, and that goes 162-fold for the first game of the dang year. But there are still some things that were at the very least affirmed yesterday.

The first is that Logan Webb is and should continue to be an absolutely dominant starter in the National League. When your primary strength is forcing hitters to make contact so badly that major league defenders don’t quite know what to do with the balls they hit, you’re doing something right.

This enthusiasm also extends to Thairo Estrada and Joey Bart, both of whom seem poised for breakout seasons. It’s too early to make any declarations, but they both showcased incredible talent on the field. Bart electrified the crowd with a massive dinger and held steady behind the plate, while displaying the kind of defense that could make him a plus-defender for years to come if he can settle in. Estrada showed both the good and the bad, but his highlight-reel play was, well, highlight-worthy. Keep an eye on these two, not that they’ll make it particularly difficult to.

The other takeaway is that the next two weeks or so should probably be taken with a grain of salt. Sorry to dampen the shiny prospect enthusiasm! But with four total errors in the game and some extremely volatile results, the players appear to be all over in terms of readiness. Webb and Brebbia pitched extremely well, while Doval and Leone had nightmare outings. Belt and Crawford were poised at the plate and on the field, while Estrada and Flores had some slip-ups. It’s hard to tell, for example, if Sandy Alcantara’s five walks in five innings was due to the Giants’ grinding approach to their at-bats, or if he’s still in the process of tuning up his pitches. It’s probably a mix of both, so as always, time will be needed to sort out the underlying problems from the early-season jitters.

Thanks for reading, and as always, go Giants!