Feeling pretty frustrated that just about no Giants are having seasons better than they were projected to have.

Just looking at position player hitting (in the interests of the time it took to make the chart), it looks like the OPS of most Giants players is worse than their preseason projections (the "Proj" column here being an average of ZIPS and Steamer). Panik, Crawford, Posey, Parra, and Mac have hit dramatically way worse than expected: 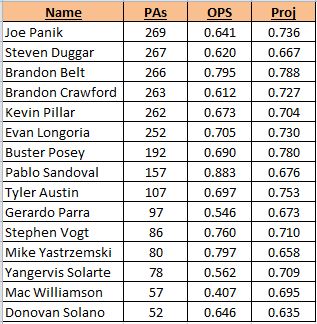 And this is after most of the Giants simultaneously failed to meet their pre-season projections in both 2017 and 2018. (as we probably all know, in mid-2016, Posey, Craw, Panik, and Belt all projected out to be a lot better hitters in three years than they are now).

I was hoping that the new Zaidi crew would help players to make the most of their potential in 2019. But that has mostly not been happening.

Moneyball 1.0 seemed to be about finding "the right guys" other teams weren't valuing enough - Scott Hatteberg to play first base, etc. But it seems like what smart orgs do now is use advanced analytics more towards having their biomechanics/modeling/analytics nerds find this one weird trick that will give guys already in the org an edge over the competition. (actually, of course, smart teams actually also seem to often be doing a combination of the two - finding available guys that they see a change they can make that will get better use out of the guy than their current team is.)

Dodgers bring up scrubs and they all look legit. Giants bring up wave upon wave of young guys that can’t do anything

Drivelinebaseball.com says that Dodger player development system's effectiveness - as defined as the difference in value in major prospects between entering the minor league system and when they have left - has been the best in baseball for the past eight years. They estimate that the Dodger development pipeline has been worth about $465m more than a default farm system's.

And I think that's just the guys who came up through the Bums' farm system and were a lot bigger deals leaving than they were arriving, guys like Bellinger who have no business being this effective - it doesn't even include even guys who came up in and washed out of other systems before the Bums created value from them - again, Turner, Taylor, Muncy, etc.

I hoped that Zaidi would have brought over some of that smart-org developmental coaching/analytics magic with him. But how many 2019 Giants would you say are having surprisingly good big league numbers this year, better than you expected at the beginning of the season? I'd say Panda and Will Smith, maybe Dyson, Gott, Vogt, and Yaz. Meanwhile, again, for the third damn season in a row, many of the main guys are performing worse than projected, sometimes much worse (Mac, Panik, Posey, DRod, Holland, etc). And a majority of players who have left the Giants this season seem to be doing the opposite of the Dodgers thing - their performance has gotten better not worse.

As you I am sure know, despite the fourth highest payroll in the NL, the Giants' current pythag winning %, .366, is the worst. It's also the third worst pythag % in Giants' history, only the 1901 and 1902 teams being worse.

I would have hoped the smart but untested new front office would be learn on the job, and adapt and get better performance from the team as the season has gone on. Unfortunately, it looks like the opposite is happening. The team had a .451 pythag in first 25 games but only .323 in the 48 games since then.

When Zaidi accepted the Giants invitation, I felt excited, and I was prepared to give him patience and leeway. I figured people would bitch about him if the Giants weren't contenders immediately, but I figured that that'd mostly the fans who think RBIs and pitcher wins are the best way to evaluate players and who would have demanded Luhnow's head on a plate during the Astros' 2012-14 rebuilding years. The Bums winning % and pythag in their first two years under Friedman were about the same as they had been in the previous two years - it's only in the last three years that his positive smarty changes have really been felt. And Zaidi wasn't the guy who signed all these bloated contracts, who traded Luis Castillo and Bryan Reynolds away, and who presided over whatever evidently sub-Texan hitting coaching Hunter Pence has been getting the past couple years.

Bottom line, I know it will probably take the Zaidi team years to turn things around. In general, I feel more patient with Farhan than he's been with a lot of the Giants' bit players :) . But I was hoping eight months would have been long enough for his team of smarties to have found one weird trick for at least a few of the guys besides Pablo.