Reviewing commercials is a step below recapping TV shows which itself is beneath ten tons of crap upon which rests legitimate writing. So here we are.

It's always important to remember what's been lost when looking back upon a lost season. While Bobby Evans tries to figure out if Mike Leake should get $16 million or $18 million per year, let's reflect on what we once had as fans. Namely, the spark of life in Buster Posey's eyes.

You see, Buster Posey is dead inside now. This season has snuffed out his spirit. PROOF:

There's staring off into the middle distance, the thousand-yard stare, and simply the look that says "I've wasted my life." But this look didn't happen overnight. Oh no. The slow slide into the abyss started at the beginning of August. All that's left is the end.

We don't have to remember *this* Buster Posey, though. Through the miracle of modern advertising, Buster Posey's spirit will live on... not in loops of Buster Hugs or something more baseball-oriented, but instead in a commercial for Esruance.

It's the first national ad campaign to feature a San Francisco Giant since "BUT THESE MONSTERS ARE STACKED!"

Before I dig in, what does Jane K. Public have to say about it?

A lot of irony-free hyperbole here, it seems. And a dude with an avatar of the main character from Esurance's parent company's (Allstate) advertising campaign is highly suspect. And there are only 24 comments on the video, too, most of them spelled correctly, and for YouTube, surprisingly free of racism, sexism, or outright stupidity. Although someone did give the video one thumb one (probably Yadi). Highly suspect.

But now it's my turn, and I'm going to give this sucker my honest, brutal assessment using baseball's 20-80 scale). Here we go:

Those eyes, that smile, the MVP award... the three rings... swooooooooooon.

You can tell this was shot way earlier in the season because of the spring in Buster's step and the life in his twinkling, somewhat mischievous eyes. I love how it's clear he's really going for it in this commercial. Don't think it's controversial to say that Buster's acting is on par with the vast majority of athletes, but here we find that he can pull off comedy pretty well and when he plays a Golden Boy athlete especially, he's able to channel his natural instinct for confidence on the field here on set. Now, of course, he doesn't actually get to say anything funny (see the writing section to know why) but he pulls off the material here pretty well. I was impressed, which, for the purposes of this review, is all that matters.

I did not believe she was pregnant for one second, but she definitely pulled off the "I ain't havin' it" attitude needed for this commercial. She too doesn't get much that's funny to say. Just considering "the world" of the commercial, I don't see her relationship with her Dumb Husband lasting long.

The slob husband-attractive wife stereotype feels like something that's 7-10 years old now which is why trotting it out here was a bit jarring. Of course, Dumb Husband actually got the two lines closest to jokes in this commercial: "Glove, clutch" and "Let him try" are pretty decent under the circumstances, and something about his voice (particularly on "Let him tryyyy") is funny. All in all, the performance was decent, but just considering "the world" of the commercial, Dumb Husband married way above his station. I think wanting Buster Posey to deliver your (presumably) first child is a spectacularly dumb idea that this lucky SOB cannot afford to push on his wife who will surely realize her marital error shortly after delivery.

There are FOUR pictures of a beach in this hospital room. However, the set is easily recognizable as a hospital room, so, nice job conveying the point.

It's pretty simple shoot with no camera moves, so it all comes down to framing. When you're shooting comedy you definitely want to shoot with a wider frame in mind because, presumably, you want to leave space for movement to add to the humor. The direction here doesn't get in the way of "the story" and it's such a simple setup that you could imagine Buster actually running in from AT&T after warming up Bumgarner (and before first pitch) or maybe even between innings.

Okay, perhaps *you* could not imagine that because you are a sane person. But if you're like me, then you could stretch to imagine that. I'm imagining that right now, in fact, as I'm quite mad, you see.

So, the premise of the campaign is that Esurance, by virtue of being an online insurance outlet, can tailor an insurance policy to the individual and not coldly categorize you based on the numbers you generate like every other insurance company does. Other companies look at someone "sorta you", or someone similar to you, and Esurance looks at you and compares you to nobody else.

Buster Posey runs in saying how he can basically approximate what this woman in the midst of childbirth needs. She is right to reject his claim and the insistence of her dumb husband that a baseball catcher be given the chance to successfully deliver their offspring.

There aren't any hard jokes in here, no real classic setup/punchline here, it's more of the modern comedy model of "near jokes" which are sold via exasperated performance or humorous inflection. And more importantly, the joke is on Buster Posey. Not cool, Ad Wizards who came up with this one. So not cool.

Buster Posey is the stand-in for Big Insurance. The husband, of course, is the dope who is going to get her killed if she listens to any of his ideas or follows his lead in any way. The wife is the only sensible person in the room who must insist repeatedly that she knows what's right for herself. It's a nod for "the customer is always right" and a subtle social reminder of the superiority of women.

However, if a Cardinals fan made this commercial, Yadier Molina would successfully deliver the baby and it would pitch 180 quality innings for the Cardinals as a nine-month old.

In conclusion, more marketing campaigns should feature Buster Posey. Comedy is a nice spoonful of jelly into which you might grind the sometimes unpleasant medicine that is capitalism. Most people will watch anything that has Buster Posey in it, too. This is a scientific fact.

Is "Sorta Doctor" something that should be listed alongside Buster Posey's many accomplishments in a Giants uniform? No.

Is it as memorable as other ad campaigns top-lined by stars of the San Francisco Giants? 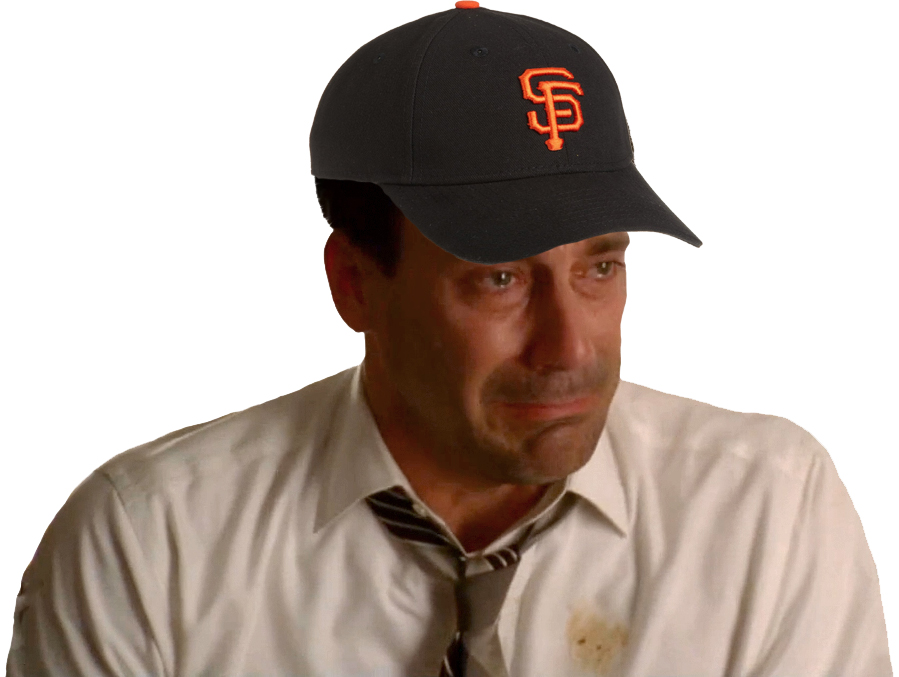