The A's and Giants both have a pretty good claim to Barry Zito. Here are similar players for the Giants and 29 other teams.

Earlier today, I made everyone look at an A's/Giants split-hat because I felt it was important/wasn't held as a child. I would do it again. I hereby declare its new name to be the Barry Zito Cap, and we should show some respect for it. Or, continue being repulsed by it. Either one.

Because it's Barry Zito day -- and because no one cares about my "Would we get excited to watch Aaron Rowand play?" think piece -- it's time to look at the players who can be claimed by the Giants and another team at the same time. Nolan Ryan has four or five teams that get to claim him. The Mets used him to win a World Series, he chucked four of his no-hitters with the Angels, he defined the Astros in the '80s, and he amazed the baseball world by continuing to pitch well into his 40s with the Rangers. Everyone gets to share.

Which players do the Giants share with the other 29 teams in baseball? Well, let's take a gander, though I'll limited the search to players from 1980 on for logistical/familiarity reasons. Meaning, hands off our Cepeda, Cardinal jerks.

Here are the shared-custody players for the Giants and the rest of baseball, in alphabetical order:

It was shameful that the Giants let him get away, especially when they were so close to contending. 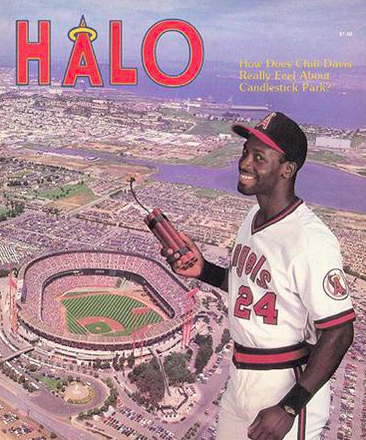 He was cool with it, though.

Obviously, but Vida Blue made a strong charge. My mom had a Vida Blue Cabbage Patch doll custom-made for some reason, and it's still pretty cool. Blue signed it and asked us not to stick pins in it.

Slim pickings here, unless you're a Doyle Alexander partisan. The Blue Jays remember Cruz as a long-time regular. The Giants remember him for a postseason boner. Cruz getting recalled by the Blue Jays before a highly anticipated Blue Jays-Giants series would be met with a much different reaction.

Evans is probably one of the four or five best players not in the Hall of Fame, and he did his best work over several years with the Giants and Braves. Russ Ortiz could make a solid case, but that sells Evans short. He was awesome.

Rest in peace, speedy leadoff man. Hamilton was a late bloomer for the Brewers, but he was still a popular, homegrown player for seven years. He was cool for the Giants and helped them get Ellis Burks, though he loses points for his dastardly role in ruining the J.T. Snow home run game against the Mets in 2000.

An obvious choice, depending on how excited you get about the idea of Willie McGee as a Giant. Clark hit a home run that ruined the Dodgers, though, so those bonus points put him over the top.

Mike Krukow had a surprisingly productive Cubs career, but Reuschel was close to a Hall of Famer. His late-career push helped the Giants win the pennant, and, really, all we're looking for are the players that fans of two different teams can agree on.

Oh, sure, you can go with Jeff Kent here. But there's a symmetry with Uribe hitting memorable series-winning dingers for both teams in the postseason.

The Giants don't have joint custody with Vizquel. They have very limited visitation rights. But when it comes to a "That guy's cool!" player that excites two different fan bases, Vizquel is up there.

This could also be Vizquel, but Bill Swift was the strongest runner-up. The Mariners traded a manager to get Winn, which never fails to amuse me.

He's tied with Livan Hernandez, but Nen's service in the 2002 postseason, with his shoulder hanging on by a wet Kleenex, pushes him over the top. You've never agreed with a Marlins fan until the moment you sidle up next to them and whisper the name of Robb Nen

Joel Youngblood has a case. So do Jeff Kent and Kevin Mitchell. But Youngblood was more of a utility player for the Giants, and Kent and Mitchell were just okay, at best, in New York.

This works because a) he pitched a ton in Montreal and Washington, and b) that was not a weight joke, so back off. Kirk Rueter was about one more full season with the Expos from wresting the crown.

Tough list. Maybe Miguel Tejada can make it if you feel morbid. Aubrey Huff and Will Clark are probably the best answers, but they've already been used.

Man, how this must annoy Padres fans. He was their Lincecum! Imagine Lincecum on the Diamondbacks or something. Just grody.

He helped save the Giants' 2010 season, which in turn crushed the Phillies, and he works for the Giants as a scout now, so his Philadelphia bonafides needed just a touch of freshening up. But he eventually signed a one-day contract with them, and all was forgiven.

Calm down, Rennie Stennett fans. This one has a strong case.

Sigh. Of course, the Giants went with Robby Thompson because they were worried about Clark's durability, and they were half-right. But why not sign Will Clark? Why mess with that weird anti-chemistry.

Randy Winn could go here. Matt White cannot go here, seeing as he never made the majors. Yeah, I might be still mad about that. A little.

Ellis Burks was the better player, but Mueller had the iconic moment for the Red Sox, and he was just about the only player the Giants developed in 15 years.

Cheating, yes, but iconic home runs count for a lot. Although if I use Jeff Brantley, I could tell my previously unwritten tales about how Brantley saw me in West Side Story once.

This was the first clue that Sabean was wise beyond his stereotype. He could cut through the noise and determine that Burks would be just fine out of Coors Field. No one else did at the time.

Very slim pickings here, with the only other consideration being Melky Cabrera. Which ... hold on, that one's funnier. But Affeldt was a serious and ultimately disappointing prospect for the Royals a few teams before he was a postseason relief ace for the Giants

Hey, look! It's a useful young outfielder developed by the Giants in the '70s and discarded, allowing him to thrive somewhere else! Well, how about that.

He's still announcing for the Twins, and like Davis, he never identified as a Giant after leaving. Still, it was this or Joe Nathan, so ...

So, so, so underrated as a Giant. He was completely misunderstood, though his second-to-last season with the Giants is still one of the worst from a starter in franchise history.

Perfect. Just perfect. (Although if this disturbs you, you can put Dave Righetti in this spot. No one will mind.)