Where does Matt Duffy rank among the best rookies in San Francisco Giants history? The answer might s ... actually, no. It won't surprise you. Dude's good.

Share All sharing options for: The greatest rookies, position by position, in San Francisco Giants history

Matt Duffy is taking the world by storm. Everyone wants a piece of ol' Matt Duffy, rookie sensation. This recent FanGraphs article charts the upward trajectory of Duffy in the race for National League Rookie of the Year, and while Kris Bryant is still the statistical and scouting favorite, it's a much closer race than anyone anticipated.

It's not just Duffy, though. Chris Heston also makes an appearance on the chart. Not bad for a pair of prospects who combined to crack the Giants' top-10 prospect list just once (Duffy was #9 for Baseball America before this season). This is something of a golden year for Giants rookies, though we'll wait until closer to the end of the season to see how it stacks up to other years, like 1986. For now, we'll just go position-by-position and cobble together the best rookie team in San Francisco Giants history.

Everyone on this gets one of these mailed to their house.

Please do not store fruit in them, as they are made almost entirely out of lead.

WELL, MY STARS, AN UPSET.

It was actually closer than you might have thought! Tom Haller had the same number of homers and a higher on-base percentage in 100 fewer at-bats. The WAR doesn't really account for Posey's calming glow and steady voice, though, so adjust as you see fit.

Haller did not win the World Series in 1962, so Posey also gets the bonus points. I wasn't even alive in '62, and that Series still makes me so very sad.

You might not be surprised, as McCovey was a celebrated rookie who won Rookie of the Year, but it's still amazing considering that he had only 219 plate appearances all season. The full list shows off just how remarkable his two months really was, as he beat out Orlando Cepeda, who hit 25 dingers and led the league in doubles as a rookie first baseman just the year before.

Brandon Belt's 2011 and Travis Ishikawa's 2009 were tied at 0.9 WAR, which probably means something.

You gotta like these kids, by lawful decree. Thompson was Joe Panik's spiritual successor, and he finished second in the ROY voting that year to Todd Worrell. A closer. The nerve of those voters. He didn't have the highest WAR among rookies that year, as that title went to Barry Bonds, who finished sixth, two spots behind Charlie Kerfeld.

If you were curious about how much defense can influence WAR, well, the full list is for you.

Speier more than doubled the WAR of the next player on the list, Jose Uribe, and he ended up being the greatest shortstop in SF Giants history ... for now. That fella with the hair is comin' for you, Speier.

This is the best rookie season in San Francisco history from a position player, so it's comical that Duffy is even coming close. Hart hit 31 homers with an .840 OPS, and he was one of the best third basemen in baseball for five years. His body was a jerk, though, and he played in more than 100 games just once after turning 26.

I looked to see if Hart was ever called "Jim Ray Hurt" by bad people, and discovered that Google's newspaper-to-digital-text converter is still a work in progress.

Oh, the Giants had so many outfielders pass through their hands in the '70s. Dave Kingman, Bobby Bonds, Garry Maddox, George Foster ... but Matthews actually won the ROY with the Giants, which makes it extra annoying that they let him go.

Brandon Belt making the list was surprising, as I forgot he started more games in the outfield in 2011 than at first. Top five:

Uh, this is why they generally get their left-fielders in free agency. Kensuke Tanaka was seventh, too. (Full list here.)

Imagine being a fan in 1984 and 1985, counting on Gladden to be a cornerstone of the rebuilding project ... only to have him ditched right when the Giants were about to contend, for Bryan Hickerson. So weird.

If the Giants have Gladden in center, Chili Davis in right, and Candy Maldonado off the bench, they go to the 1987 World Series and sweep whatever non-Twins team gets there. Not that I'm still thinking about this stuff. Full list:

Bonds was in center because the Giants had a pretty good center fielder in 1968 named Ty Cline, so he's kind of a ringer in right field. The full list has Fred Lewis and Nate Schierholtz basically tied, which is about right. There's a special cameo from Peter Bourjos's dad just after that. Top five:

The best rookie season in San Francisco history, and by a wide margin. Montefusco had one more season as a star, and then spent the career in the useful/fragile zone, unfortunately. Arms are jerks.

As you might expect, the recent Giants are represented well, but it takes a little bit to get there. Top 10:

Chris Heston is 14th, just behind Juan Marichal, because of course that's a sentence I was expecting to type.

Linzy was the winning pitcher in a 1-0, 21-inning game that would have killed us all, and he was an excellent fireman for the Giants for several years.

And don't forget that Al Holland is one of the reasons why you're not listening to awful announcers right now. Never forget: 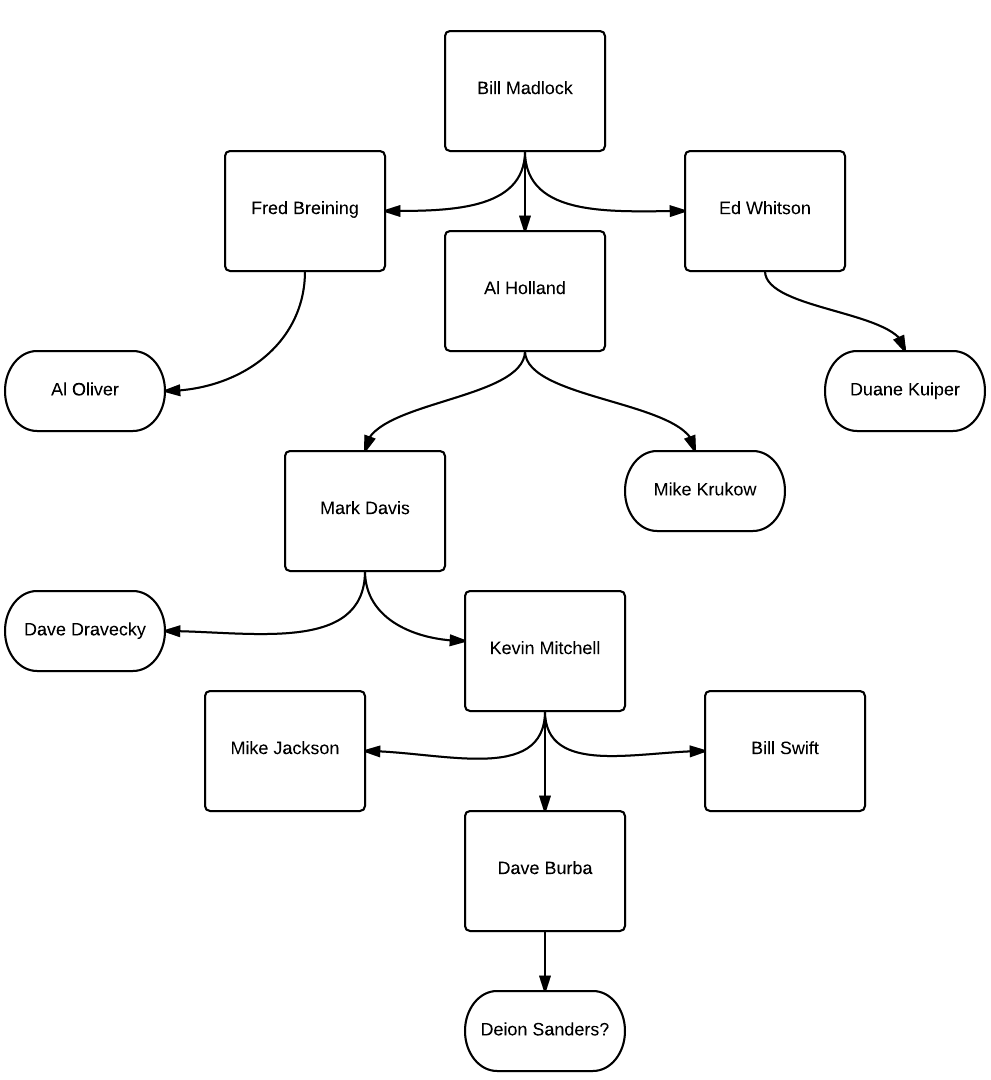 Brian Wilson is under Jean Machi on the list, which sets up a fart joke that I'm simply too classy to make.

What have we learned? That Matt Duffy is already one of the best rookies in Giants history, even though it took him a while to push his way into the lineup, and even though there are still two months left. You knew he was having a great season, but maybe this helps a little with the perspective.

Or maybe you just wanted to think about John Patterson for a bit. That's what this site is here for, really.