And let's rank the Pixar movies while we're at it.

Share All sharing options for: Brandon Crawford is visiting Pixar today, so let's match current Giants up with Pixar movies

I'm at Pixar HQ visiting a friend who works here and Brandon Crawford came in right after me. pic.twitter.com/dO9OfEJEol

Just taking a little family time before heading over to the ol' ballpark. Looks like fun. Good for him!

Naturally, this requires us to match up every Pixar movie with a different Giants player. Note that these, as usual, are correct and inarguable. Don't even think about it.

1. Toy Story - Buster Posey
Basically perfect. Was the genesis of three untouchable entertainment experiences (though not in five years). There was a moment in Act II, when you thought everything was ruined forever, but instead everything remained perfect and order was restored.

2. Inside Out - Tim Lincecum
Sad. Uplifting. Memorable. Real. You can't stop thinking about it, and your life is richer for the experience.

Also, Bing Bong is his fastball.

3. Finding Nemo - Matt Cain
There's a sequel coming. Will it be as outstanding and peerless as the first one? No, there's no way.

I mean, maybe. But probably. not.

But what if it is as good as the first one?

What if? Wouldn't that be simply amazing? I can't stop hoping it will be.

4. Up - Hunter Pence
The first part made you cry. It was so depressing. It made you wonder if it was worth staying for the rest of the ... and then it got good. Then it got great. Then it became one of your favorite movies of all time. 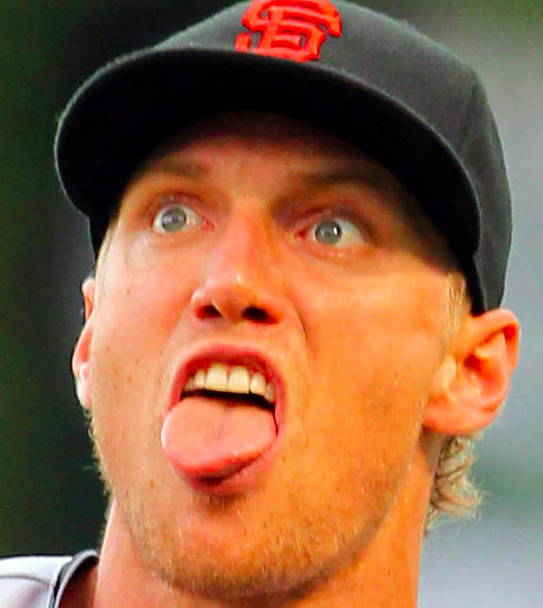 5. Wall-E - Madison Bumgarner
Not a lot of talking at first. Eventually you got attached, and then he saved the world.

Is it hard ranking these Pixar movies? Yes. Yes, it is. It's kind of like ranking your favorite Giants. Try it. Quick, Buster Posey or Madison Bumgarner, which player do you like more?

6. Toy Story 2 - Brandon Crawford
Like the sequel to Finding Nemo, I had low expectations. Sequels are usually dumb. This was probably going to be a waste of time. Instead, it was transcendent and got better on each viewing.

7. Toy Story 3 - Joe Panik
Okay, okay, okay, we get it. You can apparently make sequels/middle infielders out of thin air that are somehow so much better than anything else anyone is coming up with. At this point, you're showing off.

8. The Incredibles - Ryan Vogelsong
When he was toiling in the minors, he was as dissatisfied as a very large man at a very small desk in an insurance company, watching his life slip by. Then he overcame the odds.

Are these getting to be a stretch? Well ... okay, yeah. But think about the Inside Out one again!

9. Ratatouille - Matt Duffy
It's a movie about a rat learning the ins and outs of French cuisine, dipping his nasty rat paws into soup and coming up with something gourmet and sublime.

The nasty rat paws are Duffy's college stats. I don't know how it ended up good, either. But I'm sure glad it did.

10. Monsters Inc. - Jake Peavy
Doesn't have the staying power as some of the other names above, but the memories are overwhelming? Basically, I like both of them.

11. A Bug's Life - Brandon Belt
Why do people keep giving them crap? Don't people realize how good they are? They're awesome. Show some respect.

12. Monsters University - Tim Hudson
A prequel to Jake Peavy. Had some great moments, certainly. Will take the first one, but that doesn't mean I'm sorry the second one exists.

13. Brave - Gregor Blanco
Better than what a lot of teams/studios could put out there, but it suffers in comparison to everything else up there. That's not fair.

Some people were basically suggesting that Brave should be designated for assignment at one point, and those people have bad opinions.

Blanco running the bases is kind of like someone deciding to make a movie about the search for a mom-bear, though.

14. Cars - Barry Zito
Made soooooooo much money in exchange for disappointing production. But had its moments, alright. I do not have a shred of regret about the whole experience, all told.

Apologies to Angel Pagan and Chris Heston, one of whom is probably The Good Dinosaur, but we just don't know it yet. Had to get Zito in there. Also, everyone in the bullpen is one of the shorts before the movie. Most of them are outstanding.

Please note those rankings are also the correct Pixar movie rankings. Like other lists on the site, this one is objectively correct, and we ask that you do not clutter the comments section with disagreement and debate.