Here's an update on how ex-Giants are playing overseas

How are Nate Schierholtz and others doing in Japan and Korea? Let's take a gander.

Share All sharing options for: Here's an update on how ex-Giants are playing overseas

Nate Schierholtz signed with the Hiroshima Carp just after the season started, and he recently signed a deal for the 2016 season, so that means he's doing just fine there, right?

Let's find out. First, note a Japan Times feature on Schierholtz from last month that might be of interest:

He’s picked it up in a big way since getting his feet under him a little more, hitting .314 with all six of his homers and 17 RBIs since May 17.

"It’s been an adjustment," Schierholtz said. "I guess you don’t really know what you’re getting into when you first come over here. Not in a bad way at all, it’s been a great experience so far. It’s just a constant game of adjustments.

He's hitting .269/.310/.457, which doesn't sound like much, except the OBP is league average and the slugging percentage is far above the league average. He's doing fine.

Other old friends? So glad you asked because I'm going to tell you anyway.

Randy Messenger has a 3.13 ERA with the Hanshin Tigers, striking out 113 batters in 115 innings. I have no idea what his hat bill looks like.

Guillermo Moscoso is struggling with his command, with 19 walks in 35⅔ innings and a 5.30 ERA. He was pretty okay for the Bay Stars last year, but he's struggled with injuries this year.

Jesus Guzman has been limited to 30 at-bats with the Carp because of injury. Remember when everyone was mad at him for flipping his bat against Madison Bumgarner? I do. Let's watch that Hector Sanchez grand slam again ...

Eric Hacker is thriving with the NC Dinos in Korea, with a 10-3 record and a 3.09 ERA. If you don't remember him, how dare you. Dude has more World Series rings with the Giants than Barry Bonds and Juan Marichal combined.

And, finally, Henry Sosa has a solid 4.6 strikeout-to-walk ratio for the LG Twins, and his 4.30 ERA is a full run below the league average. He's also a reminder of Jeff Keppinger and general odd-year shenanigans, so keep your guard up. 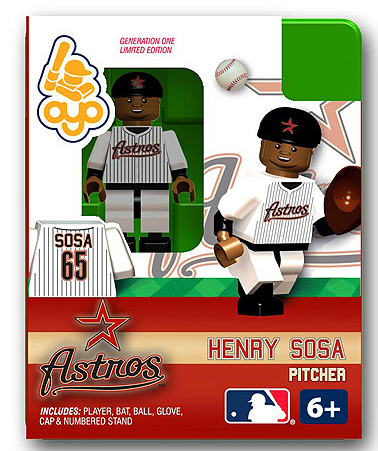 Available in the McCovey Chronicles Gift Shop ... as soon as that's open for business.