Oh, so this is going to be a season of streaks, a six-month mess of wild ups and downs, where you're violently ripped from one truth to a mutually exclusive truth and back again. The Giants are awful, unless they're great, unless they're awful again.

But I have a heart condition.

Shut up, you. We're in the middle of June in an odd year. Don't you see? This is when the moons are aligned with Scorpio and the blood rituals demand a human sacrifice. Might as well be you.

In other news, the Giants aren't playing so well right now.

The Giants were 5-for-28 with runners in scoring position for the series, which almost sounds reasonable. Hey, a .179 average is better than I could do. Except two of those hits didn't actually score the runner in scoring position, which is kind of the point. The hits that came last month aren't coming now, and in their place are elevated sinkers and general boners. It's a mess on every level.

The worst part is that the Giants got good starting pitching. That's when they're supposed to do well. That's the formula. Instead, the losing streak continues. And you know what? Screw it. Say it loud and proud. June Swoon. Juuuuuuunnnnnneee Swooooooooooon. This is the Giants' legacy, remember. The first mention of June Swoon in the New York Times: 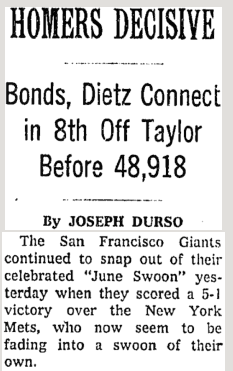 Remember, the Giants haven't had a June swoon every year, but they've sure had one in each of the last three seasons. And the thing about June is that it comes right when you think you have a team figured out, so it stings even more.

This is the portion of the program in which we talk about Norichika Aoki's baserunning. It is comically bad. This isn't just an overreaction based on a rough game: The abacus twiddlers agree. He's been a wild runner for a long time, and it's not something his speed can make up for.

In Wednesday's game, he was at second with two outs and he tried to steal third. Which is basically like going up to the plate with a runner at second, flipping the bat away, and saying, "Get out of here, bat! I'm going to hit this with my mind." It's hilariously unwise, a stealthy bravado that makes no sense.

One time, in little league, I was thrown out stealing third with two outs and the team down by two. My run meant nothing. The dad driving me home asked me if it was a called steal. I lied and said, "Yes." He then passive-aggressively informed me that the decision was selfish, dumb, and pointless, but he used much nicer words. And that is the story how I learned the value of situational thinking on the bases when I was 13 FREAKING YEARS OLD.

For a moment, I started to justify the decision, thinking that Aoki was one step ahead of us all. Liriano was dominating with his slider. Liriano's slider is effective when it's kept low. A runner on third might make him wary of bouncing the slider, which increases the chance that he hangs one. So it was supposed to be something that helped Angel Pagan at the plate.  Or if the pitcher doesn't change anything, the odds of a wild pitch are worth the risk. Hey, if they're just going to give you the base, why not? He just miscalculated that gift.

Except, no. No, no, no. You do not steal in that situation. There is reward, but it is lying there, dead, having been murdered by risk. Throat torn out, blood everywhere ... you don't need to see that.

And then, in the eighth, with two on and no outs in a one-run game, Aoki broke for third on a liner hit right to the shortstop. Tim Flannery had a great breakdown of this specific failing on the CSN Bay Area post-game show, saying runners should automatically shift their weight toward the back bag on a line drive. The first instinct, to run run run, is a primal instinct that should have been broken with years and years of baserunning experience.

Instead, Aoki is going to follow the Aoki handbook until it lands him in Aoki jail, where he sits quietly after that game. He's still a good player, and the positives outweigh the negatives. But, man, was that a dippy game of baserunning.

Again, you'll rarely read a bad word about Bruce Bochy's resistance to the sacrifice bunt here. Someone showed him the math, that sac bunts lead to fewer runs, not more, and he changed his mind. That's admirable as all heck. It shows a capacity to learn, change previously held convictions, and buck conventional wisdom. I love it.

That written, I'm certainly a fan of the speed runners doing one of those dealies where they bunt for a hit and accept a sacrifice as a consolation prize, especially in the late innings of a one-run game at home. In real life, Pagan hit a line drive, which supports the Bochy world view. It's not the manager's fault that he has a spacey, butt-ankled runner out there.

In theory, though, that's the moment I'd want to see again in the alternate universe. Maybe the defense makes a play, and maybe they don't. Maybe Pagan bunts it back to the pitcher and starts a triple play. But for all the loathing I have for kneejerk sacrifices, I do enjoy a good bunt-for-a-hit when it has a delightful consolation prize, especially when the hitter in question is in the middle of a hardened, calcified funk.