The Giants, who once lost eight straight games and died in the Cactus League, are now a half-game back in the NL West.

Think about all the years of baseball the Giants have played, both here and New York. Game after game after game. Baseball started before there was an "Internet" or "motor car" or "penicillin", so someone back then said, "Got a great idea, let's make them play well over 100 games." So they did. And now, hundreds and hundreds and thousands and hundreds of games later, here we are. It's been a long time.

In this long time, the Giants have had four consecutive shutouts at home on two separate occasions. We're talking Polo Grounds, Candlestick, Seals Stadium, anywhere. One streak was in 2012, when the Giants swept the Dodgers without allowing a run, and then shut the Reds out in the next home game. The other is the stretch you're watching right now, in which they also swept the Dodgers without allowing a run. Both stretches had an additional inning tacked on the end of the previous game, too.

There have been only 12 home shutout streaks of three or longer in the long history of the franchise, the majority coming when they were in New York and the average ballplayer was 5'5", with both rickets and scurvy because he lived on a diet of weevils and sawdust. Look it up, it's horrifying.

Point is: This is unusual. It's freaky. And you haven't even gotten to the freakiest part, yet. Of those 12 home shutout streaks of three games or longer, one is happening right now. And one happened three weeks ago. There was a shutout against the Angels and two against the Padres in the early part of May. That makes eight shutouts in the last 14 home games. That's not normal. Remember, this was the lede of one of these literally a few months ago:

The Giants won a series at home for the first time since July 13. It was the first time the Giants had won consecutive games at home since June 7-8, which was also the last time we thought the Giants were unambiguously good. If you're looking to set off some firecrackers and invite some friends over, I wouldn't blame you.

Then the Giants won the World Series, then they played like dorks, then they started shutting everyone out at home. I don't even know. Generally, they're pretty good at AT&T Park, with the peaks and valleys that you might expect from baseball, but this is otherworldly.

The National League ERA leader came into AT&T Park with his absolute best stuff, pitched an almost perfect game, but allowed one run. You fool. You can't do that ... at this exact moment in time ... when the Giants are in the middle of an inexplicably freakish streak like this. I hope you've learned your lesson, Shelby. Ha, that's a girl's n ... 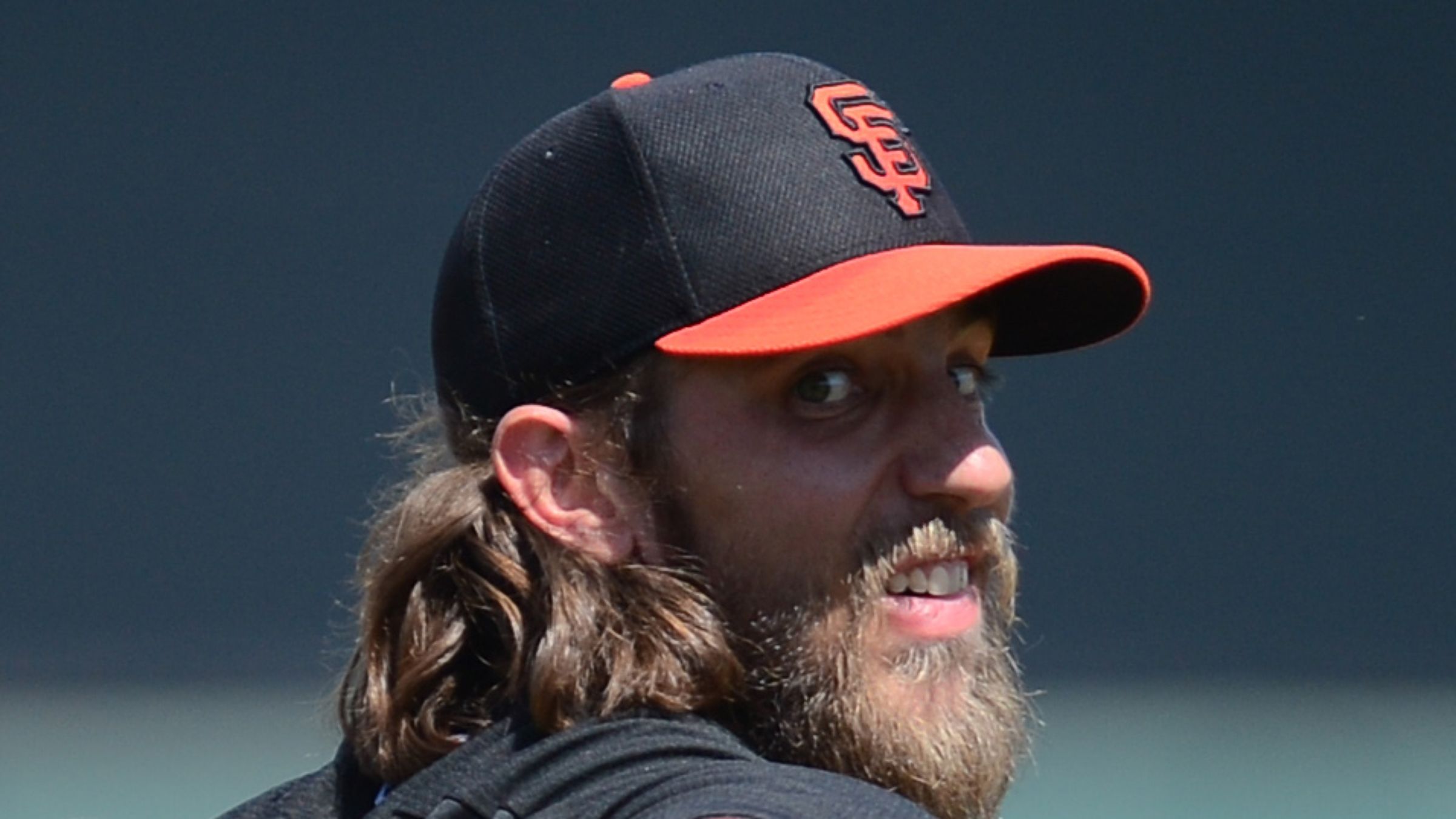 Poor Juan Uribe: Was here last week for three Dodgers shutouts ... gets traded to Braves ... is part of tonight's shutout.

Seriously, though, that felt like a game with three options.

We were going with option two, for a while. Brandon Belt, who is apparently Mo Vaughn after a month on the rack now, hit an opposite-field homer off a pitcher who made maybe one other mistake on the night. Then the Giants exploded with both a) bullshit in the form of infield hits and b) doubles and doubles and a triple. That's the magic combination, the secret sauce. Singles and singles and bullshit and good at-bats and DOUBLE. The Giants just got a lot more of that in one inning than we're used to. They usually spread it out over two or three innings.

Instead the Giants did it all and won by a bunch-to-nothing. Please, someone, link to this recap when I'm complaining too loudly in June.

Which brings us to Chris Heston. Jake Peavy's coming back, you know. Someone's going to get pushed out. Go down the list and see who the easy choice is. Not the furry dude with the World Series résumé. Not the long-hair. Not the guy with a string of quality starts in May.

Who, then? I don't know. The Mets are going with a six-man rotation for the moment, so maybe that's a option. I can answer a part of that question in the negative, though. Not Chris Heston. He's an uncomfortable at-bat, and you can see it in the body language of the opposing hitters. The movement is quick, and the breaking balls break when they're supposed to. It's a nasty combination, and it makes me study the Triple-A numbers from two years ago and wonder how in the ... aloud. He's clearly a major league pitcher, though.

They should have a reality show for the rest of the pitchers. Make them achieve goals to move on. Have them dance for a vote from the studio audience. Force them to take the Strike Zone Challenge, which would be a hilarious, glorified carnival game. Create a "Golden Rosin Bag" that would prevent the recipient from getting eliminated. But not Heston. He's exempt. Until his next bad outing.

In his last action of the night, Heston was gassed. He left sinker after sinker up in a one-run game -- three straight, by my count -- but on his last pitch of the night, he made a hitter pound a grounder into the dirt. It should have been a double play, but the Braves' dude was supernaturally fast. Still, that was the best possible exit for a performance like that. Sink or die.

There is no better Buster than cocky Buster.

Yeah, that's a called third strike and nnnnrrrrroooommmpppppmmmm later. I'll take your call off the air, thanks, Blue.

Until then, think about this: A.J Pierzynski behind the plate, wearing heavy armor, telling his pitchers what to throw in the eighth inning and failing miserably at it.

"Throw the fastball right here, right here, buddy, give to me on the inside ... aw, nuts."

"Okay, Hunter Pence is probably ready for your first-pitch fastball, but ... screw this, I quit."

Thinking about that almost feels as good as a fourth straight win. Half-game back. If you thought trolling the world got old, well, it doesn't.