The Dodgers are better than the Giants, and that's okay

Share All sharing options for: The Dodgers are better than the Giants, and that's okay

Please, hold your questions until the end.

Here's an example of what I mean: The Giants are 4-10, and the Dodgers are 9-3. So imagine that every time the Giants lost this year, every stupid loss, was actually a brilliant and exciting win. And imagine that every rare Giants win, that oasis in the barren desert, was actually a rare loss. That's basically what the Dodgers have enjoyed this year. They've enjoyed the opposite season of the Giants, which must be very nice indeed.

You might think those slides are a little flip, or perhaps that they're an exercise in hyperbole. This is not the case. I want you to line the two rosters up, position by position and pitcher by pitcher, and tell me which Giants player is clearly better than his counterpart on the Dodgers. You like Brandon Belt? They have Adrian Gonzalez. Hunter Pence is a marvel, right? They have Yasiel Puig, who is still young enough to get much better. Madison Bumgarner is so very special. But if you're objective (and give him a pass on the postseason thing), Clayton Kershaw is clearly better. This is the case for every position on the roster.

Except for sweet, sweet Buster Posey. If you wanted to start hitting now, Buster, we wouldn't stop you.

Seriously, though, every position is, at most, a toss-up. Carl Crawford and Norichika Aoki are similar. Maybe you don't trust a rookie like Joc Pederson over a seemingly healthy Pagan. Maybe you don't trust an old-timer like Jimmy Rollins to outplay Brandon Crawford. Other than Posey, though, it's either exceptionally close or an absolute blowout from the first through the 25th spots on the roster. This, even though they're literally starting Juan Uribe at third base. The Giants couldn't scrounge up anyone better.

This comes up now for a couple reasons:

1. The Giants bum me out right now, so I'm passing that along to you

I've tried to be optimistic, at least in part, over the last two weeks about the 2015 season. It's wearing on me. Now look at this repugnant and evil team coming into town, this Reagan-era movie villain challenging the skinny kids to a fight. They're all flashy and obnoxious after an excellent start to the season, and it's wearing on me.

So, here. You take this.

2. To remind you this isn't new

This is the third straight season in which the Dodgers have been better than the Giants. This isn't a recent phenomenon -- this is sort of the new status quo. Things have worked out recently for the Giants, so maybe it's not that big of a deal? Or maybe Posey makes up for a lot more sins than we give him credit flr.

There was a time when this site was temporarily named after Mike Schmidt, you know. 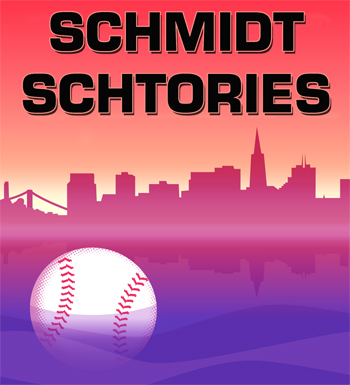 Indeed. So strong was our desire for the Phillies to win in the NLCS, this site switched logos for a week. In 2008, the Dodgers had a roster that was exponentially better than that of the Giants, and they made the NLCS. The gap wasn't quite as big in 2009, but the Dodgers still made the NLCS. This was probably the baseball moment that Giants fans enjoyed the most over a two-year stretch:

It's all we had. Can you imagine if the Dodgers won in 2008? Or if they won in 2009? Or if they won in both? If you think Giants fans are surly and bitter in an odd year, you have no idea what we would have been like after that. And, yet, that didn't happen. Even though the Dodgers have had the better roster in eight of the last 10 seasons, it's the Giants who have had the magnificent, historic run of success.

So if you're saying the Dodgers have a better roster, well, of course they do. They usually do. If you let that depress you, you haven't been watching for the last few years. Somehow, the Giants have squeezed in a lot of swell baseball, despite this handicap.

3. To help you look forward to the little things

Even when the Giants are lousy beyond reason, they can still make the Dodgers sad. They did this to them:

And then they did this on the very next day:

It didn't matter that the Dodgers had the better roster for those games. All that mattered was that Eugenio Velez and Aaron Rowand both have more World Series rings now than Clayton Kershaw, Zack Greinke, Andre Ethier, and Yasiel Puig do combined. Wait, no, I meant to type, all that mattered was that the Giants won those particular games, and everyone in the stands got to cheer for them. Even in the down years, there are up moments. There's an average of one walk-off against the Dodgers every season. Those are splendid.

Still, even if the Dodgers are coming in on a high, here's the TL;DR version:

That last one wasn't referenced in the paragraphs before it, but it seemed important to note.

Longer story even shorter: I still look forward to Giants/Dodgers series, no matter what the circumstances are, no matter if the Dodgers seem to be the much better team. There's a substantial risk/reward from an emotional standpoint, and the rewards are always worth it.

Go forth, Giants, and surprise us. Stop playing like bonerfingers and win a couple games. Three would be best.