The sweet-swinging left-hander was the unquestioned starter all offseason, just a few months after being behind Dan Uggla on the depth chart. What will his 2015 look like?

Share All sharing options for: How will Joe Panik do for the Giants in 2015?

Take a moment to think about Joe Panik.

I saw that. You checked your phone like a typical modern twit. Seriously, take a moment to really think about Panik. The Giants spent most of the '60s with a roster sprinkled with Hall of Famers and All-Stars, manufactured young outfielders in the '70s, won the pennant in the '80s, signed the best player in baseball in the '90s, and watched that player break all sorts of absurd records in the '00s. Yet they probably don't win the World Series in 2014 if they don't have Joe Panik. Baseball is an impossible legal document that you have to sign in 583,295 different places if you want to win a championship. Panik was the initial-here on the back of page 34,932.

He was also supposed to be a boring first-round pick. Which was odd, considering any value you get from the bottom of the first round is beating expectations. Panik is probably a season or two from vaulting past Joey McLaughlin into the top-10 all-time list for #29 picks. Drafting someone there with a safe, boring ceiling might be something between the next Moneyball! Or it might be safe and boring.

KER-POW. Sorry, I'll cool it with the Panik highlights from the postseason. That's not a smart, rational way to prove our point, here.

The projection systems, as well as analysts/scouts like Keith Law, aren't quite as impressed with Panik.

These systems don't hate you, your favorite sports team, or America. Probably not. They're emotionless, barely sentient spreadsheets. They suck up the minor league numbers, compare them against players who had similar numbers in the past, and spit out major league projections based on what those other players did. History tells us that Panik probably isn't going to hit for enough average or power to be anything close to an above-average hitter. Not yet. All of those systems suggest that he'll have enough defense and baserunning grit to make up for it, but don't expect a repeat of last year's .305 batting average.

Those disappointing projections are based on a couple of things: Panik had a .343 batting average on balls in play, which is higher than the typical player (while not obscenely so), and he has never hit for a lot of power, even doubles power, in the minors. A lack of power usually means a player who can't turn a superior eye into gaudy walk totals. Major league pitchers generally have the ability to challenge hitters, partially negating the talents of even the most disciplined hitters if there isn't the threat of a double behind it.

If you're going to project good things for Panik, you're essentially taking a leap of faith that he can develop gap power.

KER-GAP. That was the only ball Jarrod Dyson didn't catch in 2014. Good timing. Panik had another double in that game, roping that one into the right-center gap. Which, again, doesn't prove anything about what he'll do over 600 plate appearances. That's just what we remember so vividly. We remember him ripping doubles, so if the question is "Can Joe Panik hit doubles?", it's been answered several times over.

But back to that dinger. For months, I harangued you with Bill Mueller comps for Panik because a) Mueller was one of my favorite players, b) I need a new Mueller because the old one got chummy with the Dodgers, and c) the swing really is similar. 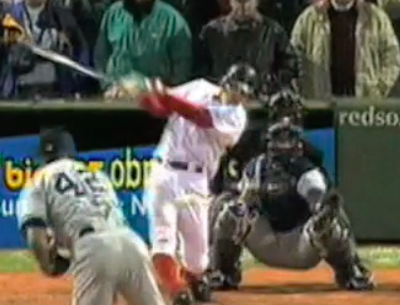 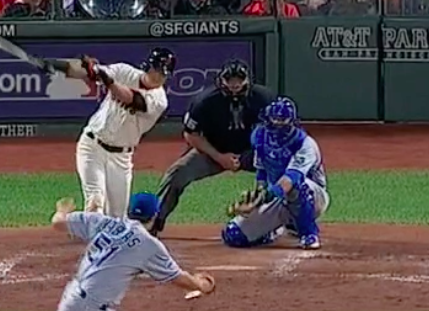 Also, you used to watch baseball on a broken Watchman every night, according to the quality of that screenshot. In the postseason, Gregor Blanco provided sweet, sweet validation of this theory, bringing up how Panik crammed before Game 5 of the NLCS. Eventually, Panik revealed his Mueller-related secrets.

"Just kind of visual memory, telling my brain what to do and how to do it," Panik said. "Just how (Mueller) kind of cleared his hips to let his hands through. It kind of brought me back to what my St. John’s (University) hitting coach always said – keep your hands tight to the body. Watching that, everything kind of clicked."

Which brings us to the math and logic portion of our projection:

If Bill Mueller could hit for extra-base hits (including 45 doubles and 19 homers in 2003), and

If Panik is just like Mueller, as proven by a pair of grainy screenshots and an anecdote

I dare you to find a flaw in that ironclad logic. Absolutely dare you.

Okay, then. I'll split the difference. I don't think Panik will coast through the majors with solid defense and Emmanuel Burriss power, but I'm not going to project him for 30 doubles just yet. I'll take the over on those projections up there, but not egregiously so.

Not a star. But he was never expected to be, and he'll never have to be. He could be our little secret for the next decade if he hits a little more than that and fields like he's supposed to