Photo of the day: Marvin Benard makes a great catch

Sure, 90 percent of all outfielders would have been standing under the ball because they didn't break in first, but that's nitpicking.

Share All sharing options for: Photo of the day: Marvin Benard makes a great catch

I'm secretly thrilled that the Getty archives in the SB Nation photo tool don't extend back to 1958. It would expose me. I can't look at a picture of Jim Ray Hart and start spinning yarns. I'm still trying to reconstruct Giants lore anecdote by anecdote, and it's going to take me 88 years at this rate. I can't fake a good Bobby Murcer story.

However, this is not a current concern because the photo tool is loaded to the gills with Marvin Benard pictures. Yeah, I can ... where are you going? I have three hours to kill, and I have Benard things to get off my chest.

The picture up there probably doesn't do this catch justice. Here's one you can click on: 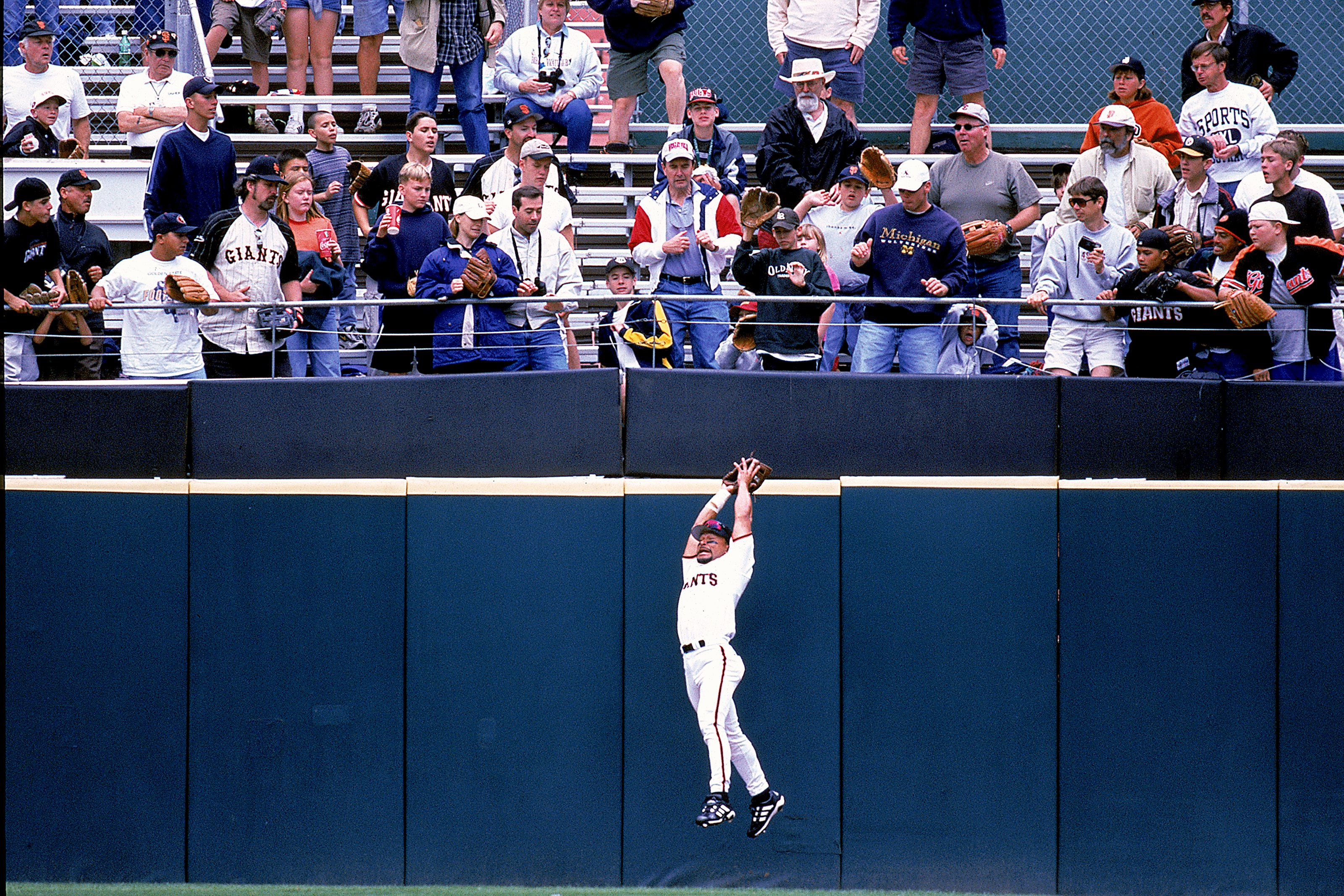 Zoom in. Are you in the picture? Probably. You're so much older now. What happened to you?

Benard was not as beloved as he should have been. Even worse, he was something of a lightning rod for criticism. This seems weird in retrospect. He had the disadvantage of playing next to one of greatest players in baseball history, but he was still a scrappy go-getter who did (some of) the little things right, the best 50th-round pick in draft history1. The case against Marvin Benard, though, went something like this:

Add it up, and it was easy to focus on what Benard couldn't do, rather than would he could. Yet look at the Baseball-Reference similarity scores for him. The top three are Austin Jackson, Dexter Fowler, and Gerardo Parra. The best one is probably Fowler, considering the defense, and he was valuable enough to get traded for a couple of prospects in his last season under contract.

Benard was usually worth a win or two over replacement, so don't take this as a lecture chastising everyone for not recognizing his brilliance. But there were almost always bigger problems with the Giants. In 2000, when there weren't a lot of bigger problems than Benard's down season, the Giants had the best record in baseball. Seems like that could be the Marvin Benard Theorem: If (player) is the biggest problem on your team, you are watching one hell of a team.

Benard played with the Giants for part of nine seasons, stole 105 bases (caught 43 times), hit 54 dingers (including one off Greg Maddux, six to lead a game off, and a walk-off against the Dodgers), and finished with a career .343 OBP (97 OPS+), while playing a deceptively competent center field. He's on the Giants' Wall of Fame, so he's probably not underrated at this point. He's rated.

Mostly, though, I just love that picture. It took all 4'11" to get to that ball, and the photographer nailed the shot. It makes me wistful for the 'Stick in that weird, I-know-we're-in-a-better-place place.

It's February, so it's time to talk about Marvin Benard. Remember Marvin Benard? I do. He was pretty cool. If you want to honor him, you should probably buy this shirt.

You should probably buy that shirt.

*Drafted exactly one pick after the nephew of my baseball coach back when I was an all-star for the Stallions. Seemed important to let you know that connection. It's basically the opening of Magnolia or a David Mitchell book around here.