It might be the same delivery. All I know is that it's spring, so I choose to believe it's awesome.

As learned baseball fans of the Internet, we're trained to laugh at the expected this-year-will-be-different spring stories. Best shape of his life. Learned a new pitch. Reworked his swing. I mean, do you remember this?

They'll often trek up a road from Zito's house into the hills and stand on opposite ends of a canyon. So it's obvious what happens if one of their throws falls short or somebody can't hold onto a toss. "The ball's gone," Wilson said Thursday during a visit to AT&T Park. "We lost about six balls one day."

So you're forgiven for rolling your eyes a bit at news that Tim Lincecum has reunited with the dad-scientist who built him and has cleaned up his mechanics substantially. It feels like one of those stories. The reason Lincecum is so fit is because he was throwing his new pitch across a canyon to an instructor helping him rework his swing. Something like that.

We have a brief video from Alex Pavlovic, though, so we can compare the new Lincecum to last year's version. What's different?

Before moving on, I should point out that while I rely greatly on the beat writers throughout the year, there is no time of year that makes me feel more helpless than spring training. There are no games to watch, no rumors to gab about, nothing to study. The only things we have are the eyes and tweeter-thumbs of the beat writers. For that, I thank them.

Okay, it's hard to find a perfectly comparable angle, but I did my best with these two GIFs. The first is from last spring against the White Sox. The second is from the Pavlovine.

What can we learn? Ha ha, suckers, I don't know. Not only am I repackaging the hard work of actual reporters, but I'm incapable of doing actual scouting. What are you even doing here?

Okay, but maybe you can see some small differences. Help me out, here. 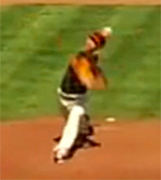 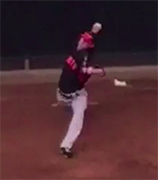 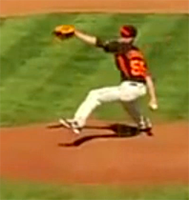 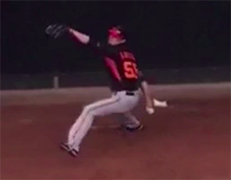 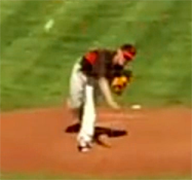 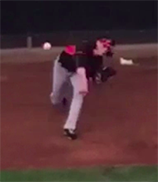 What did I expect? Lincecum coming back and winding up for 12 seconds like Bugs Bunny against the Gashouse Gorillas? Mechanical tweaks usually wouldn't be easy to spot, especially if the video isn't exactly HD.

Is it fair to dissect one pitch out of dozens and compare it to a single pitch from a year ago? No. But it's all we have. We've been told of a cleaner delivery, and here's the blurry Sasquatch of pitching motion. You can study it or ignore it. I'm going to study it because I'm sick. It's the closest we've come to baseball since Salvador Perez popped up.

Here's what Lincecum said on Thursday:

"[Chris] knows my mechanics even better than me," Lincecum said. "They've been out of whack for a while now. I think repetition is the big thing for me. Going out there and continuing to do the right mechanics and knowing why they're doing it is another big thing for me. Growing up with my dad, we talked about how it was more that I listened to what he said as opposed to knowing what he meant, and I think this year I got a bigger understanding of my mechanics and why my body needs to be in certain positions."

So what we're looking for isn't difference, but repetition. I keep looking for an easier motion or better balance. I'm not the only one.

Lincecum has thrown twice in 'pen and Righetti reports delivery is better, less effort, more balance. Bochy eager to get him an appearance.

Me, Rags, Baggs ... Boz Scaggs ... we're all looking for that je ne sais tim. Maybe it's as simple as doing the right thing over and over again. Maybe his dad will help him find it.

And that bit up there about the silly spring stories? Oh, do let us have them. There's no extra thrill that comes from pooh-poohing them. It's the time for unabashed optimism. Here's Lincecum from 366 days ago talking about his first spring session ... and winning the 2014 World Series.

I don't not believe. As long as it's spring, Lincecum's delivery looks different -- and glorious -- to me.