Don't be fooled by their underdog status and cuddly exterior. There's something dark lurking underneath the Pirates.

Share All sharing options for: 2014 MLB Playoffs: Learning to hate the Pittsburgh Pirates

San Francisco was given a team with Willie Mays."Here, take this team with the greatest player on the planet," the universe said.

Yet with all that talent, the Giants couldn't win a World Series.

Age destroyed everything, which age tends to do. Mays started to disintegrate. Marichal slowed. McCovey's knees kept him off the field half the time. And there was that damned AstroTurf smothering everything, a daily reminder that everything was awful and there was no hope. In the offseason between 1971 and 1972, the Giants were merrily sailing along, expecting to contend just like they always did, and they cartoonishly went over a surprise waterfall.

In 1970, the Giants installed AstroTurf at Candlestick Park. That decade was the worst in franchise history. That was not a coincidence.

Assistant: Sir, the ballpark is hideous and freezing. People aren't coming to the games anymore.

"It is very sad. The (Bay Area) is just not large enough for two big league teams. There would have been no problem if the American League (Oakland A's) had not moved in."

The Giants' last chance was '71. That was their last chance to spin their gaggle of Hall of Famers into championship gold. They couldn't do it, and all the Giants could do for the next 39 years was sit on the curb and continue to wonder why McCovey couldn't hit the ball two feet higher.

You know who ruined it all?

Clemente already had a World Series victory. Stargell was going to get another one. Yet they both got grabby with another championship in 1971, ruining the chance for McCovey, Marichal et al to get just one. The Pirates almost singlehandedly forced the Giants to move. Well, the Pirates and the cruel march of age. And probably the AstroTurf. And market conditions. And that disaster of a ballpark. But focus on the Pirates. The Giants wouldn't make the playoffs for another 16 years, and the easily identifiable demarcation line between the classic San Francisco Giants era and the lousy AstroTurf '70s was the 1971 NLCS.

The Pirates, man. Now you're getting fired up.

In exchange for this slight against the Giants and the doomed Hall of Famers, the baseball gods forced the Pirates to help the Giants out at every opportunity for a decade or two. I've catalogued this before, but it's worth bringing up again because the Pirates are on our mind. A partial list of everything the Pirates have done for the Giants:

Today the Pirates selected LHP Jonathan Sanchez to the Major League roster and have designated RHP Hunter Strickland for assignment.

Does all that make up for '71? Probably. But never forget what the Pirates ruined. The bittersweet '60s turned into the morbid '70s, and the Pirates kicked the Giants off the cliff.

There. Do you hate the Pirates now? Because you should.

I can't hate the Pirates. I just hope that the '71 NLCS and the legacy of Pirates gifts in recent years cancel each other out, and we get to watch a clean, well-played baseball game. May the best team ... 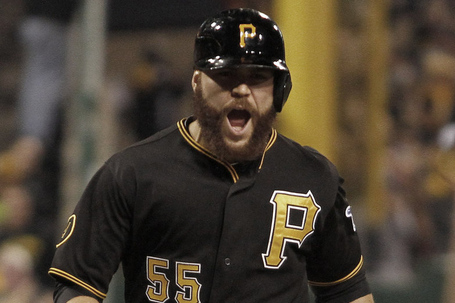 SCREW YOU, PIRATES. HOW DARE YOU.

There. That works. Russell Martin is on the Pirates, everyone. I don't even remember why we hate him so much, other than him being on the Dodgers, but look at that guy. Do you want him to win? You do not. Now you hate the Pirates.

Bad luck, Pirates. May the best baseball team win, unless that's you.