A complete and unabridged history of the Royals and Giants

Jose Guillen! Keiichi Yabu! Why, this post has everything.

Share All sharing options for: A complete and unabridged history of the Royals and Giants

I stopped doing the series previews before every series because of the unbalanced schedule. There are only so many times you want to read about the Padres, and you used those up by 2001.

To that end, let's explore everything the Royals have ever had to do with the Giants.

The Giants have never won a series against the Kansas City Royals.

I'm sorry, that bears repeating: The Giants have never won a series against the Kansas City Royals. In 2003, the Giants won 100 games. They still lost a series to the Royals, who were terrible. I actually didn't look that last bit up. It was an educated guess. (Edit: oh, sure, the one year they were over .500.) The Royals before last year were always awful. They lost 106 games in 2005. The Giants still couldn't beat them.

The Royals are 6-3 against the Giants since the start of interleague play. They've outscored the Giants 54-45. The last game they played was a 11-10 Royals victory that featured four errors, a horrible Tim Lincecum start, and Jose Castillo taking over at shortstop for Emmanuel Burriss. It was probably the worst game in the history of baseball, other than the Keiichi Yabu/Yasuhiko Yabuta showdown that riveted two different nations.

The Royals are the 1997 Expos, but you don't notice because this happens only every three years. They scare me.

Oh, man. The Royals and Giants have a great trade history.

In 1970, the Royals traded young catcher Fran Healy to the Giants, where he was a solid backup. In '73, the Royals decided they absolutely needed Healy back, and they gave up a young weirdo named Greg Minton for him.

This is Greg Minton: 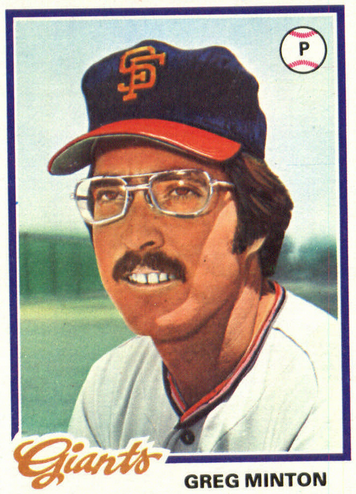 Minton became one of the longest-tenured relievers in Giants history, and one of the best. He saved 30 games in 1982, making the All-Star Game and finishing sixth in the Cy Young voting.

In 1981, the Giants traded Jerry Martin for Bill Laskey, who was the guy who gave me a baseball at every game I attended in 1982. It's quite possible that you're not reading this if not for Laskey, so you can praise or blame him as you see fit. Laskey was also a 4-win pitcher back in '82, so there certainly would have been a McCovey Chronicles post on the Commodore 64 about the Royals helping the Giants out in that near-magical season.

In 1982, the Giants traded Vida Blue for Atlee Hammaker, who became one of the better young pitchers in baseball before his arm gave out. Blue is now a commentator on CSN Bay Area. Hammaker is the father-in-law of Yan Gomes. At this point, I'm just emptying the ashtray of my brain because I'm still thinking about that Minton card.

The Giants got Ramon Martinez from the Royals in 1996, and he became a part of one of the greatest benches in San Francisco history.

Finally, in each of the Giants' championship seasons, the Royals sent over a player who was roided to the gills and eventually broke the Giants' hearts. Jose Guillen wasn't good enough for the 2010 Royals, but for some reason the Giants thought he would help, as if there were a secret "Count how many Jose Guillens" tiebreaker for home-field advantage in the playoffs.

The Royals and Giants should trade more often. It's usually quite rad when they do.

Here's who the Royals picked in three straight drafts:

So if you know a Royals executive, send him or her an edible fruit basket. Those things are expensive. They'll know you mean it.

The Royals inspired two of my personal favorite posts on this site. They were quickly written and forgot about at the time, but I keep going back to them with the benefit of hindsight.

The first one came in March, 2012, when I was I was grasping at straws of optimism.

But looking at the '85 Royals page again made me feel better all of a sudden. I became fascinated with the roster, the performances, and the end result. That was a World Series-winning team that had …

And you already see where I'm going. The 1985 Royals were what we're hoping the 2012 Giants will be in our best-case scenario/fantasy/slash-fic. There are differences, of course. Pablo Sandoval probably isn't going to have an OPS+ of 178, and the Giants won't have two players combine for 80 stolen bases, but it's an eerily similar comp.

Why would a normal person even think about the 1985 Royals in 2012? There is no reason. Yet that post exists. Then, when the Giants actually made the playoffs, only to go down to the Cardinals 3-1, I wrote a follow-up post:

... before the analogy completely crumbles to dust, though, I want to point out three things:

The first is the '85 Royals are the only team in major-league history to come back twice from a 3-1 deficit in the same postseason. They were down 3-1 to the Blue Jays in the ALCS, but they came back. Pretend that's the equivalent to the Giants coming back against the Reds. Heck, Toronto even reminds me of Cincinnati except for the everything.

The second thing is that in the World Series, the Royals came back from a 3-1 deficit against the Cardinals.

The 1985 Royals were our spirit animal, guiding us through the Matt Holliday-related misery, and showing us the wonder of baseball.

The Royals are pretty great when it comes to the Giants, everyone. Now if the Giants could just win a danged series against them, that'd be just dandy.