The Giants scored a run they didn't deserve. They made up for it by refusing to score for the rest of the game.

And then, with Angel Pagan back, the Giants lost.

Or maybe he's just one player on a team that has several easily identifiable flaws, and he was never going to help as much as I was hoping.

No, no. It's baseball that was wrong. This game was a rounding error, and the Giants will start a six-game winning streak now.

I had a baby screaming at me -- a pissed off, defiant scream -- for at least an hour of that game. I'm unshowered, partially hungover, and I didn't have enough to eat for lunch. So I'm not in a good mood, and that game soured it even more. Please take that into account as you try to parse the following grumpiness, and also note that I'm still aware that a) the Giants are still in line for a playoff spot, and b) sports don't really matter.

Maybe I'll try some good management techniques and make sure every criticism is followed by a happy thought. I can do that. I can try to do that.

Unpleasant criticism
Jake Peavy is apparently Ryan Vogelsong when Vogelsong's mechanics are screwy. That's not to say that Peavy's mechanics are screwy, just that the results are the same. There's an ability to be fine with command about 90 percent of the time, and there are appropriate punishments waiting for the other 10 percent. There's a grind grind grind that comes with a veteran pitcher, one who wishes he could to back in time and leave his younger self passed out in an ice-filled bathtub with a note reading "I HAVE STOLEN YOUR FASTBALL. SEEK MEDICAL ATTENTION." That grind grind grind is mostly unwatchable when it doesn't work.

Happy thought
I forgot Travis Ishikawa was on the roster until he was announced as a pinch-hitter. I actually forgot he was in the organization at all. When they called his name, everything rushed back, and I remembered that he was up, which made me remember that he was a Good Giant in 2010.

Good Giant. Like that the guy is getting a major league salary and some per diem, even if I'm still not sure why he's up instead of Adam Duvall.

Unpleasant criticism
Michael Morse, representing the tying run, struck out on a hanging breaking ball in the eighth inning. This is because he probably isn't good at hitting baseballs anymore.

It's not fair to single out one of the only batters to reach twice as if he was what was wrong with the game. But it's a good time to point out that the Michael Morse confident-o-meter has a moldy Peep where the 9-volt battery should be. The Giants couldn't have ordered a better pitch from a catalog in that situation, a hanger at the top of the zone. 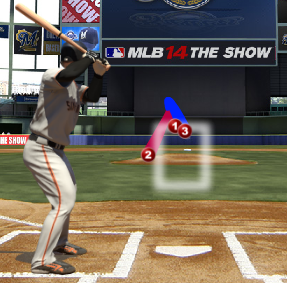 Oh, that should have been clobbered. It came after a pair of 97-mph fastballs that Morse couldn't catch up to, though, so waving through a breaking ball (that he might not have even known the pitcher had) isn't a crime. Except the reason he was in the 0-2 situation was that he couldn't catch up to the fastballs in the first place, including the one at the top of the zone. He can't look for the breaking ball because he had to cheat on the fastball.

Again, 97. We're not talking about Francisco Rodriguez now; we're talking about a pitcher who is more like Francisco Rodriguez then. Being hard on any player for a single at-bat is generally silly, considering the odds are usually against every non-Bonds in the sport. After watching Morse flumber around for two months, though, that hanging curve was painful, painful, to watch.

Happy thought
The bullpen was scoreless again. I remember the fait accompli of Chad Qualls back when Sergio Romo was awful, when it was clear the Giants were going to trade for a nondescript reliever before the deadline just to bring in a fresh arm. Instead, the Giants have a solid-to-excellent bullpen, and that's even with the pitchers who have been struggling a bit lately, like Jean Machi and Juan Gutierrez.

Grumbling about giving up a little for Peavy is fine, but imagine if the Giants had decimated the farm for a reliever, like the Angels did for Huston Street, and the reliever proceeded to stink. Now those would be hard times. Instead of just the annoying times. Which we're living in now. At least in those annoying times, the bullpen is solid, and the Giants didn't have to make a silly deal to get there.

Unpleasant criticism
Boy oh boy oh boy oh boy, has Brandon Crawford stopped hitting. We've been hard on players like Tim Lincecum for being erratic teases, but Crawford might be the most erratic tease of them all. For two years in a row, he's had Giants fans thinking the lineup was eight players deep, and that instead of a no-bat/all-glove guy, he was going to hit just enough to make an All-Star Game or three. Since June 25, though, he's hit .174/.283/.229. Those numbers still seem too high to me.

More importantly: Crawford's career OPS is .665, and his 2014 OPS is .713. This is probably as good as he gets, and there's a chance for even more regression before the end of the season. Every time we dream big about a power-hittin', on-base-gettin' shortstop with a fantastic glove, he turns into a passable hitter with a fantastic glove, and nothing more. That's a still a great player to have, of course, but the dreams made everything worse.

Thanks a lot, dreams. Let us watch our post-Bocock shortstops in peace.