A history of Giants Player, Pitcher, and Rookie of the Month winners

In which we remember that Barry Bonds was ridiculous, and that Randy Winn was once Barry Bonds.

Share All sharing options for: A history of Giants Player, Pitcher, and Rookie of the Month winners

I have a brain filled with ocean, and I'm not sure what's going on in the baseball world. All I know is that for the fifth straight time in the last decade, the Giants had a winning record when I took a few days off. This includes 2008, when the Giants went on a 6-2 stretch despite winning six games all season, so you know it's a serious gift I have. A serious gift you should support with money. The only reason I've never been to Paris is because it's too expensive, people.

Regardless, I need a topic today that doesn't need to be tied to "current events" because I have a lot of catching up to do. Luckily, Baseball-Reference.com gave me an out, as they recently added entries for Player, Pitcher, and Rookie of the Month Awards. Let's take the time to look for all the Giants to win the award.

Rookies of the Month

WHAT DOES THAT MEAN? Really, this was the inspiration of the post, so you can feel free to ignore the rest of the words after this. The Giants have had a lot of rookies over the last decade-plus, but only Feliz and Posey played better than their rookie peers for a month. Note that the award has only been given out since 2001. Still ...

Pitchers of the Month

A list of pitchers with as many Pitcher of the Month Awards as Tim Lincecum and Matt Cain combined: Bill Swift, Noah Lowry, Todd Wellemeyer, Shawn Chacon, Chris Nabholz

A list of pitchers with as many Pitcher of the Month Awards as Tim Lincecum, Madison Bumgarner, and Matt Cain combined: Russ Ortiz, Jeff Fassero, Danny Darwin, Jair Jurrjens

That's all useless trivia, nothing more. But when it comes to short bursts of selective-endpoint excellence, the Giants haven't been as good as you might expect. (The award started in 1975, by the way.)

The most surprising one to me was Hershiser, mostly because I was following the Giants every day by that point, and I don't remember him as being anything other than unremarkable and gross in a Giants uniform. For five starts in May, though, he was a revelation. After that, he went back to being in Revelations.

Old friends/current friends note: Dick Tidrow was Mr. July, 1979. This is Dick Tidrow around that time: 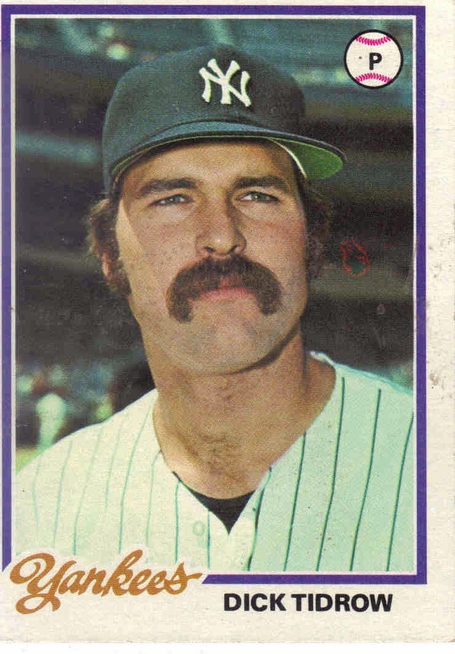 Players of the Month

I didn't realize this stupid award went back to 1958 before starting this post, but it was still interesting. 1958 is the same year that Major League Baseball started in San Francisco. Probably a coincidence, but it doesn't have to be. Quick notes:

You didn't ask for that, but you just got it. When Bumgarner won Pitcher of the Month this year, I didn't put a post up about it because I didn't figure it was a big deal. I regret that now. It's a touch rarer than I thought.