The Giants take their best shot late in the game but come up short.

Giants came into Milwaukee knowing they had a tough series ahead of them. Game 1 wound up being a close, tense affair that they just couldn't come out the other side of victoriously. I'll take a loss like this over a blowout any day, though, even if the Giants can't afford to lose too many more games (Seriously. Like, maybe 18-20 more, tops); and this feels like a more important series than usual what with the Dodgers' schedule toughening up in the weeks ahead and the Giants coming off of winning 3 of 4 in New York. They want to be able to beat the good teams and they need to be able to keep it close with the division leader and hopefully make a move to reclaim the top spot, but Jimmy Nelson managed to keep them in check for the most part and in the end it was the Giants' bullpen that betrayed them.

Of course, it has been the bullpen that has given them any semblance of competing in the NL West. Coming into tonight, it hadn't been scored on in 22.2 innings. They had pitched only 5 innings total out of 36 in 4 games at Citi Field and in only 2 of the previous 5 days. Of course, what wasn't factored in here was that when Jean Machi came in to pitch the seventh he'd have to face former Diamondback Gerardo Parra.

Parra came over at the trade deadline. It was a nice, solid move for the Brewers. It was a terrible move from the Giants' perspective, at least for this one game. This is the power of divisional rivalries. Their trades can have ripple effects and we can wind up being mad at them for entirely new reasons. The Diamondbacks are a steerage class organization but now they're sending their grit to other teams and those same players are jamming up my team's business. That's *really* not cool.

And of course that's his first hit as a Brewer. Because that's what division rivals do. They wait to pounce. They wait until the time is right and then they make it hurt. Really hurt. (I'm being dramatic for effect.) Previously, Parra was 13-for-43 with 1 HR and an .844 OPS against the Giants. He was 0-for-3 against Machi heading into that matchup, but a left-handed hitter against a right-handed pitcher who hangs a forkball has a predictable outcome.

That was no-doubter off Parra's bat. Simply crushed to right center field. I'd tip my cap to him but he's probably been brainwashed by his previous employer to believe that cap tipping is a communist code gesture.

So, instead, I'm going to tip my cap (after turning the lights down low and lighting some candles) to the *other* impressive thing to happen in the bottom of the seventh inning:

Keep doing that, Brandon Crawford, and you just might make a name for yourself.

Tim Lincecum had a familiar start at this point of his career: crushed mercilessly when he left a pitch up, able to get out big league hitters when he kept the ball down. Now, obviously, that is applicable to virtually all major league pitchers, but as we've come to learn, Lincecum has absolutely no margin for error. He might not be able to get away with a high fastball against even Joaquin Arias.

It was his best start in nearly two and a half weeks, and unlike his previous two disastrous starts, this was against a good team. He looked good against them. His season has been a tad bit up and down but for the most part, he's pitched, essentially, well enough We're in August and we're not wanting to take whatever Fresno regurgitates to replace him in the rotation. You know you were googling "what does regurgitation taste like?" before the season began.

In the top of the 8th, Bruce Bochy had Buster Posey and Michael Morse on the bench. Brandon Belt, sadly, popped out to lead off. But Pablo Sandoval walked. Props to Panda for having patience and smart move by the Brewers for pitching him carefully. Bochy subbed in Morse prompting Brewers' manager Ron Roenicke to pull lefty Will Smith and put in power righty Jeremy Jeffress, ostensibly to blow it by free swinger Michael Morse. Jeffress did indeed get a couple of cheap swings off the big guy, but he forgot to bring his control with him from the bullpen and walked Morse. And then (grits teeth) Gerardo Parra (inhales deeply, holds it, exhales) makes a sliding catch in foul territory to retire Brandon Crawford. So, two outs, two on and Juan Perez comes up. Bochy puts his last bullet in the chamber: Buster Posey. Sometimes people deserve to have their faith rewarded...

... and sometimes... sometimes the face of the franchise gives you indigestion.

Wait, I'm getting off track here... Blanco and Perez were pulled from the game, meaning CF and LF now needed to be filled. Posey went to first base, Morse went to his traditional position (guffaw) in left, Pence moved over to center for the first time in 7 years, and so that left only one man for the job in right: 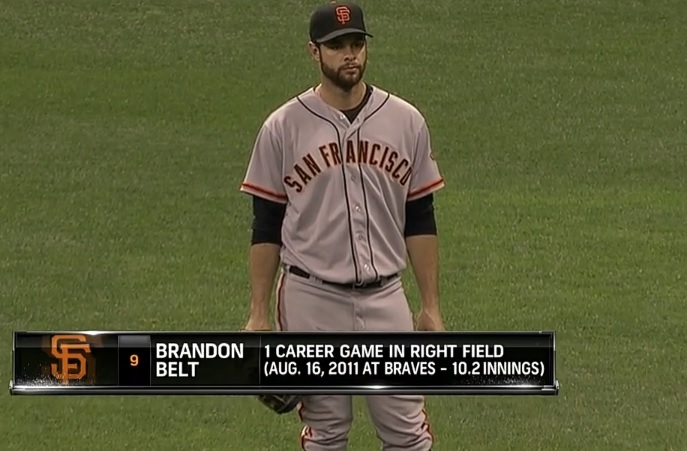 Not even close to Pedro Feliz at catcher, of course, but it's easy to project discomfort onto an image of Brandon Belt.