Matt Cain to undergo surgery and will miss the rest of the season.

Bone chips killed the NL All-Star, but don't worry, he's only mostly dead. He'll be back.

Share All sharing options for: Matt Cain to undergo surgery and will miss the rest of the season.

This is the moment we've been dreading ever since we first learned of the loose bodies, flotsam and jetsam, bone chips that lived inside the pitching arm of Matthew Thomas Cain. Of course, the full fear was that we'd lose him to something like Tommy John (the surgery, not the flesh-devouring ghost), so, here's to expecting the worst and be rewarded with slightly less bad news!

Matt Cain's season is officially over. Bone chips coming out next Monday.

Surgery will be in SF, Cain will be out about three months but should be fine by spring training.

Matt Cain is the first Giant since Edgar Renteria to be hobbled by the ruffled doom of bone chips, but this is the first time I can recall where a player was de-Dorito'd in season. We might hem and haw about waiting so long to deal with this, but recall that Matt Cain has been horsing around with these things for a few years now, and he even won a couple of World Series with them. Boy, I'm sure they'll be mighty sore to get kicked out of the house after everything they've done for him,

Then again, maybe he's been pitching through consistent pain. I think consistent pain is way worse than occasional pain because it is unceasing. Why would we want people to play through continuous pain for our amusement? Oh, right. People still pay money to go to animal circuses. But even though he's a horse, he's not in a circus!

All this to say, get well soon, Matt Cain. You've done your bit for king and country, though. Don't play through pain, don't rush your rehab, don't try to be a tough guy. 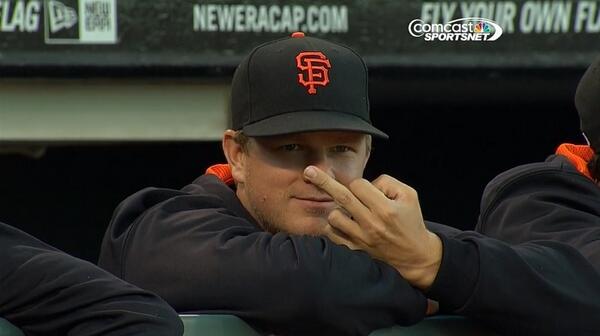 Geez, man. I was trying to be supportive. Okay, fine. Be that way. Do whatever you want.

Listen, we know the score. Playing through pain is what these guys do. Coming back too fast is commonplace. We'll just have to trust that the Giants know what they're doing in terms of his rehab and that they and the player set reasonable goals. There's no real cause for concern, of course -- everyone thinks this is a standard surgery and he'll be fine by Spring Training -- but you never know with these things.

It's possible Matt Cain comes back from this as good as ever. It's possible he comes back and is fine, but somehow still on the decline. No matter the case, I would rather he finish out his contract with the Giants (through 2017 with an option for '18) healthy and not on the disabled list. Pitchers, though, pitchers, sometimes, they just go.

But why end on a down note? Matt Cain won't be playing for our favorite team again this season and that's a drag, but he'll be back next season, which is great, and there's every chance he'll be as good or better than he's been the past two seasons. That's also a net gain. Brian Sabean planned accordingly and acquired Jake Peavy to fill in the Cain-sized hole in the rotation. That's good, too. So, everything's fine despite one of the coolest Giants being lost for the rest of the season. Oh well. Maybe the Giants Twitter account will tweet out a picture of the removed bone chips/loose bodies. I can only hope. Been wondering what those suckers look like ever since Edgar Renteria had them.