Giants continue their nice run on the road with timely hitting, timely Metsing, and solid pitching.

First: that picture of Buster Posey is marvelous. I don't care if the headline features Pablo. That picture features pure energy.

We might not see Pablo Sandoval in a Giants uniform next season, but if we're to see him in one come October, then for the next couple of months he'll need to approximate his performance at the plate today. He was responsible for 3 of the 4 Giants runs and looked very much like the Pablo Sandoval we've come to expect: a tough guy to get out because he swings at everything and a guy with a knack for big hits.

This morning, ESPN announced they had selected Pablo as their defensive player of the month for July. He didn't have that big defensive play that we've also come to expect from him, but he also didn't make any mistakes with the glove. Jenrry Mejia threw too many sliders and finally hung one that allowed Pablo to hit the go-ahead/game-winning run and the Giants clinched their first series win in a couple of weeks.

Pablo Sandoval's price in free agency will continue to climb if he keeps this up, of course, but the better he does, the better the Giants will do, and it's the team's performance which matters most. Yes, it'd be nice if Pablo Sandoval signed the same contract Hunter Pence signed last September, but that is probably not going to happen. The myth of the contract year has already been busted. Pablo Sandoval is out of hamate bones. He might simply be preparing to go on a hot streak. In which case, the Giants are saved!

Yeah, I'm using a one-game sample to make that case, but I'm doing so less than 24 hours after saying the Giants really need him to get going and carry the offense. So, he listened to me. Delusions aside, a game like today's is important for the simple truth that the Giants really, really need him. Pablo Sandoval's potential at the plate is basically Posey's coverage and Pence's power. He doesn't walk a ton but he doesn't strike out a ton. I always thought we'd get 30 home runs out of him some season, but that looks like it'll never happen. Instead, he'll have the power potential of a 30 home run guy with the maddening skill of swinging at and hitting everything and anything thrown his way.

Very glad to see Pablo have a strong game at the plate, especially when it follows up big games from Posey and Pence. Belt looks like he's pretty comfortable and might just pick up where he left off in terms of his power stroke. Pagan might be back soon. Suddenly, the Giants do not look quite so woeful.

It helps that they played the Mets, of course. Dillon Gee did not look like he ever had command today, but that didn't stop him from holding the Giants back. They had several chances to bust out big innings, but whether it was the wrong batter at the right time or the right pitch/wrong swing at the right time/wrong time, they just couldn't break through. There were definitely some frustrations peppered throughout the contest and, so, watching the Mets collide in the outfield and throw a wild pitch that led to a run certainly helped ease the stress.

Tim Hudson's first batter was Curtis Granderson and this was the strike zone: 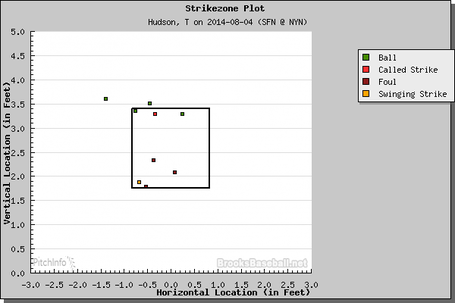 Good grief was that maddening. Granderson and Murphy really worked Tim Hudson today, and while I don't think the first plate appearance of the day (and his final face-off against Granderson) rattled him, he definitely never seemed to settle in, and the elevated pitch counts early on certainly contributed to his early exit. But the Mets should get a little bit of credit for that. They really worked the count. Supporting evidence: Sergio Romo (remember him?) had to throw 26 pitches in the 8th inning. Hudson and Romo are not direct strike throwers and the Mets took advantage of that, fouling off close ones and laying off the ones designed to get a swing out of the zone.

The Giants have won 3 of 4 to start off a 10-game road trip. They are 32-21 for the season away from AT&T Park. Before this trip began, 7-5 in their previous 12 road games. In other words, they have been a lot better on the road than at home this season. I have no idea why that is, but I think the only logical conclusion is that they hate playing in San Francisco in front of a packed house and prefer the quiet confines of empty stadiums against not-great teams. Yes, that is the only logical conclusion. However, I propose that the Giants should win games both on the road *and at home* in order to contend for a playoff spot. I will merely propose and not offer any suggestions on how to go about accomplishing this, however.

Also, I caught this tweet shortly after the game ended: