Encountering the most annoying Giants commercials of the past 3 years

I wouldn't say I missed them, Bob.

Share All sharing options for: Encountering the most annoying Giants commercials of the past 3 years

I'm a lifelong Giants fan and a Northern California native, but in 2010 I moved to Los Angeles. Who knew that all I had to do to get the Giants to win a World Series was move to Southern California? At any rate, I've been watching Giants games exclusively on MLB.tv, MLB Network, FOX or whatever station used to actually televise Dodgers games in Los Angeles. As a result, I've been missing out on the (sometimes) terribly annoying Giants team commercials for the past four years, outside of the occasional coming-back-from-an-ad-break "-- driving a truck on the upper deck? NO WAY."

(And for the record, there's one ad that I dearly miss and is for some reason not on YouTube: the one where two Giants -- maybe Pablo and Uribe? -- are running through some "signs" and one of them taps and jiggles his head and the other one yells "FREE BOBBAHEY." Miss you forever, FREE BOBBAHEY.)

In scouring through YouTube for Giants-related things, I came across this ad that I had never seen before, but that Grant assured me had been irritating fans for ages:

That is ABYSMAL. That is awful. That's a commercial worth reporting to the Hague. I'm sorry you had to suffer through that. You really should have been calling CSN Bay Area and staging protests and whatnot. How in the world was the end of that commercial not Vogelsong sawing that guy into bloody chunks with an actual chainsaw?

But in the interest of solidarity, I wanted to see what else I had been missing out on by not watching these games north of San Luis Obispo.

Buckle up and I apologize in advance if any of these trigger any PTSD from having watched these hundreds of times.

(All GIFs are via the wonderful Carmen Kiew.)

Wait, does Pat Burrell want to find out how sex works instead of the kid? That's what "pinch hitting" would mean in this instance, right? PAT YOU CLEARLY ALREADY KNOW HOW SEX WORKS YOU HAD SEX WITH ME THREE TIMES WHILE I WAS WRITING THIS SENTENCE AND YOU ARE A FORCEFUL BUT COURTEOUS LOVER.

Also the kid just being like YEAH DAD TELL ME ABOUT DOIN' IT AT THE BALLPARK INSTEAD OF THE BREAKFAST NOOK is super, super weird.

This is one that I've been told is among the most annoying, but it seems fairly innocuous upon just one or two viewings. I imagine it just piles up and up and eventually you're like BLEAARRRGGGHHHH. Although the kid going "GYEAMER BYEHBS" is fuuuuuuucking gross. Any time anyone tries to lay some pro-"Gamer Babe" sentiment on you, point them to this grody kid.

Hey, what's got two thumbs and is is creeped out by this kid?

Haha remember April and May, when we all loved that big galoot? That was so long ago. Also, the Giants should be aware by now that the only acceptable person to put in costumes in lieu of a gag in and of itself is Sergio Romo. Full stop.

He doesn't care if it's Metallica Night, you guys. Which is why he's cosplaying as Van Hammer. BECAUSE HE DOESN'T CARE.

But at least we got to see him with his shirt off before he leaves us next year. (LOL just kidding: 3 years/$36 million, but hey, we'll get a bobblehead out of the deal.) 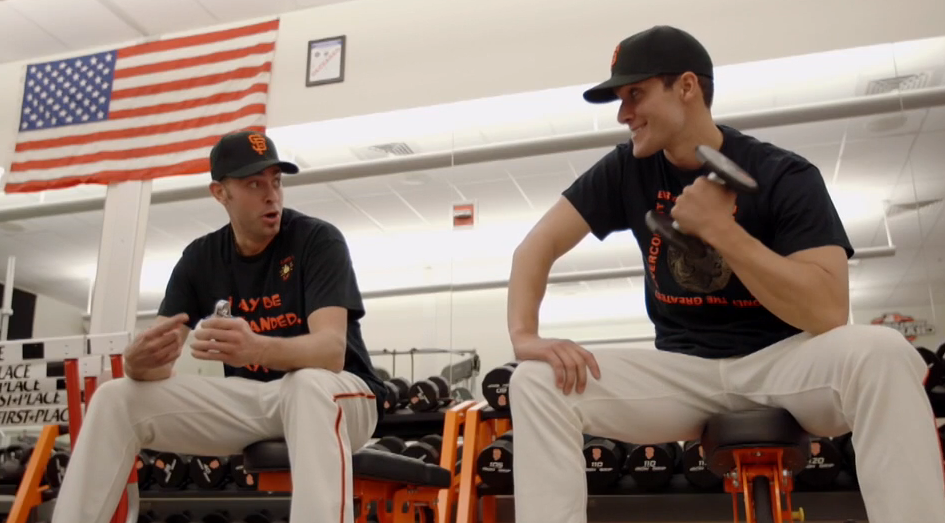 Yes, Jeremy. "Boom." Nice 2.5-pound curls, Night Train. You probably needed like 50 takes for this, so it's good you didn't get winded. And Jesus Christ, Affeldt's shirt says I MAY BE LEFT-HANDED, BUT I'M ALWAYS RIGHT. I didn't know Spencer's Gifts sold shirts without butts or bongs on them, but here we are.

I'm not sorry I missed these, but I am sorry you had to sit through them millions of times. Please take solace in the fact that I intimately feel your pain. I'm glad we could all work through this together. It was cathartic. Now YOU have a friend in the diamond business.