Madison Bumgarner scares you with how good he is.

Share All sharing options for: Madison Bumgarner scares you with how good he is.

On an intellectual level it feels repetitive to continue singing Madison Bumgarner's praises. On a purely emotional level, it is the most rational act imaginable. He turned 25 two days ago. He's already pitched 925 major league innings in all or part of six seasons. He has two World Series rings. He has accomplished so much in such a short time and it looks like he still hasn't reached his ceiling! I mean, look at the way he's mixing in his curveball these days. His fastball velocity sits 92-94 with far more consistency these days. He has found that extra gear where his dominance looks effortless and he shifts into it with far more consistency, too.

Madison Bumgarner pitched a Maddux (a shutout in fewer than 100 pitches), which feels both wrong and fantastic to type. Wrong because Greg Maddux was never wrapped in french vanilla and fantastic because Greg Maddux is one of the greatest pitchers of baseball's modern era. Is Madison Bumgarner one of the greatest pitchers of the modern era? We might be answering yes 25 years from now, but today we'll simply say that he is among the best currently slinging it right now.

Yes, a lot of this does feel like a recap of what we already know, but when you sit back and actually think about it, you can only feel impressed. He doesn't have the flair of Tim Lincecum's dominant years, he doesn't have the thrilling promise Matt Cain brought with him to the majors ("The Giants have a potentially dominant starting pitcher for the first time since I've been alive"), and he doesn't have Barry Zito's marketing campaign. He is his own deal, unique among Giants and baseball. For me, those points never leave me when I sit back and consider just how good he is. Yes, he has been less than stellar in the past five weeks, but today soared above the stars.

At no point did he look troubled by the Mets' hitters and on several occasions he looked like he cared not for their weaknesses within the strike zone. Buddy Carlyle nearly decapitated Michael Morse in the sixth inning and proceeded to pitch him away the next couple of pitches, perhaps because his command was wonky or perhaps as a courtesy for almost beheading a guy by accident. But Bumgarner knew Eric Young Jr. and Chris Young could not hit and he simply pounded them on the hands with fastball after fastball. And when he didn't get a deserved called third strike on Curtis Granderson, he came back on the next pitch with a big ol' curveball that absolutely froze Granderson to get that strikeout. He had ten in the game, you know.

Madison Bumgarner was a special kind of dominant today. He was the kind of dominant that people with low self-esteem would label as smug. Of course, confident people or simply fans of Madison Bumgarner could see that he was in total command of his abilities today against an opponent he had on the ropes from the second inning on. It was a marvelous performance. I feel like I just ate an exquisite meal. I will now rumple up my napkin, drop it on the fine linen table cloth, push my cushioned chair away from the table and retire to my chambers.

Buster Posey needed a triple for the cycle. He did not get that triple. Instead, he settled for another 4-hit game, the tenth time he's done that in his career (he also has a 5-hit game).

Hunter Pence had a 2-homer day, went 3-for-5 with 4 RBI from the lead-off position. He also had to "endure" the slings and arrows of clever Mets fans who targeted him with taunting signs. 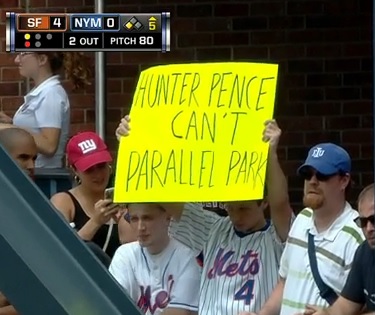 Here's hoping that Mike Murphy has soothing balms and analgesic creams available in the clubhouse to treat such intense burns.

The Giants hit four home runs today (the second time they've done that this season), which is pretty great considering the downward trend they were on the past couple of months. Brandon Belt crushed his home run. If he can come back and be some version of his April, with perhaps some of that pre-2014 plate discipline/walk rate mixed in *and* Pablo Sandoval can go on a hot streak of some kind, the Giants might be poised to make a run. It has been their luck that when the pitching has been up, the offense has been down, and vice versa. 2 wins out of 3 to start off a 10-game road trip are by no means a portent -- they're still playing the Mets -- but the Giants, despite looking dead for a while now, remain in the mix. Hard to believe in one respect, but not beyond the realm of belief in many others. They have the bats, they have some arms, and occasionally, as we saw today, they have an indomitable ace.