There were jokes during the delay. It doesn't seem so funny anymore.

Share All sharing options for: Giants lose shortened game after 15 minutes of rain, 4½ hours of delay

The Giants lost a baseball game in a pennant race because the Cubs don't have a mechanical tarp robot named Minxie. The Giants lost because there was no Minxie to come out and comically flail its robot arms as it spun around in circles, wrapping itself in a rain tarp, smoke leaking from its robot ears.

There were about 15 minutes of rain. A tarp could have kept the infield in a playable condition. If the Cubs had a mechanical tarp robot, see, the Giants and Cubs could have resumed this very important game on Wednesday. Here's the rule that prevented them: 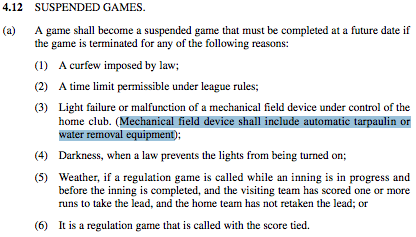 Alas, there was no malfunction of a mechanical tarpaulin. There were just a bunch of soggy dillweeds who couldn't apply a tarp manually. From valued McC user mymclife:

Look at the idiot with the top-left part of the non-mechanical tarpaulin:

What is he dooooooooooing? What are you no no no no, stop stop, no no no ...

"Chet, what in the absolute hell are you doing?"

If you go by the rules, Major League Baseball had no choice. Says right there. Mechanical tarpaulins. There is nothing in there about incompetence. There is nothing in there about some dude at the top of the tarp running with his corner to the middle of the infield because he's on mescaline and the raindrops feel like an endless stream of sky shurikens lacerating his flesh. You look for it. It's not there.

So the Giants lost.

They also lost because Ryan Vogelsong gave up a 600-foot home run after walking an unwalkable player.

Would have loved to see those last four innings, though. The Cubs got to win last year on a miserable Brandon Belt error, even though the Giants had the power of #socialmedia behind them. They got to win in the ninth inning the day after that, and in the seventh inning in the series finale. The Giants got five innings on Tuesday. Because Chet is an idiot.

(Note: I don't actually know if the top-corner person is to blame. I don't run in groundie circles, and I don't know the groundie customs. He might have been executing the reverse denbert, and someone else let him down. But I'm blaming him until further notice.)

Rules are rules. Look at 'em. All written up, officialized in a PDF. But within these rules, what's stopping someone from intentionally screwing up a tarp deployment? There was 10 ... 15 minutes of rain. I can literally buy a watch that displays animated weather patterns, which is some post-Dick Tracy shit, so they had to know a cell was coming. The only thing that wouldn't lead to an automatic Cubs win was a sloppy tarp depl ... ooops.

That's not what happened. Chet can't play Stratego without trapping his 1s behind his bombs, so it's not like he was five steps ahead, intentionally screwing up. But what in the existing rule is preventing that from happening? Nothing. There's a distinction between tomfoolery and mechanical tarpaulins.

There's a distinction because a manager like Billy Martin would have been out there at every opportunity, arguing the efficacy of a mostly functional grounds crew. That guy, man. Still needling us from beyond the grave.

Thinking that Buster Posey should have put one in the bleachers and/or fouled off 47 pitches in his last at-bat. We're having a much different conversation right now.

Whatever. I'm putting a curse on you, Cubs.

Shut up. This curse is binding. This win will alter your pick in the 2015 draft, Cubs. You now pick one slot lower. The pick before yours will turn out to be Mike Trout with a robotic exoskeleton. He was first on your board, too, but, aw, raspberries. You will get Nick Punto. Not necessarily the actual Nick Punto, but they hand the title off like Green Lanterns.

In the NLCS, your draft pick will flub two grounders and strike out four times.

Mike Trout with a robotic exoskeleton will win three championships.

One of them will be with the Cardinals.

This is your curse. Wear it. Don't blame me. Blame Chet.

Good job, Chet. Where in the hell were you going?