Tim Hudson is normal again, which means there isn't a single danged Giant having a surprisingly great season.

Finally. We can talk about the Giants being weird.

You knew they were weird, but I'm talking in a very specific way, and Hudson was the last holdout. Hudson was the last player on the Giants who was exceeding our expectations wildly. Now everyone on the team is doing about what we expected, unless they're hurt or doing much, much worse.

Think back to the halcyon days of May, when everything was a wondrous dream. Brandon Crawford was a power hitter. Michael Morse was an MVP candidate. Tim Hudson was physically incapable of walking anyone. Madison Bumgarner looked like a threat to start the All-Star Game, not only appear in one. Every one-run game seemingly went the Giants' way. There were walk-offs and more walk-offs. They were even outperforming their Pythagorean record, just for yuks.

Since then: regression snipers. Look out, they're on the rooftops! Pprrrroownnng. They took down Morse, first. Got him right in the legs, leaving him unable to run. No one noticed for two months. Now his offense and defense are combining for a player who is probably worth it, but nothing close to a star. Ppprroooownnng. Crawford was next, and everything right at the plate was wrong again, just like in the long, long season. No one was spared. The Giants' Pythagorean record evened up, too.

Hudson was the last holdout, and now he's back, roughly, where we should have been expecting him to be. The Giants are without a player who is blowing us away with his performance in the 2014 season.

You might think this is more Eeyore stuff, that this is another way to moan about the Giants. Heck, no. I'm almost pleased. All of the playoff teams have players wildly exceeding expectations. It was Josh Beckett for the Dodgers before he went down, and it's still Scott Van Slyke now. The Brewers are gonna ride the Scooter Gennett train as long as they can, and Tanner Roark has been a revelation for the Nationals. These teams have disappointments, sure, so it's not like their seasons are because of those players. It's just that they can point to them and say "Thank goodness that guy is doing better than we hoped."

The Giants don't have that. They have disappointments (the bench, Sergio Romo, the bench, Matt Cain, the bench), and they've suffered injuries that were predictable (Scutaro), unsurprising (Pagan), and random (Belt). They've gotten a touch less than they were hoping from Buster Posey and Pablo Sandoval, and about exactly what they should have expected from just about everyone else. This is a team you were expecting to make curfew and with a hint of booze on their breath, and they showed up five minutes late with a hint of booze on their breath.

This is an unsurprising, predictable team. They just did it in the weirdest permutation possible.

So I'd gather, as long-suffering and tortured Giants fans who have gone hundreds and hundreds of days without anything substantial for which to cheer, we deserve a Giants player who goes on an insane, freaky, hot streak. 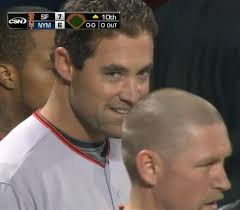 No, no, not that kind of freaky hot str ... well, okay, yeah, kind of like that. A player who starts doing something completely out of the ordinary, which makes us ignore reality and embrace a new reality.

Even if that player doesn't show up, the Giants are still contending. I have no idea how, but they are. After a couple months of poor luck and discouragement, I'm looking forward to some wildly unrealistic hopes. It's been too long.