The Giants won a series at home for the first time since July 13. It was the first time the Giants had won consecutive games at home since June 7-8, which was also the last time we thought the Giants were unambiguously good. If you're looking to set off some firecrackers and invite some friends over, I wouldn't blame you.

The win came within the terms of the post-May curse, as required by law. As in, there were extenuating circumstances (lol Phillies), continuing frustrations (Tim Lincecum), and downer notes (Panik's pinkie partially popped out of place) that can't keep us feeling absolutely elated. There's always a hair in the cheesecake. There's always a long, black hair that doesn't match that of anyone at the table. If you dwell on the hair, you won't enjoy the cheesecake. Just enjoy the cheesecake for a bit. Complain to the manager later.

Man, that hair is grody. I think I saw Brian Wilson in the kitchen, too.

Focus on the good things for at least a segment, though. Michael Morse went another game without making an out, scoring two runs. Every hitter in the middle of a hot stretch looks like a force of nature by definition. That applies to Buster Posey in the second half of 2012 as much as it applies to Eugenio Velez for a three-week stretch in 2009, so it's forever premature to suggest that (hitter) is back. The reason we pay attention to stats is because our eyes are drunken liars.

Danged if Morse doesn't look like the guy from April and May, though.

Focus on the bullpen, which is almost exclusively the reason the Giants' historic collapse still left them in position to contend for a wild card spot. If the bullpen is a chemical fire over the last two months, the Giants aren't where they are today. Which is a sentence that might make you giggle, because where in the heck are the Giants?

In position for a wild card game against the Cardinals, which sounds like a lot of fun (if you're properly medicated). That's because of the bullpen. Other than a blip from Sergio Romo that's mostly fixed, they've far, far, far exceeded expectations. Remember back in January, when the Giants a) had the most expensive bullpen outside of Los Angeles and b) were still projected to be the worst bullpen in baseball?

This team doesn't make sense, either. Unless you figure they're a bad team that's just good enough to beat the Phillies. But focus on the cheesecake. The cheesecake. I think there's an Oreo crust.

There were also annoying things, of course. And by "annoying," I mean that Joe Panik left the game with a dislocated finger, just as he was starting to look comfortable at the plate. For the first month he was up, he was wearing out the Aubrey Huff Memorial 4-3 Route, rolling over every pitch and sending it to the second baseman. Since then, he's been spraying the ball all over, getting a little lucky with balls in play, but mostly looking a lot better. The Giants exercised great restraint at the deadline, not giving up a prospect for a minor upgrade (Emilio Bonifacio) or secret downgrade (Gordon Beckham). Part of that had to do with Panik not looking overmatched.

But he's a second baseman, so he was going to break at some point. Reminder of what's happened to Giants second basemen over the last couple seasons:

And now this. The Giants will have to make do with Matt Duffy and, gulp, Joaquin Arias over the next few days. 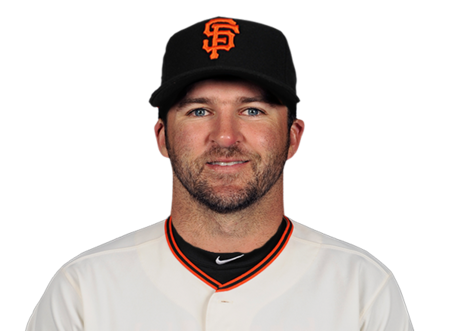 JUST GIVE ME THAT CHANCE, SKIP.

I don't even have the heart to tell him.

For, what, the fourth or fifth time this season, a win has felt like something of a drag because of an in-game injury? There was the Belt game and the Belt game, the Pagan game, and the Cain game before the Cain game. Now there's the Panik game. Hopefully we won't even remember it by next week.

It's been 2⃣ days since my last Peanuts reference. My bad. But being a Brandon Crawford fanboy has been tough over the past month, and it's reminded me of Linus waiting in the perfect non-commercial pumpkin patch for a Great Pumpkin who never shows up.

/he doesn't come through

Well, today was a bag of treats for all. A seeing-eye single and a roped sacrifice fly, which is about as productive as he's been in any game over the last 30 days or so. Morse hitting well again is welcome, but it's also a little confusing, considering that I'm not sure which version is the real Morse. I'm pretty sure we know who the real Crawford is. He's streaky, but rarely a complete drag on the offense. Getting that guy back would be a big deal.

The Giants are 3½ back of the Dodgers. That's almost enough to start believing again. Just forget about how they were 9½ ahead two months ago, and you'll be fine.