Share All sharing options for: Giants shut out, win 7-1 via appellate court ruling

I'm not okay with that.

I am vehemently against home-plate collisions. I was before Buster Posey; I really was after Buster Posey. I've written thousands and thousands of words about home-plate collisions. I've been called a "limp-wristed, dress-wearing, SF girly man writer who knows NOTHING about baseball and who probably would LOVE for the teams to look more like the Village People than ball players" in the hallowed halls of Free Republic because of it. 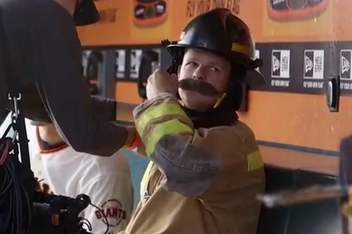 I would rather the Giants lose 10 games next year on replay reviews instead of having them end one catcher's season on a play at the plate.

I'm still not okay with how the Giants won that game.

Here's an important point that some people will overlook in their rage and disgust: It was probably the correct call. Tyler Flowers was picking his nose for the first second of the play, and he rushed to get into position once he realized the play was at home. He stopped in a place that affected the runner's path. Catchers can't do that anymore, and the game is better for it.

Yet I feel unclean, completely gross. The Giants only scored runs because of a technicality, a loophole, a deft legal maneuver. They were going to get shut out, yet they scored seven runs because Joe Panik hit a baseball just horribly enough. I'm all for the new rule -- the "Alex Avila rule", as Henry Schulman reminds us it should be called -- but I'm also in favor of the umpire getting the opportunity to use his discretion. This opens up an Angel Hernandez Wormhole of Stupid, but I'm okay with an umpire looking at the replay to see if the runner really couldn't score because of the catcher's positioning.

That's an impossible distinction to make every time, I'm sure, but there are certainly unambiguous calls to be made. Blanco wouldn't have scored, even if Flowers were positioned correctly. The Giants, who only had two runners on because of a doink from Michael Morse and a hyper-doink from Adam Duvall, got a run because of a rule. Then they got a lot more runs.

I've referenced the Peanuts special Be My Valentine before, in which people feel bad for Charlie Brown and give him a valentine with the intended recipient's name scratched out. 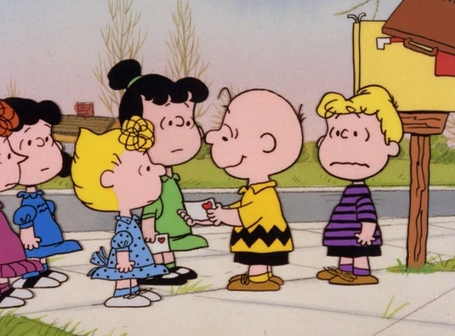 It's a good shorthand for getting something repugnant and insulting that you'll totally overlook because you're desperate. This is like that, except the valentine was taken from another kid -- possibly a sick and lonely kid -- who now doesn't have a valentine. And it doesn't feel good. Nope. Not at all.

I just wish there were some way to feel better about this ...

Ha ha, you are awful, Hawk Harrelson. A living anachronism, a gory scene of legacy and familiarity beating meritocracy to death with a rock.

Seriously, though. Skirts. Kilts. How would baseball change with them replacing the required uniforms? Picture an outfielder in full flight, kilt flapping in the breeze. So elegant. Picture the slides. Picture Pat Burrell standing in the outfield, idly lifting his kilt because he's bored. Picture the kind of kilt a catcher would have to wear, an iron contraption with chainmail underwear.

Still, I wish there were one more way to feel better ...

If the Giants didn't score on at least one Dunn flub in right this series, we would have known the gods rigged the season. Buster Posey got a triple because Dunn plays the outfield like a German exchange student in third-period P.E., yet the Giants couldn't get him home.

Finally, the decision to play Dunn in the field worked for the Giants. Instead of thinking the gods rigged the season, I'm starting to think they hate the DH.

I can't stop laughing at that play. He comes from 500 feet away and calls off his center fielder. It's art.

The Giants won the game because of Jake Peavy just as much as they did on the referendum. He wasn't dominant, but he threw the ball where he wanted to, generally, and he never let the White Sox get comfortable.The Giants are still just 1-3 with him in the rotation, but that's not his fault.

If SFG Productions wants to dabble in the reality show side of things, a free suggestion: Have Bruce Bochy tell both Peavy and Ryan Vogelsong that they'll be pitching on the same day. Put their lockers next to each other before that start. Film them. Maybe set up some pranks, like making it seem that one is turning the other one's radio off.

It would be hard to pull off, but it would be like putting a bee and a spider in the same jar and shaking it. Those dudes are intense. Peavy wanted to throw Adam Duvall into the sea for holding onto this ball:

Peavy is kind of a freak. I'm for it. Just keep him away from Voglesong on Game Day. Everyone will be better off.

This stupid team is tied for the wild card.

Like a game won on a dodgy call, though, I'll take it. If the season ended today, there would be a playoff to see who got into the playoffs to get in the playoffs. That sounds like a lot of fun. I'm for it.