Giants play with your emotions, lose in extra innings

They almost won! Then they didn't. Better to have lost and thought that you had a chance to love someone who hated you rather than never have loved at all.

Share All sharing options for: Giants play with your emotions, lose in extra innings

When the Giants re-signed Tim Lincecum for two years and many monies, one of the common defenses was that Lincecum meant something to the organization and the fans. The idea of him succeeding with another team was repugnant; good, rich teams don't watch their homegrown heroes succeed somewhere else.

There's another, snappier, dumber name for that kind of concept: the brand. Signing Lincecum was good for the brand. Losing him was bad for the brand. The Giants wanted to be seen as a certain type of organization, one that embraced fan favorites and familiar faces -- and one that was scared of using free agency to fill three different holes in the rotation. So Lincecum came back, for better or for worse. To a lesser extent, this applied to Ryan Vogelsong, too.

There's a counterpoint, a dark corollary to that idea. If a brand exists, then there are things that can hurt it. Really screw it up. I don't think letting Lincecum walk would have done it. I don't think trading a popular player would do it. Losing at home, that's what will do it. Over and over again, beyond any reasonable explanation. Losing at home for an extended stretch is the worst thing this franchise can do.

You get tickets, probably paying a lot. You get off work, you drive, sit in traffic, or you squeeze into a crowded form of public transportation. You get to the park and wait in line to spend $50 on food and beer. You sit down. You watch.

And you don't have fun.

Nothing about it makes you want to do it again. Everyone has this experience at the park every so often -- sometimes, the dumb games are just dumb. But the Giants have been piling these dead, dull, boring losses up. One after the other. The home park becomes the electric pellet when the bell rings, and soon you stop grabbing the electric pellet. If the Giants keep this up, they're going to ruin everything. Not just the season. Everything. Future payrolls. The general sports-related excitement of an entire region. The thing-to-do feeling of the last few years. Everything.

A hot month would fix it. But another month-and-a-half of the home losing would make for a long offseason for everyone to contemplate just how much fun it is to watch baseball in San Francisco.

The Giants are just a half-game out of the second wild card spot. They're ... these idiots are ... I can't believe it, either. But before the Royals were humiliating the Giants in front of a new Midwestern audience, they were also reeling. They were supposed to sell, or at least not buy, because the playoffs were so unlikely. This doom might be temporary, and we might all laugh at this someday, just like we can laugh at the doom and gloom we felt after Bronson Arroyo's masterpiece in Game 2.

I, for one, do not have optimism leaking from my pores. This isn't a team screwing up just badly enough to miss the playoffs. This is a team screwing up so badly, you don't want to watch baseball ever again. There are literally 18 teams in baseball -- 18! -- that would love to be a half game out of the playoffs, yet the Giants have figured out a way to make you feel worse than the fans of all of them. The Cubs are giddily embracing Javier Baez. The Padres have the dunno-maybe kind of optimism that a new GM can bring. The Marlins have youth and more youth, and they're still in the race. The ...

Okay, you don't want to be the Rangers. Or the Phillies. The Rangers or the Phillies, and the Diamondbacks are kind of a mess. Oh, yeah, the Rockies, jeez, what a nightmare. Fine, there are a lot of teams you wouldn't want to trade the Giants in for right now. But I don't remember a team getting all of the good stuff out of the way so early in the season, just to leave us with miserable three hours after miserable three hours. It has to wear on the team. It definitely wears on the fans. If it keeps up, it will hurt the brand, and as much as I hate myself for un-ironically using that term, think of "hurting the brand" as a code for "the point when people stop spending money on this shit."

Half-game back, everyone. Have some perspective. Don't be such a mope, and we'll see you tomorrow afternoon.

The Giants are as close to the Dodgers as the Padres are to the Giants.

The 2-2 pitch to Moises Sierra in the 10th inning was a ball, according to the PITCH f/x lasers and Brooks Baseball. 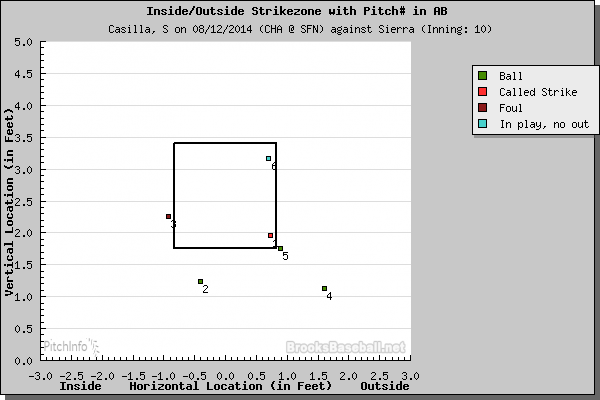 That should make you feel better!

I think the thing that bothers me most about that game is that if you took the two-out hit from Brandon Crawford, and put it in just the right spot in 20 of the losses over the last two months, it would have led to a Giants victory. Here, though, the Giants finally got the hit, the two-out hit in the ninth down to their last strike that they've been missing since May, and they immediately lost in the next inning.

This team is cursed.

Half-game back, everyone. We're cool. It's an even year, remember? An even year.