Giants hit two triples in the same inning, Ryan Vogelsong had a no-hitter through five innings, and Matt Duffy's dad recorded it all on his camcorder in defiance of exclusive broadcasting agreements.

Ryan Vogelsong has nothing left to prove. He has the fire of a competitor, that eternal flame that will always compel him into competition, but from a practical standpoint -- within the confines established by the performances and accomplishments of his contemporaries -- he has proven his mettle, passed the muster, and done is his bit for king and country. There was nothing particularly special about tonight's 9-inning complete game. Not to the outsiders, anyway. Even to some Giants fans, I'm sure, tonight will register as nothing more than a "pretty cool". And, realistically, perhaps this performance warrants nothing more than an "attaboy" and, if so, for one good reason: Ryan Vogelsong is no stranger to success.

Without rehashing his story for the trillteenth time, it's clear that the guy pitches with a chip on his shoulder and an agonizer clipped to his breast and it's not unreasonable to make a leap of psychological assessment that there's some part of him that's desperate to cling to this thing he's devoted so much of his life to; this silly, silly game we've chosen to care about. Tonight had no air of desperation. It was not a game that put it all in perspective. It was a Friday night game in New York, in a stadium that was so quiet for the game's brief running time you could've probably heard someone saying a rosary or making a confession. But this was no church and this was no baptism for Ryan Vogelsong.

It was an ordinary baseball game where a major league baseball player who shed his fringe label a few years ago simply suffocated his opponent for nine innings. He had a no-hitter through five innings and didn't seem to struggle much at all. He simply missed the Mets' bats. His fastball had the necessary run and he did a good job of mixing in the breaking ball. The Mets couldn't square him up much -- particularly in the early innings -- and the offense helped ease the pressure in the later innings thanks to a 5-run lead. Sure, with a consistently dominant pitcher, these types of games are a bit more common, but tonight was a night where Vogelsong's occasional flashes of brilliance synced up perfectly with the Giants sometimes-above average offense and we got what we saw tonight.

And the Giants absolutely needed this performance. Game 1 of a 10-game road trip, saving the bullpen and giving the team a nice confidence boost following the "demise" of Matt Cain. The Giants are going to need every last solid inning the rotation can muster while the offense awaits the triumphant returns of Angel Pagan and Brandon Belt, which may not ultimately be the cure-all but remains the team's last best hope for sustained competition.

It's not that a guy on the downside of his career had a momentary blip of genius. He's been doing that for some time now. And *that* is what stands out. That's what's remarkable. He keeps doing it. Relentlessly sticking around, contributing as a starting pitcher. Sticking around in baseball when you've been written off and you're just getting *old* is extremely hard to do. We know the game itself is difficult, now add in the psychological element, the psychological element here being in this case some professional variant of the singsongy pouty kid anthem "Nobody likes me/Everybody hates me".

Maybe Ryan Vogelsong doesn't feel like the hero after tonight's start and maybe he never feels like the hero because acknowledging that status means necessarily surrendering the label of "reject" that so clearly fuels his fire. Maybe hero is the wrong word to use here anyway. Maybe the right word to use here is one that means the most: pro.

And for that matter, Matt Duffy and Jarrett Parker became pros today and what a nice start for Duffy at second base. He made some nice contact, got hit by a pitch, turned a double play, and oh yeah, his first major league hit was an RBI-single. Maybe this is the best we get out of Matt Duffy or maybe he's Brandon Hicks' April but for the month of August. Regardless, in a parallel universe, he's not a baseball player, he's a high school P.E. teacher: 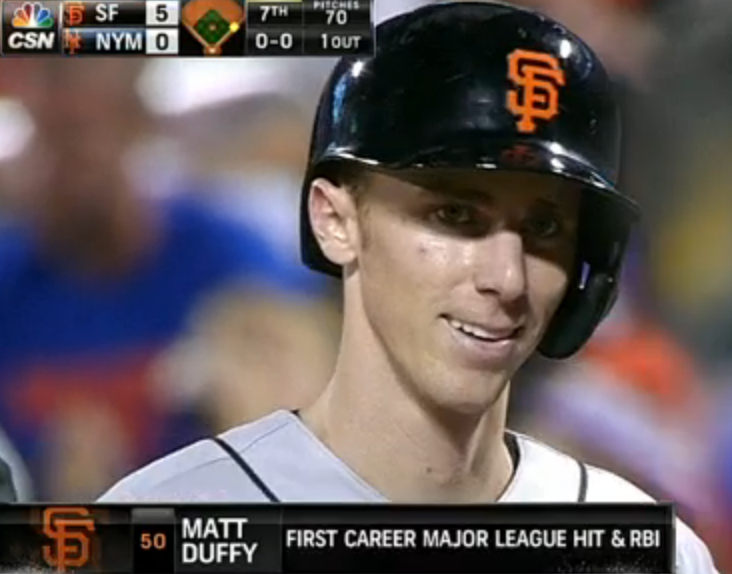 Good morning, class. I'm Mr. Duffy. Today we'll be learning about all the nifty things you can do with just a jumprope.

Anyway, you can't say the Giants did nothing at the trade deadline because -- LOOK. It's August 1st and there are *two* guys you've never really heard of before and they're both on the roster to soothe the Giants' roster sore spots. That is the platonic ideal of a deadline move. ERGO…

Bah. Hurry back, Angel Pagan and Brandon Belt. The kids are alright, but we want flowing locks and two Brandons...

When Brandon Crawford has three hits against a lefty and hits his ninth triple of the season on August 1st you have to say that he has far exceeded most people's expectations in terms of his offense. Well, I'm sure most people within the Giants organization felt this was always the guy he was going to be, but I'm not going to let anyone forget about their assessments of Armando Benitez, Jose Guillen, Orlando Cabrera and Dan Uggla. Sometimes you guess right and cut the correct wire. I'm saying part of the joy from his performance at the plate is the surprise factor. The glove has always played, but the bat has been a question mark. In parts of the past two seasons he's shown glimpses but this year he's really fought off the notion that he's a platoon hitter and I think the progress he's made overall, showing a bit more power two years ago and a bit more contact last year is a steady ascent that is both laudable and surprising. Surprise isn't bad and neither is Brandon Crawford.