You can win my money. But I have kids to feed, you know.

Hi, Grant Brisbee from McCovey Chronicles here, and I'd like to talk to you about FanDuel.

See, SB Nation has an exclusive partnership with FanDuel, your one-stop shop for daily fantasy sports. What are daily fantasy sports? Why, click here to see. Every day, there are dozens and dozens of contests that allow you to win real money with buy-ins as low as $2. Let me show you an example. (Note: this is a sponsored post with affiliate links, but all of the opinions in this post are my own.)

The folks at FanDuel gave me $50 in real money to play with, and I blew it all on one contest with a $50 buy-in. I picked players for last night's game, using a salary cap of sorts. Here's the roster I chose: 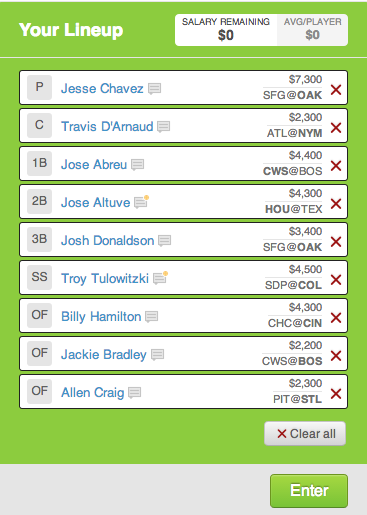 I picked Jesse Chavez because the Giants are terrible. Anyway, there were about 12 prizes of more than $100 in this contest, and the pool of contestants for this one was about 50 strong. You can do $2 games with hundreds of contestants, or you can get froggy and pit $100 against someone in a head-to-head match. Do not do that.

So what happened? Chavez pitched well, striking out all sorts of Giants, holding them scoreless, and getting the win. Jackie Bradley had a stolen base, and Billy Hamilton had 4 RBI. I should have won hundreds of dollars. But after taking that screenshot, I forgot to press enter.

I forgot to press enter.

So instead of money for a PS4, I won the knowledge that I am an awful moron who doesn't deserve nice things. Then I had to write about that stupid game, which was stupid. You should remember to press enter if you play.

If you have an interest in an McC league or contest, this is probably the place to discuss it. Now if you'll excuse me, I still have the $50, and the Giants are still playing the A's.