Marco Scutaro and the ghost of Freddy Sanchez

The Giants have acquired two contact mavens to play second base and win a World Series. Both of them went down to back injuries. One of them we might see again.

Share All sharing options for: Marco Scutaro and the ghost of Freddy Sanchez

The microdiscectomy, performed by Dr. Robert Watkins, ended Sanchez's torturous attempt this season to recover from a dislocated right shoulder, which occurred in a June 10, 2011, game against the Reds at AT&T Park. He has not played in the majors since then.

Sanchez, 34, is a free agent after this season and will be remembered for one of the most important hits in franchise history, a two-out single in the ninth inning that extended Game 3 of the National League Division Series against Atlanta.

We're just over 700 days removed from thinking there was still a chance, a slight chance, that we might see Freddy Sanchez play baseball again. In 10 years, you'll have to tell the youngsters about him. He'll be lost among the stars like Cain and Lincecum, sure, but he's already getting lost among the surprises, too. When I think about 2010, I think about Cody Ross, Pat Burrell, and Aubrey Huff before I think of Sanchez. I shouldn't. 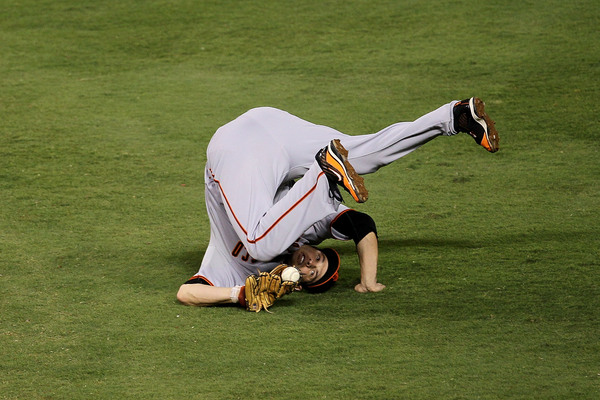 Don't forget, that catch was against Jeff Francoeur. The layers on this one run deep.

I have a lot of residual guilt, here. It feels like Sanchez was gone, and then there was Marco Scutaro, the new hotness, to make us forget about everything Sanchez had ever touched.

This comes up now because we have another chance. That same fatalistic, whatareyagonnado feeling that we had when Sanchez just couldn't get health is something a lot of us have had all year with Marco Scutaro. When the March rumblings started about Scutaro's back, it was easy to move on, to erect mental walls that would cushion the blow when Scutaro went full Freddy. It didn't hurt that the human back is a Czech art house film without the subtitles, and doctors have no choice but to pretend they know what's going on. "I think this one's about dying alone. Or factory farms. Possibly emerging sexuality."

We might see Scutaro again, though. He played a few innings for Fresno on Monday night, going 1-for-3. He also struck out twice, which is something he hadn't done in a major league game since August 21, 2012 (against Joe Blanton and Jamey Wright, of course), so he's not exactly ready to step into his old role. He might never sniff that old role again.

But I want him back, even if just as a pinch-hitter. If/when the Giants acquire another starting second baseman, it would have been too easy to forget Scutaro completely. Sure, with lip service paid to his 2012 contributions, but without remembering what it was like to see him effortlessly put a bat on almost everything he swung at.

The corresponding roster move will be interesting (Brandon Hicks is certainly out of favor, but don't forget that Ehire Adrianza is in the minors only as part of a rehab assignment; he's still out of options.) And this is not going to be the difference. This is not the talisman the Giants need to turn the season around.

It's just something I want to watch. I've spent the last two weeks randomly thinking about Freddy Sanchez, and suddenly Scutaro is in Triple-A, working his way back to the Giants' bench. Feels like there's a connection there, even if it's one I'm forcing my brain to make. I want to appreciate the guy one more time. You could use that sentence for either second baseman, but we'll actually have a chance with Scutaro.

Also, his back is going to heal completely in the offseason, and he's going to hit .330 next year. I don't normally give out fantasy tips, but that one's on the house.