Oh, but you should have seen those hits.

Pence, who was given $90 million to hit baseballs, which looks like a bargain right now.

Pence, who is almost certainly the best hitter on the team right now.

Pence, whose freakish athleticism allows him to wow us continually on the baseball field.

That guy is completely helpless against Kershaw. When the All-Star Game was in San Francisco, I went to the FanFest at Moscone Center. While I was there, I waited in line for about 45 minutes to take three swings against a fancypants video-batting-cage contraption that paired the standard pitching-machine arm with video of a major leaguer pitching. You had a choice of different pitchers, and I chose Barry Zito because of irony and lulz.

I stepped in, and the first pitch shot out of the video hole before I was acclimated to what in the hell was going on. Strike one.

The next pitch came, and about halfway through my awful swing, I realized I probably hadn't swung a bat in 10 years. I did not make contact. Strike two.

My then-girlfriend was watching me like I was going to win her a kewpie doll, her shoulders slowly slumping in the realization that she wasn't going to get one because her man was awful at everything. Video Zito wound up, threw, and I missed again. Strike three. Finally tally: 45 minutes in line to be emasculated and sad.

That's what it was like watching Hunter Pence on Saturday night. Except, he's really, really good at hitting. One of the best in the world, really. Do you know how much baseball everyone in the NPB has played? Their whole lives, sunrise through sunset, baseball baseball baseball, and they survived the professional baseball gauntlet at every turn, emerging as professional baseball players in one of the highest leagues in the world. Yet Hunter Pence could walk onto the Yokohama BayStars tomorrow and be one of the best players in the league. He's a preternatural talent, elite in so many ways.

He looked like a skinny keyboard warrior against a video Barry Zito. There was a point in the seventh where I had to check with MLB.com to see how many hits Kershaw had allowed. The answer: one. You'd think that would be obvious, that the guy was pitching a one-hitter and looking especially dominant.

Except I half-checked out after that first run. I remember the Brett Pill homer and the Brandon Hicks homer, so I wasn't despondent, but there was a ball lost in the sun and a blooper that fell in, and the Dodgers had a run. Pitcher-adjusted, they had a five-run lead.

The specifics of the dominance weren't important. One hit, two hits, five hits, no hits ... whatever. It's like spending your time tallying up how many times the mugger punched you in the kidneys. Does it matter if he punched you 18 times instead of 21? Not really. Now your wallet is gone, and you had a free punchcard for a Which Wich in there.

If the Giants win 12-0 tomorrow, they'll have evened up the runs in this series, and that will be a moral victory. So everybody hang around for that.

You don't feel especially thrilled with baseball right now, and I don't blame you. But the Giants just faced Cole Hamels, Zack Greinke, and Clayton Kershaw in a row, and they all had their best stuff and command. That's kind of a dick move, universe.

This is the perfect night to write something that's been on my mind for a while. I didn't want to seem like a reactive dink and write it after the player had an 0-for-5 night, so I wanted to pick my spot. Here goes:

He was responsible for 66 percent of the base runners tonight! He had a solid single and a four-pitch walk, which makes him the Hank Aaron Award winner of the game, and there isn't a runner up. Up with Morse! Up with Morse!

Except he isn't very good. The combination of his fast start with the realization that he was a likable goofball was intoxicating. I wanted to believe, I wanted to believe so danged hard. His career path has been completely bizarre to this point -- unlikely shortstop to minor league castabout to All-Star with the Nationals to lost and forgotten. The odds suggested he wasn't going to hit enough to make up for his defense, but the odds were weird with him his entire career.

Nope. He's not going to hit enough to make up for his defense. In the fourth inning, shortly after Ryan Vogelsong gave up his perfect game with two outs, Hanley Ramirez ... did something. I couldn't tell if it was a broken bat or a tossed bat, and I watched it five times. Whatever it was, it led to a bloop.

Here's where Morse was playing: 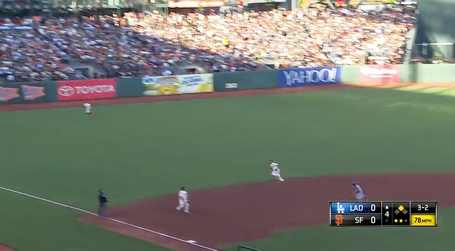 Does Ron Wotus put him there? Does he go there on his own? Doesn't matter. He runs like a Molina, so the idea is to prevent balls into the gap. I'm not sure why that strategy was being employed with a runner on second, but whatever. Morse was at the warning track, hitting on the girl Chevron car.

Hey, baby. Those new wiper blades? Mmm-hmmm. Wonder if I can talk to you about the fuel injection you're getting, mmm-hmmm.

Ball in the sun. Dude playing on the warning track. Game over. One run was too much. Later in the game, he couldn't get to a ball that Gregor Blanco would have nabbed last year, and you start to understand defensive stats a little more. Then Morse side-skipped the ball to no one in particular and, well, who cares.

Morse has driven in six runs over the last 40 games. I know that has something to do with the runners he had on base and the opportunities he's had, but it's still a jarring stat. Joaquin Arias has driven in six runs over his last 40 games, and he's starting three times a month. If Morse isn't hitting, he's one of the worst players on the team. He's not hitting. And even when he reaches base twice against an impossible pitcher, you can see how he can be a net negative going forward.

Yet I still like the guy. Hope I'm wrong.

Jake Peavy will save us. I'm half-kidding. Unless I'm not kidding at all. Probably kidding.

JAKE PEAVY SAVE US.