There's only so much a team can do when a good pitcher is going bonkers.

The Phillies should give Cole Hamels to the Giants

The Phillies should give Cole Hamels to the Giants. The Phillies are a baseball team that does not have any particular use for an excellent pitcher right now, whereas the Giants are a team that could really use Hamels. Are the Phillies being selfish? Yes, they certainly are. Nobody likes a selfish person or a collection of selfish people

The Phillies are an eight-year-old boy who sold his Nintendo at a yard sale, then found a copy of Contra they thought they had lost. "Can I have your Contra?", you ask. "No," the horrible boy replies. "But you don't even have a Nintendo!", you shout. "I know. I just like it. It's a neat cartridge" The eight-year-old boy then puts the cartridge on a shelf in his room, next to a trophy from camp and an Orioles hat signed by Jennifer Capriati, and it will never be of use to anyone again.

The Phillies are Lucy Van Pelt with a Joe Shlabotnik card, and the Giants are Charlie Brown, offering to trade all sorts of neat things. The Phillies are being selfish, keeping something they don't need away from someone else who desperately wants it. They'll eventually waste it, and no one will be happy. This, again, because they are selfish.

In conclusion, the Phillies should give Cole Hamels to the Giants because it's not fair that they have him on a terrible team when he could be on a team that is not so terrible. This is my opinion and something that I believe.

Here's what a post-Break winning jag will do for you: give you currency to go back to the can't-win'-em-all well. Losing to Cole Hamels suddenly isn't the sort of thing that makes you commit felicide in a drunk rage, which it probably would have been two weeks ago. It's a loss to a pitcher who should have dominated. When someone throws 94 with a phantom change, hard-breaking curve, and superior command, he should win. Tim Hudson didn't throw nearly as well, which means he deserved to lose, at least in comparison with the other pitcher. For a day, baseball made sense.

Just don't think about how we were saying the same things about the Giants after Stephen Strasburg smote them, and how the Giants lost every subsequent game over the next two months.

The Giants got six hits, none of them especially forceful. They drew one walk, which was about one more than we had a right to expect. It was a tip-your-cap game, which are simultaneously the most annoying games and the easiest ones to accept. At no point did it seem like the Giants were comfortable against Hamels, and I give them tremendous credit for the one run they did score.

Hope the Phillies like speedy outfielders who struggle against Triple-A pitching, because that's what the Giants are offering for Hamels (if the Phillies eat 75 percent of the salary).

Because I am a sad little man, I looked this up, and now I will share it with you.

One of the top Google image search results for "tip your cap": 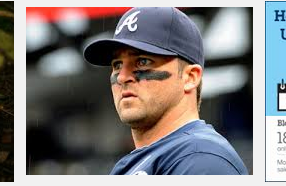 Hmm. Seems meaningful, but I can't parse it.

Ehire Adrianza limped off with a hamstring injury, confirming that second basemen for the Giants are like Spinal Tap drummers. Joe Panik choked on somebody else's vomit, Freddy Sanchez was injured in a bizarre gardening accident some years back, et cetera. We're a twinge and a tweak away from a Dan Uggla afterworld, so get ready. He's coming.

When Uggla does get called up, it's likely to be Panik who goes down, which is understandable. Regular at-bats are important for him, and Adrianza is out of options. Don't forget about the nuclear option, though: releasing Joaquin Arias. If the Giants did that, they'd be on the hook for $1.45 million next season, and they'd have to find a new utility infielder.

But the Giants are also aware of sunk costs, from Dave Roberts through Aaron Rowand. And there is nothing that indicates that Joaquin Arias is capable of playing baseball right now. He's swinging like his bat is taped to the back of the catcher's mitt.  It's the most utterly helpless I've seen a baseball player look in a long, long time. His last at-bat of the afternoon:

Jonathan Papelbon is good, sure. But those were still 90-91 fastballs, right down the middle of the plate. No deception. No deception needed. Arias was but one of the many reasons the Giants didn't win; he's also the easiest problem on the roster to fix. He doesn't look like a major league hitter right now, and it's a stretch to suggest he looks like a minor league hitter.

The worst OPS from a San Francisco Giant in a single season, minimum 100 plate appearances:

It would take nothing more than a good game or three to get Arias off this list. For now, though, he has historic company.

Jettisoning Arias wouldn't fix whatever ails the Giants, and the transaction genie wouldn't sneak into Hamels's room and give him five extra earned runs. But it probably wouldn't hurt, at this point.

In conclusion, look at this stupid opinion.