Share All sharing options for: Giants win series against Phillies behind memorable plays and images you won't soon forget.

The beauty of Baseball contained between two foul lines cannot be equaled or described by any other venture or gathering of humanity, now or ever in recorded history. Those events we experience become the stories we share and the emotions they elicit become fused to our psyches. Baseball's profundity comes not from the sheer tonnage of its history, however. No, it is laid upon us with a deft touch. It takes only a few plays or a single person or maybe just one lasting image to change us, sway us, make us fall in love with Baseball forever.

How would you describe tonight's game other than "a serious of visuals I will not soon forget"?

The Giants played a 90-hour game last night and won big. They suffered through a 59-minute rain delay tonight and a scoreless tie until the ninth inning before breaking through and winning yet again. They've won 5 of 6 since returning from the All-Star break which was preceded by an agonizing 10-22 stretch that saw the Giants fall out of first place in record time and behind the Dodgers. But now -- first place again and after tonight, by two games. The way the standings look, of course, is ultimately most important, but the memories we'll have from this one won't be the 2-game lead, it'll be like the visual above.

Or remembering that the rain surrounded second base with an honest-to-goodness slipping slide (spelled this way to avoid legal harassment by SlipCo.) and the visual of Hunter Pence's desperate run for third base after his slide on a steal attempt in the top of the 8th inning took him off the bag. You remember that, right?

That was exciting. And memorable. You know what's even more memorable than this play?

The nightmarish faces of Hunter Pence during this run:

We were fortunate enough to witness Total Hunter Pence on a single play. Look at that intensity. Look at that beard. He looks at once like a ballplayer, a Civil War soldier fighting for control of the closest bayonet against a Confederate, and Popeye. But that's what hustle looks like: a beautiful mishmash of hodgepodge and compound descriptors.

And he's ours. All ours.

Well, technically, he's under contract with the San Francisco Giants Baseball Club and he's theirs, but we get to watch him all the time and when he hustles it's inside the laundry for which we cheer. It is glorious. He is glorious.

And he's ours. All ours.

It was a tale of two takes that helped net the Giants the win and Hunter Pence was involved in one of them. The other guy, though, was Hackin' Hector Sanchez, the dude with the penchant for first-pitch pop-ups, but also for the occasional tie-breaking home run and certainly for catching all 14 innings last night. One can't have a penchant for something like that, but anyway, I'm getting sidetracked by poor syntax and grammar. The point is, Hector Sanchez drew a walk against Jonathan Papelbon that helped setup the Giants' 3-run inning. He did so by taking what looked like a pretty close pitch on 2-2, but... 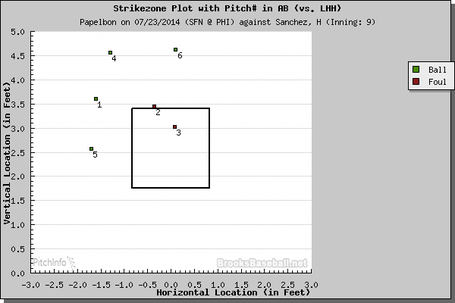 ... it wasn't all that close and Hector wasn't all that interested in hacking at it. Maybe, just maybe, fatigue helps him be a better hitter. Y'know, William Shatner is known as being an actor whose every acting instinct is completely wrong. And yet, if you can tire him out and just make him stop trying, he's actually a pretty solid actor. Directors figured this out and started shooting his angles in scenes *last*. He'd have to sit through everybody else's close-ups before they got to him. He'd be so tired he'd just deliver his lines naturally and, boom, serviceable. Maybe that's all Hector Sanchez needs to become a better hitter: fatigue.

And since this was a game of distinct images, that take was very impressive. He should've been swinging. It was a splitter designed/placed for that specific purpose. Everything in the Phillies' scouting report on Hector Sanchez, everything Papelbon had read or seen of Hector Sanchez confirmed that he'd swing at a close pitch out of the zone. And yet... a walk. 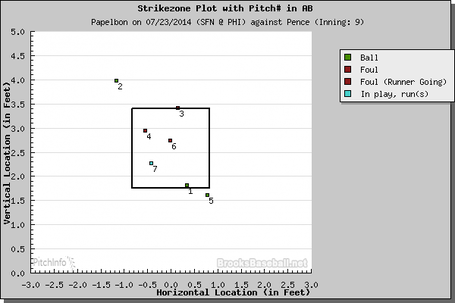 Called a ball and it should have been, but my goodness did it look like it shaved the outside corner of the strike zone. That could've legitimately frozen Pence or he could've picked up the slider's spin and thought it would slide far enough away from the zone. If the latter event occurred then he got lucky, because that is pretty much within the margin of human/umpire's error. It was a memorable take which then, of course, led to the memorable moment of a jam shot landing just near the line in right field, clearing the bases and giving the Giants their lead.

Hunter Pence's hustle power, however, is no match for Jonathan Papelbon's glower power:

Now, in addition to being the coolest 24-year old on the planet, Madison Bumgarner happens to be one of the best pitchers in the sport. And he's ours. All ours. 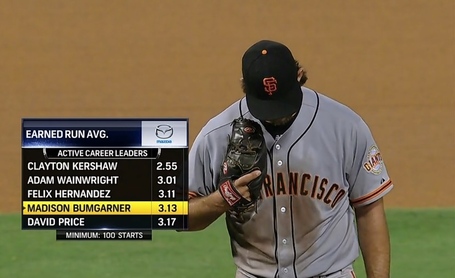 Hey, that's a neat-o list, Phillies broadcast. But what about in Giants history, which is way more important to me? How about by ERA+ in Giants franchise history as a starting pitcher through age 24?

Madison Bumgarner is amazing. And if I sound like a sycophant or a zealot, it's only because Bruce Bochy sounds like that after tonight's game, too.

The team needed him and he responded. He satisfied the emotional/psychological component of the #1 starter. And his pitching line satisfied the performance component, too. This was his second straight quality start (after 4 kinda shaky, kinda crummy ones) and it was against a team against which an ace should have a quality start.

He also smoked a base hit into center field tonight. Madison Bumgarner is so good on both sides of the ball that Bochy's decision to pull him for a pinch hitter (and having thrown only 93 pitches through 8 innings) felt wrong in every possible way. Surely, he's a better hitter (outside of Scutaro) than whomever else would pinch hit for him and, surely, he'd be as good as the bullpen, given his dominance throughout the game. It all worked out, but man oh man, when it's legitimate to question why you'd pull the ace late in the game when the team's scuffling for runs you know he's *the* ace.

Tonight's game was memorable. After Pence's big hit, the feeling I got felt similar to the 4-game sweep the Giants pulled off in Milwaukee back in 2010. Probably not in any way the same situation, but tonight's win and these past few games felt a lot like what that Milwaukee series wound up being in retrospect: a turning point. This isn't really an attempt at making a grand pronouncement. The Giants won in style tonight and I'm simply enjoying the moment, basking in the afterglow. Tonight's game had striking visuals, great plays from great players, a rain delay, a slipping slide, and early in the game, a weird throwing error which got Carlos Ruiz to third base --

But that's not the striking visual that will remain forever etched in my brain.

MAGNIFY AND ENHANCE (hover over image to watch 'em move)