Tim Lincecum got a save, and the Giants are in first place.

This is the game you remember, the game in the drop-down menu of your brain when you think "2014." The game that you keep revisiting the next day at work, scanning your memories and hoping to find different nuances and quirks. You'll remember the sound of the empty ballpark, the suddenly audible hecklers, the way every bat sounded like it broke on a hard-hit ball. You'll embrace the wackiness of Tim Lincecum getting a save, the uncomfortable feeling you had when you realized that George Kontos's eyeballs were replaced with check-engine lights. It all added up to that, a six-hour game that's pretty much the reason you watch baseball.

If they lose, you wasted six hours and Joe Panik is hurt and the bullpen is shot and Lincecum's going to be tired on Friday and now you have to take the trash out because it's trash day tomorrow and your hand got in the trash and it was raw chicken aw jeez and one day you and everyone you know will die.

So let me point out that it was a good thing that the Giants won this particular 14-inning contest, a game that happened to end with them in first place. Now it becomes the game you remember fondly instead of something that makes you rethink the choices you've made in your life. There was six hours of baseball, and at the end of it, the Giants were in first place. A starter relieved, two relievers basically started, and Hector Sanchez won't be able to take his own cleats off for a week.

You would have sat in the closet and chewed on jackets if they lost. Instead, it was a magical game that helped remember why you care about baseball in July, even if it really is a dumb sport. It was the game you remember.

If I'm reading this right, that was the third-longest game the Giants have played since moving to San Francisco, just seven minutes behind the 18-inning game from 2001 (in which Ryan Vogelsong took the loss).

The longest game was a 23-inning game that was the nightcap of a doubleheader, if you're fixing to complain about this game.

There are no heroes in sports. Let's talk about the heroes of Tuesday night's silliness.

The disclaimer is there for obvious reasons. Heroes are driving ambulances in a war zone or going back into the fire to get a kitty. Baseball is a way to avoid thinking about real heroes and why they exist. However! When you get a rush of endorphins after a game like this, when baseball fulfills its purpose so perfectly, there needs to be a word stronger than Really Good Player. There needs to be, if not a word, something that's a cross between a Croix de Candlestick and a Willie Mac Award. We can make out of tinsel and CD cases and send somewhere.

Whatever. Here are the players who deserve special attention. The heroes-not-heroes-but-baseball-heroes of Tuesday night's game.

He had nothing. He wasn't supposed to pitch, but he was called upon in an emergency. This was what was in his arm.

This is not my beautiful fire extinguisher! This is not my beautiful right arm! It's a family of possums. Literally a family of possums in his right arm. Literally.The slider was mostly useless, and the fastball was Yusmeiro Petit speed multiplied by Jonathan Sanchez command. Kontos shouldn't have been out there, and he looked like it. There was no choice.

Kontos was outstanding, gutting through 2⅓ innings and getting the win, somehow giving up just one run. Dr. Jobe's face is probably on a tortilla back at his hotel room, but he won't regain feeling for a while yet. He can eat it on the plane! He also could have been a goat if it weren't for ...

He brought the tying run to the plate. You can say there wasn't a lot of pressure because of the big lead, but Lincecum made one mistake and suddenly the tying run was up. It wasn't his fault, but he had to pitch like it was. A second big mistake would have undone everything.

Instead, a save! A glorious, sweaty save. Here's a list of pitchers who threw a no-hitter and recorded a save in the same season. The list includes Nolan Ryan, Jim Bunning, Gaylord Perry, Carl Hubbell, Walter Johnson, Warren Spahn, Sandy Koufax ... and Tim Lincecum.

The reason for the season. If not for Posey, the game would have been a garden variety turd.

It wasn't a fat pitch, either. It wasn't even a strike. 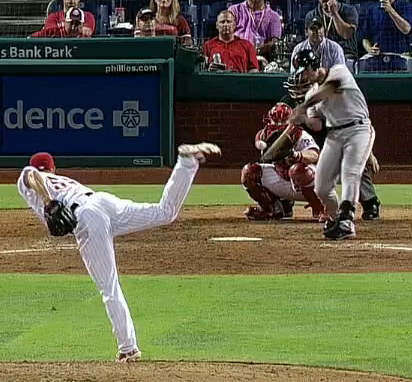 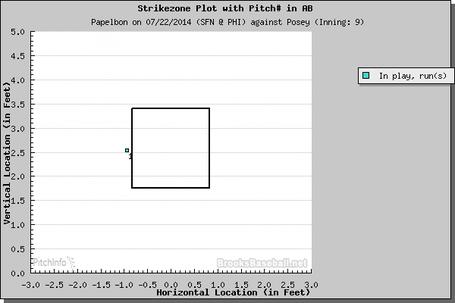 Dunno if Posey was sitting on that location just because, or if he had an idea of how Papelbon was going to pitch him, or if he just reacted and made the best of a pitch that should have busted his thumbs. But it went really, really far.

Reminder there was once a time when the Giants had to trade for Orlando Cabrera because they weren't sure if Crawford's bat was acceptable in a pennant race. Listen to this call from Duane Kuiper. It was perfect.

He's really good, but I'm tired, and the orchestra is starting to play ...

... and I'd like to thank Santiago Casilla and Javier Lopez and Jean Machi and the rest of their bullpen. GOOD NIGHT EVERYONE. THANK YOU AND GOOD NIGHT.

I thought it was really weird that Joaquin Arias pinch-hit with two runners on against a lefty reliever in the sixth instead of Adam Duvall, but I'm not even going to bring it up because I'm drunk on extra innings. I'm also not going to speculate on Dan Uggla showing up because of Joe Panik's ankle injury.

No, the Giants just won a 14-inning, six-hour game and now they're ahead of the Los Angeles Dodgers in the standings. And all of you guys were so mopey in June! Not me, though. Nope. Optimistic the whole time. Just waiting for the rest of you to come around.