Tim Lincecum pitched well, and he also pitched one too many innings.

In May, Sunday's game would have been an even-the-'27-Yankees game. Hey, even the '27 Yankees lost a few games, can't win 'em all, that's baseball for you.

In July, though, we're still scarred by the Giants tinkling away a 9½-game lead in what seemed like a two-minute time-lapse video. This game stings a little more, even after the first two wins, even after the strong start to the first half. They had a chance to sweep, and they were facing a bad pitcher. Alas.

It was a great game for second-guessing, though, and second-guess we shall. The two obvious targets:

This is some A+ first-guessing, actually. I'm tired of stat dorks using numbers and statistics like "strikeouts" and "earned runs" to make decisions. Get your nose out of the spreadsheets and watch the damned game. Use your eyes and common sense.

Which is to say: Tim Lincecum allowed zero runs and struck out two in the sixth inning. He also pitched horribly. With a runner on second and no outs, Lincecum hung a balloon to Giancarlo Stanton, who swung through it. He eventually struck Stanton out on a beautifully placed high fastball, but he hung another balloon to Casey McGehee, who had already hit one for a home run in the first inning. The ball was roped, and it probably would have gone out of some ballparks. Blanco tracked it down. Lincecum hung two change-ups to Garrett Jones in the next at-bat, with Jones hitting them a combined 850 feet foul, and that's being conservative.

Lincecum finally ended the inning by getting Marcell Ozuna to ground out on a belt-high change in an 0-2 count. The first pitch of the at-bat was a belt-high floating slider.

Three outs, no runs. But Lincecum was lucky, so lucky. He had thrown 93 pitches, and his stuff wasn't nearly as crisp as it had been for most of the game. His spot in the lineup was coming up. This was an easy decision. He was done, cooked, thanks for the quality start. Other than the strikeout pitch to Stanton, he looked like a run waiting to happen.

Bochy, though, was probably thinking about stats. Mathematical abstractions like "wins" and "runs", so he let Lincecum go back out there. He hung a couple pitches to Adeiny Hechavarria before giving up a double. Then he threw a wild pitch to give away the game. His last pitch of the game was a 87-mph fastball down the middle on an 0-2 count. This is because he was a tired pitcher.

It's a shame, too, considering that Lincecum threw very well for most of the game. He still got the quality start, still kept the Giants in the game. But he shouldn't have been out there in the seventh. The Giants' fanatical devotion to statistics got them in trouble again.

This gets tricky, because it's probably safe to assume that there's something wrong with everybody on a major league roster right now. There's something hurt or sore with everyone right now, and rest is a good thing. I don't know if Crawford has something going on, but it's safe to assume so, just because it's the middle of a long baseball season. As such, giving him a day off against a left-hander might not be a bad idea.

Except it came on a day when Brandon Belt was also out, which forced Hector Sanchez into the lineup. The lineup after Morse was a jumble of Triple-A talent and slumping hitters. Sanchez is having a dreadful season, as are Joaquin Arias and Gregor Blanco, and they all played worse than expected, somehow.

Would Crawford have made the difference? Probably not. It would have been nice to find out, though. Arias is a shell of a baseball player right now, offering absolutely nothing. Just because I'm right-handed doesn't mean I should be in the lineup against a lefty. If that seems like an absurd fallacy of an argument, you haven't watched Arias play lately.

On the other hand, what is Bochy supposed to do with Belt out? Who are the right-handed options on the bench? Arias, Sanchez, and Ehire Adrianza. That's a failure of roster construction, not managing. The Giants need a right-handed infielder or center fielder who can do something that resembles anything.

Most teams start players they shouldn't when two of their starters are injured. That explains Blanco and Sanchez. Foisting Arias on the lineup when he didn't need to be there, though, was something of a tipping point. 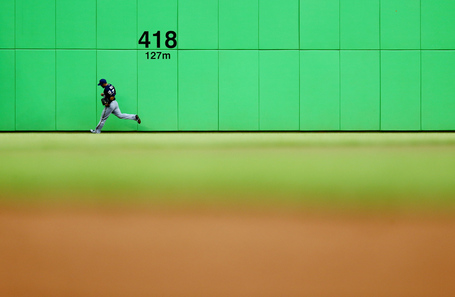 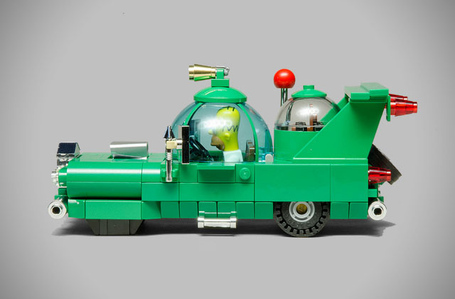 Same color. Probably more of a coincidence than we might think. Marlins Park is The Homer of baseball parks.