Second half, you seem nice. Don't be a jerk.

The second half started with a state-of-the-wounded address from the Giants. Angel Pagan probably isn't coming back until August. Marco Scutaro has a stiff neck. Dave Righetti went in an airplane with a case of the viral crud, and the whole team had to make an emergency landing in Las Vegas. Matt Cain's elbow is barking, and we didn't even know it was awake.

Then the Giants baseball obliterated their baseball opponents in a baseball game.

It was counterintuitive. The Dodgers are down 3-0 as of this writing, which totally guarantees they're going to lose and the Giants are going to have a share of first place. And we were so worried about things. The first win of the second half followed the script I posted to r/FanFiction, with the good hitters hitting and the good pitchers pitching. Dingers, two-out hits, fantastic defense ... we remembered games like this. We used to call them "May."

It means as much as an Opening Day win -- Edgardo Alfonzo is back! -- but it's comforting all the same. It's also comforting to know that the Giants can be the Paul Goldschmidt under the beds of other teams.

Hunter Pence made a great catch in the second inning.

Watching it at regular speed doesn't do it justice, though. A slowed-down GIF:

Note the eye shifting to reptilian form halfway through. 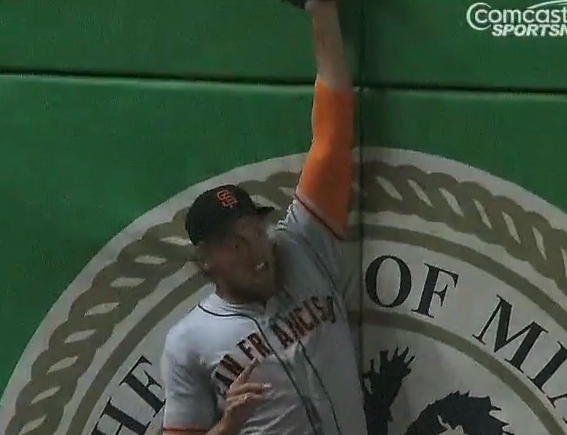 Sublime. This is the kind of thing we take for granted as baseball fans because we have to. If Pence doesn't make that catch, how does the rest of the game go? Giants probably win, sure. But maybe Bumgarner throws 10 more pitches that inning. Maybe the hitter gets a single and he throws 20 more pitches. Maybe the Marlins score a run if the catch isn't made, and the collective clutch-sphincters of the Giants clench up in a one-run game, and the two-out hits don't happen.

I watched a documentary on this sort of stuff, you know.

Mostly I just wanted to point out that picture. Look at that eye dot!

The best part about the Giants hitting is that we can just ignore how good Bumgarner was. The default reaction is something like, mmm-hmm, that guy will do that. He's pretty good.

Four hits, seven strikeouts, two walks, one run. The run came on a 450-foot dinger to Giancarlo Stanton. Bill James came up with something called "Game Score" to evaluate how well a pitcher pitched.

Let me fix that.

9. Add five points for each 450-foot home run given up to Giancarlo Stanton when the game is out of reach.

Because those are awesome.

Now the Dodgers scored two runs, and I feel like an ass. C'mon, Cardinals. What'd we ever do to you?

The other games in which the GIants scored eight runs or more:

So many Machis. So many Bumgarners. If you ever wondered why Ryan Vogelsong looks so surly all the time, this will give you a pretty good idea.