That was the most Giants-free All-Star Game since ... lemme check ... last year. The Giants are 0-for-2 in the last 18 innings of the All-Star game, with 0 IP. If you're thinking that's punishment for this ... 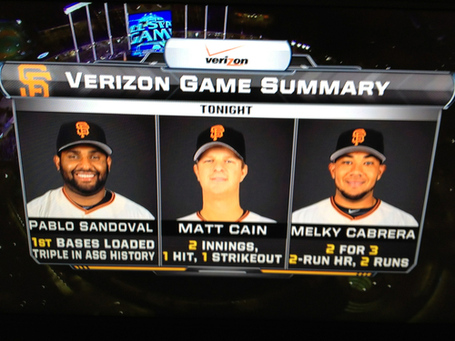 ... you're probably right. There was a chance that we were going to see Hunter Pence running around the bases like an eight-jointed antelope, or maybe stick his tongue out while he made a sliding catch. Instead, he saw a couple pitches and grounded sharply to third off Greg Holland.

The American League won, 5-3, with Pat Neshek -- possibly the easiest player in the game to root for-- getting the loss, and Adam Wainwright grooving pitches. Mike Trout was outstanding. Yasiel Puig was awful. And Hunter Pence grounded out.

It's not like I was expecting five Pence at-bats, with Joe Buck and Harold Reynolds waxing rhapsodic about his beard, followed by three quick outs from Tim Hudson for the save. I ... I guess I was expecting exactly this. The minimum Giants that the FDA allows, surrounded by a whole lot of nonsense we didn't care about.

We'll sure care about it in October, though. This time, Game 4 or Game 5 is going to be at AT&T. Buck will describe the scene succinctly. "Bartolo Colon ... looking for the complete game, hoping San Francisco can celebrate the city's first-ever World Series win at home." Reynolds will add, "It's a good chance to win the World Series, which in my opinion, is just about the most important thing a team can do in the playoffs."

Grounder to Chase Utley, who throws over to Brandon Belt ... and for the third time in five years ...

You probably know. But maybe this will hose the Dodgers, whereas Buster Posey or Michael Morse would have hit a three-run dinger to ruin everything.

There was a televised hagiography on Tuesday, and a baseball game accidentally happened. In the middle of it, Hunter Pence grounded out. The highlight of the entire event for the Giants was Hunter Pence dancing on the red carpet.

Can't wait until that championship clincher at home, everyone. Can't wait.