That was bad, bad baseball.

For the last two months, we have been spoiled. Don't even try to deny it. Spoiled. Two-out hits, series wins, comebacks, and more series wins. It's been a charmed life. And, then, on Tuesday, we got the following:

That's just how things went. Over and over again, that's just how things went. That was bad baseball. A lousy, good-for-nothing, deadbeat game. Almost certainly the ugliest loss of the season. I guess the last completely ugly loss was on May 26 against the Cubs. If you're looking for the last not-in-doubt, never-interesting loss before that, you would have to go back to to April 21 against the Rockies. I'm ignoring a couple 5-0 losses, but whatever criteria you use, you're going to see a paucity of completely miserable losses filled with bad baseball.

That was bad baseball. 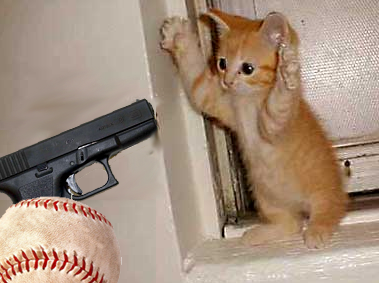 No! Don't do that! You have people who can help you, baseball! Bad baseball, bad!

Tim Lincecum doesn't know where the ball is going, and that makes him effectively wild in some games. It makes him plain wild in other games. It makes him eminently hittable in the rest. Pitchers can be worthwhile with that combination, as long as there's the right balance and distribution of said events. For Lincecum, the distribution is all off, and the plain-wild and eminently hittable outings have the majority. They have a large enough majority to overturn effectively wild's vetoes.

This is discouraging. And as someone who was so scared to see Lincecum in another uniform, that I was unable to evaluate his two-year deal rationally, it's not like I can point fingers or harrumph my way into outrage. It's just discouraging. And the old worst-case scenario of optimists everywhere -- just put him in the bullpen and make him the super-relief-ace from 2012! -- is looking like a bad joke that sets up a punchline the ends first-inning runs.

Even if the solution were to put Lincecum in the bullpen, who does he bump? Not one of the late-inning guys. I'd rather watch George Kontos in the middle innings, at least until Lincecum proves he can be effective in any role. Yusmeiro Petit? Could Lincecum become the Yusmeiro Petit with training wheels? I don't know, man. I'm thinking Petit makes the bullpen better than Lincecum possibly could.

There's no way Lincecum finishes the year in the rotation. I'll be shocked if he finishes July in the rotation. There's a chance he can pull a Vogelsong -- reclaim some of what made him so good, for no discernible reason, when you least expect it. But after two-and-a-third years of mostly lousy pitching, I can't figure out why a contending team should expect anything different.

Maybe next year will be different!

People blaming Hector Sanchez's catching or game-calling for Lincecum's slump: get outta here. This is a problem that transcends personal catchers. Unless Sanchez is calling for the hanging nonsense and the 88-m.p.h. fastballs down the middle, this isn't the personal catcher's fault.

You can tell when they give those signs, too. Fist curled into an open circle, followed by a vigorous up-and-down motion. Pitchers hate those signs.

I wish you could watermark jokes.