Naming Day: The home runs of May

What a ball sows on its nameday, it reaps all year.

Share All sharing options for: Naming Day: The home runs of May

The Giants hit 29 home runs in May. That's disappointing because it was less than 30. They hit 34 in April. Was it the tougher competition? I don't think so. The Giants have the best record in baseball heading into June (jinx) and they have been bashing opponents, regardless of standing (double jinx). Were there fewer days in May? No, that's not it. I think they just got tired of mashing. Okay, maybe it was the injuries. Or maybe they're saving them for June or July or August or maybe even September or October (triple jinx).

What I'm saying is, I think it's ridiculous that the Giants combined to hit fewer than 30 home runs in a month.  Nine other teams hit more home runs. The Giants tied with the Padres, even. The Padres!

Despite the crushing disappointment of fewer home runs, we should take some time to remember that every baseball is special and worthy of remembrance. Here now, the names of the dearly departed shots off Giants' bats in the month of May.

6. "Woodchuck" - May 4, 2014
Brandon Crawford (417 off of Alex Wood)
Brandon Crawford does not want to hear about platoon splits. "Alex would," Crawford scoffed as he rounded the bases (probably). BONUS: I'm in this video. 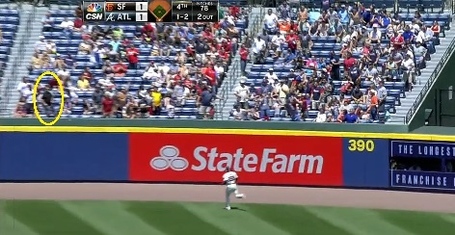 8. "Thwapdown" - May 7, 2014
Brandon Belt (407 feet off of Gerrit Cole)
Belt just thwaps this ball with a quick stroke and totally murders the ball despite the cold, oppressive air of PNC Park.

9. "Waiting to Beckhale" - May 8, 2014
Brandon Hicks (378 feet off of Josh Beckett)
Josh Beckett is known for taking a long time between pitches. And then he throws an aching slow curveball. Suffice it to say, Brandon Hicks had to wait a long time to hit this one out.

12. "That felt better than having my lung punctured by a broken bat." - May 12, 2014
Tyler Colvin (405 feet off of Gavin Floyd)
A no-doubter into McCovey Cove for Colvin's first hit as a Giant. By all accounts, he's a polite guy who says "Yes, sir", so, I can't imagine he'd stoop so low as to name a home run.

13. "Hi-Slice" - May 14, 2014
Hunter Pence (421 feet off of Julio Teheran)
Hunter Pence's power is such that he can rally total strangers to shame a thief into returning stolen property *as well as* hit baseballs to one of the deepest parts of a yard where only lefties can feel confident (and then only a little bit) hitting towards.

15. "Boule Humide" - May 14, 2014
Brandon Crawford (382 feet off of David Carpenter)
This ball gets wet and Brandon Crawford's hair and beard situation remind me of those French male models full of ennui.

17. "Supper" - May 18, 2014
Pablo Sandoval (400 feet off of Jacob Turner)
Hold on. I know you think this is a fat joke, but it's not! Not really! Supper is such a gentle-sounding word, but suppertime, or family dinner, is usually a big deal. Sharing a meal at the end of the day helps with family bonding and it's a good chance to decompress after enduring the stress of the world all day. So, a gentle word carries a lot of meaning, just as this home run does here. Not just because Pablo Sandoval's first six weeks of the season were mostly terrible, but because it didn't look like a home run off that swing and off the bat, but then, bam, gone. The power of Pablo. They call him the Panda, but a gentle name belies his true power.

20. "Nyo Dyouybtyer" - May 21, 2014
Brandon Crawford (415 feet off of Matt Belisle)
Stop. Stop using so many y's, Brandon. I feel like I'm sifting through a poorly-assembled Scrabble set.

21. "Tiesto" - May 22, 2014
Hunter Pence (382 feet off of Tommy Kahnle)
Hunter Pence named this one after the famous club DJ Tiesto because his swing on it was total club life.

22. "Mine" - May 23, 2014
Pablo Sandoval (381 feet off of Kyle Gibson)
That pitch was right to Pablo Sandoval's "MINE" zone. One might be tempted to say that a young pitcher like Kyle Gibson can't go there against Sandoval, but any pitcher would've been just as "MINE"'d in that spot.

26. "If he's so smart then how come I homered off of him?" - May 26, 2014
Pablo Sandoval (406 feet off of Jeff Samardzija)
Only Pablo Sandoval knows how he hit this one out of the park. Samardzija certainly can't figure it out.

29. "The Omega" - May 30, 2014
Hunter Pence (400 feet off of Adam Wainwright)
Okay, the true distance on this thing is only 400 feet, but it's clearly a bajillion feet. I'm pretty sure an interdimensional portal of some kind was opened up based on the power of this sucker. Quite a way to end the month of homers.