The Giants are your worst nightmare. They lost again. They will continue to lose. The losing will never end.

The only way it begins to make sense is if you reset and view the beginning of the season as a dream.

Share All sharing options for: The Giants are your worst nightmare. They lost again. They will continue to lose. The losing will never end.

As the final day of first-place Giants baseball drew to a close, I wondered how I was going to come up with something to say about a team that got off to a hot start but cooled to the point that Kurt Vonnegut's estate had begun harassing the organization for royalties. Certainly, a 162-game baseball season has its ups and downs to which few teams are immune; no single player could reasonably be held responsible for the Giant's first ever four-game sweep at AT&T Park; the Dodgers had always been viewed as the de facto NL West champs, so, it didn't quite make sense from a logical standpoint to castigate the team for being feckless, pointless, and radioactively awful; and yet... and yet, that course of action just felt right. What's the point of looking on the bright side when it's impossible to find the bright side because the Giants have cast such a long, dark shadow?

The Giants are a plane crash humping a train wreck. The Giants are a "first place team" in name only. Oh sure, the standings will corroborate whatever loon makes such a declaration, but it's all just a formality at this point. Enjoy the next day or so, because by tomorrow's end, they will no longer be in first... because the Giants are this:

The Giants are this:

The Giants are this: 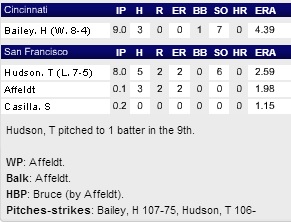 Nearly getting no-hit by Homer Bailey (less than a year after he did accomplish the feat) is not inherently the mark of a team in a tailspin and Tim Hudson kept them in the game, but wherever you see Jeremy Affeldt's name... yeah. That's what the Giants are right now. If it's not one thing, it's another. There was very little chance the Giants were going to win today, but given that they have now revealed themselves to be who they really are (last year's team), their margin for error has shrunk down to basically nothing. They're not good enough to overcome mistakes and they're not good enough to avoid making multiple mistakes.

In short, I wrote in this space that the Giants are a good team. I wrote it many times. But I was wrong. Wrong wrong wrong wrong wrong. This is the same basic team as last year. It doesn't make sense that Angel Pagan's absence would sink the ship this quickly and this far off the coast of winning, so it can't be simply that. And it can't just be a slump: too many leaks have sprung up in too many different places. It's not merely luck: this Junedoggle has been a mirror image of last year's June-September. No, the answer is that they were never as good as they looked and it's now not even a guarantee that they'll look as good as they were projected to be before the season. It is unlikely that Michael Morse will never get a hit in a major league game, but it sure does feel that way.

The Giants weren't even supposed to be in this position. They were supposed to be playing hard to stay in 2nd place and a possible shot at the second wild card. Four months of watching them drown is probably going to be worse than watching them narrowly miss the postseason, but here we are, powerless to stop exactly that image from happening again and again and again.

The Dodgers won today and are now tied with the Giants for first place. The nine game lead is gone. The payroll is maxed out and the farm system is a nuclear wasteland, so there is nothing that can be done except watch them play out the rest of the season.