Share All sharing options for: Giants ruin everything, everything is ruined

And in a month of losses that made you throw things, here was the throw-thingiest loss of the year.

If the Giants had lost their first 15 games, you would have been numb by the 11th or 12th. Just not our year. What are you going to do? Let's look at the trade deadline. Somehow, the Giants are in first place halfway through the year -- literally first place, literally halfway through the year -- and you feel worse. Much worse. You are floating outside of your body right now, sobbing and shrieking. WHY, WHY, WHY HAVE YOU FORSAKEN US, FIRST PLACE TEAM THAT WAS SUPPOSED TO BE IN SECOND THE WHOLE TIME? WHY?

There will be ground rules for this recap. They're simple ground rules. They go like this: If your first reaction to tonight's loss is a bunch of swear words directed at Sergio Romo, you're probably not in the mood for a recap at all. Sit this one out, slugger. Be frustrated at the situation, be frustrated at the decision to keep using him in the ninth. Don't be angry at the player. That kind of parasite fed off Aubrey Huff, kept going right through Andres Torres, and it's now hosting with Romo. Groan when (player) comes in. Expect bad things. Wonder why (player) is in that position. Don't focus your rage at that player.

Being tremendously shaken and upset at what's become of him? Well, that's the only reaction. He's somewhere between not right and broken, and it's not like we're dealing with sample-size issues. What in the hell is going on?

I could pull up Romo's career splits against left-handers (excellent). I could talk about what 33⅓ innings means when it comes to sample size (not much, as a matter of record). Except I don't think that sort of thing helps right now. This isn't the same Romo we're used to, and it's not even close. There's no use pretending, even after accounting for the fits of bad luck he had against the Rockies.

The walk to Votto didn't bug me. Left-hander with power, one-run game ... tease him and see what happens. The 3-2 pitch missed by a couple inches. Not ideal, but it's not like it was a 39-year-old Sean Casey up there. Romo had to be careful, and he was. The next two pitches he threw, to Brandon Phillips, were stunners. Dipping, diving sliders right out of the zone, perfectly placed. Phillips was helpless.

That kind of hanging slider didn't show up in 2010 or 2011. It wasn't around in 2012. It's a problem now. It's unusable against lefties, untrustable against righties. I'd like to think it's a mechanical issue, something that could be fixed with a couple hours of video and a side session with Mark Gardner giving the thumbs up. That's not how it works with relievers, though. After years and years of meritorious service, Romo might not be closer material.

I'll lean on this hackneyed analogy again, only because it's the only thing I can think of: The difference between a .230 hitter and a .300 hitter is seven hits every 100 at-bats. What we're seeing from Romo right now is an extra seven hangers for every 100 sliders thrown. Which doesn't sound like a lot when you put it like that. But just like you can tell the difference between a .230 hitter and a .300 hitter, you can tell. Note: those are numbers pulled from my backside, so the real difference might be an extra 50 hanging sliders for every 51 attempted. Don't know.

This was the head-shaving that will make the Giants do something. There will be a shakeup, I'm guessing, and then they'll trade Kyle Crick for Glen Perkins at the deadline. Assuming they're within six games of first, mind you. Or maybe the shakeup will involve an internal option who seizes the role. Jeremy Affeldt is a dark horse.

Remember, the alternative to trotting Romo out there was to start the ninth with Javier Lopez against Joey Votto, and that's exactly what spoiled the game in the 11th.

Remember when the Padres had an insurmountable lead in 2010, but it turned out they just weren't very good?

My first reaction: What the shit?

Then I calmed down. Arias swung at the first pitch like he was trying to swing a longsword through an invisible bowl of porridge. That brought up my second reaction: What the shit?

Then Arias chased at a slider by his back foot. And I thought, no, seriously, what the shit?

Finally, he made contact, and my sarcastic clapping woke the neighbors up. Hey, what the shit, good effort.

I get that Aroldis Chapman transcends normal lefty-righty nonsense. It's not like Bruce Bochy pulled Brandon Crawford to avoid Joe Thatcher. Chapman might be the nastiest left-handed reliever in the history of baseball. That's not hyperbole. So when you have a left-hander coming up -- and let's face it, it's not like Crawford is Barry Bonds -- you are perfectly within reason to look for right-handed alternatives.

Except Arias, while still being an acceptable utility option, isn't a fastball hitter. Being an atrophied benchie, he certainly isn't an Aroldis Chapman-fastball hitter. Defer to the guy who's seen live pitching in the game (Crawford) if you want a ball in play, or send up the guy who can hit any fastball out there (Brandon HIcks). After Arias swung late, so late, at the first pitch of the at-bat, I was already looking toward extra innings. He was so overmatched. And you can guarantee Bochy saw the same thing after one swing. "Aw, nuts."

You don't notice if this is one game in the middle of a 7-3 stretch in May. You sure as heck notice it right now. Zack Cozart has killed the Giants over the last three games, and the Giants can't get a runner in from third. That's how June's going.

I have a feeling that in 2030, there will be a 30 for 30 about Buster Posey against Aroldis Chapman over the years. That's just the best matchup to watch, starting with the 2012 NLDS.

The Giants made a habit of sprinkling fringe starting pitchers around the league last decade. There was, let's see, Carlos Villanueva, Brian Burres, Clay Hensley, Matt Palmer, Pat Misch. Hey, Eric Surkamp is up with the White Sox, you know. Except the answer was Alfredo Simon. The answer was Alfredo Simon. That was the guy they'll really regret. He's apparently the size of Charles Barkley, and he throws a heavy, mid-90s sinker.

The Giants got him for Ricky Ledee, then let him walk two seasons later. At least Ledee worked out.

You don't want to read about how fantastic Matt Cain was on Saturday night, and I don't want to write it. He was good, so good, the pitcher we remember, the one who makes us hope for good things, even when the good things don't come.

More importantly, though, don't forget about Pablo Sandoval's at-bat against Chapman in the ninth. I want to make out with it.. 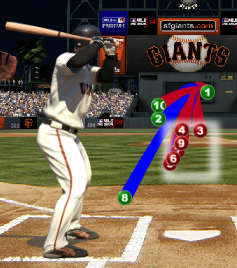 Not a single chase at a pitch out of the strike zone. NOT ONE. He saw seven pitches over 100 mph in the at-bat. He worked out a walk.

If either Hector Sanchez or Arias could have hit a chopper off the plate, Sandoval would have been the hero.