In the Giants' clubhouse, there is a man named Skip. Now, Skip is an earnest, eager man. And he has one job. He's supposed to deliver advance scouting reports from the front office to the players and coaching staff.

Skip: Here you go, Buster! The scouting report on the guy starting tonight. Guess he's just up from Double-A.

Buster Posey: Aw, come on, Skip. You know I don't have time for that stuff. House Hunters International is on.

Month after month, year after year, Skip tried his best.

Skip: Here you go, Hunter! The scouting report on the guy starting tonight. Guess he's just up from Triple-A!

Except this was Skip's one job. His purpose in life was to get these players to read a lousy scouting report, and they wouldn't. Skip grew bitter. He started doctoring the reports.

It will be weeks, months before they figure out Skip's revenge.

Skip: Jesse Hahn? The "SD" on his cap blinks before he throws a breaking ball, just like the ruby on Great Tiger. You'll know it when it happens.

Skip is just as unhappy as the rest of us tonight. He doesn't know if this revenge truly satisfies him, or if it's pure nihilism. The important thing is that the Giants can't beat the Padres, who are awful.

We were talking about dingers, like, two weeks ago. Where are ... what in the ...

This will go on throughout the years. When Mac Williamson is hitting 40 homers a year, when Joe Panik is hitting .370, when Gary Brown has a .420 OBP with 80 stolen bases, you'll still complain when they can't score over a two- or three-game stretch. "This team stinks! How dare they!" This is because you are a Giants fan and you are spoiled.

One of the mantras that sounded cute and smart when the Giants were winning 17 out of every 18 games was that if you really believed the Giants were this good -- 105-win good -- you had to believe that Tim Hudson was the best pitcher in baseball. It was supposed to be a reality check, a way to remember that regression is hiding in the bushes and making inappropriate grunts.

Here you go, then. His sinkers can get leak over the plate. His grounders can find holes. He can induce all of the double plays, yet still give up a half-dozen runs. He's not a wizard. Are you happy? The regression came. He's just a good pitcher, no more and no less. Are you happy?

No, I'm not happy. I want to go back in time, back to three weeks ago, and lie to that stupid person back there. "Yes, Tim Hudson is this good. Trust me, I'm from the future! Yes, the Giants are going to win the division by 39 games. It will be glorious." I want to lie and get Past Me believing again. Here are the options:

Where's the only lose/lose up there? The only one I chose, dammit. I tempered the enthusiasm of the good times, so I wouldn't feel so awful in the bad times, except the bad times still feel lousy.

WHAT HAVE I DONE? Come back, gentle youth ...

Maybe his salutes really fire people up. I thought they were mostly ornamental.

This is a good, bad, and ugly time to point out that Tuco always, always, always reminded me of Andres Torres, and I never put it together until tonight. 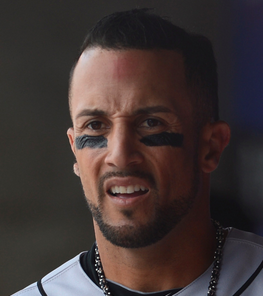 When the first pictures leaked of the protective caps for pitchers, I made jokes. In retrospect, that was stupid. It's a petty, animal reaction to value how you look over safety, and I should have been cognizant of that when I saw the hats for the first time.

Alex Torres, you have my respect for wearing the ridiculous hat because you want to live a longer life and do what you love while living it. In time, the hat will become less ridiculous, and so will the reactions. We will get used to this, and Torres will always be one of my favorite non-Giants because of his willingness to be the first pitcher to look silly in the name of safety.