If you saw two guys named Hambone and Flippy, which one would you think liked link dumps most? I'd say Flippy, wouldn't you? You'd be wrong though. It's Hambone.

Yesterday was Hensley Meulens's birthday, but the Giants did not hit a lot of balls really well and score a lot of runs and make him look good. Okay, Giants. We get it. You don't think birthdays are that special. Still, there was no need to be so mean about it.

Frank McCourt on his time with the Dodgers: "We created value there . . . "
Frank McCourt recently bought a stake in another sports franchise, one just as prestigious as the Dodgers. But all the hardcore Global Champions Tour fans might be worried that McCourt won't be what you would call a "guy who spends money on the team he bought instead of using it as an ATM," so yesterday he tried to reassure them. I don't see the problem. I thought his tenure as Dodgers owner was great. If I had my way, he'd own them forever.

Rule 7.13: Protecting Catchers, Hurting The Game
Fangraphs takes a look at some of the negative aspects of the new rule protecting catchers. Mostly the issues are that the rule is unclear and that it seems to be enforced differently by different umpires. But come on, guys! Human element! I'm not sure how that argument applies here, but I'm also not sure how it applies to other calls umpires get wrong, so I'm sticking with it. Who even needs to be correct? #TeamEntropy 4eva!

2014 Giants Playoff Bound?
A compilation of some of the biggest moments from the Giants' season so far, many of which are dingers. Remember when this team hit lots and lots of dingers? Man, that was fun. But the most important thing about this video is that the title asks if the Giants are playoff bound, which is obviously a jinx and therefore if the Giants don't make the playoffs it's the fault of the guy who uploaded the video and not the team. Pressure's off, players! That must be a relief.

Giants record by number of Brandons starting
Since 2013, the Giants have employed multiple Brandons. Yet this is the first study that I've seen correlating wins and number of Brandons who start. If those numbers are a little dry for you, here they are in graph form: 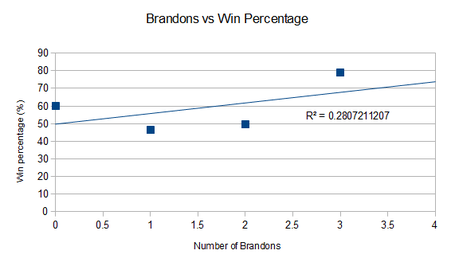 If you look at the right-hand side of the graph, you can see that if the Giants were to start a fourth Brandon, their odds of winning would increase past 70%. Brandon Scientists will be studying this data for years.

A Browser Extension That Makes Video Game News Much Funnier
This. This is news.