The weekend, it turns out, was a good weekend.

Maybe. Hopefully. All we know is that for the first time since June 7th/8th, the Giants have won consecutive games. That was also the first time they won a series. When you put it like that, it certainly had been a while. Or, to use arbitrary endpoints, here's what the season looked like in two different stretches before this series:

The Mets came and got Mets all over everything and the penicillin didn't work as fast as it should have, dang it. Stupid Mets.

There was mirth about the win on Saturday night. You were mirthful. I was mirthful. Much mirth. But it all would have vaporized with a loss in Sunday's rubber match. Another game, another loss. Another series, another series loss. It's hard to point to an isolated game as proof of anything, especially when it's surrounded by horrible events.

Winning a series, though? On the road? Even if it's against a last-place team, I'll accept that as a sign that things aren't weird anymore, and the Giants can resume the rest of the season. They have been appropriately chastened by the baseball gods. They were sorry. They were sorry about all those two-out hits, they were greedy. They'll allocate them more realistically in the future.

(They are not sorry.)

The individual story of the game was obviously Madison Bumgarner, who was a slutter death machine, breaking hearts and spirits with pitches that couldn't be hit. Decide to swing early, and it's a slutter on the hands that melts cuticles. Decide to swing late, and it's by you. Decide not to swing, and it crosses the plate. It's like the hitters are playing a game of rock/paper/scissors, and after the count of three, Bumgarner yells "BOILING ACID" like a nine-year-old and wins every time.

There was almost a piece of acceptable poetry running throughout the game, as the only hit through eight innings came on a 60-foot dribbler from Cody Ross. It would have been the lamest monkey-paw trick ever.

Satan: Sure, you can have Cody Ross, heh heh. And, yes, he might win you a *championship*, heh heh. But one day, when you're least expecting it, Ross will RUIN A NO-HITTER FOR ONE OF YOUR PITCHERS WITH AN INFIELD HIT SEVERAL SEASONS LATER.

Satan: No, I was supposed to ask for your soul.

Satan: I do this every time.

Instead, there was another infield hit off Bumgarner, so the Ross doink wasn't an issue. But that's the final line for Madison Bumgarner: 8+ innings, two hits, one walk (to Paul Goldschmidt, which is always understandable). Extending losing streaks from good -- or even mediocre -- teams are always frustrating because of what's missing. The two-out hits are missing. The dingers are missing. The errors from the other team are missing. Everything you expected in the past and can expect in the future are missing. And the games where your team's starter completely and utterly dominates the other lineup are missing.

Here was your team's starter completely and utterly dominating the other lineup. It had been missing. It am found.

Brandon Crawford's slow, steady development as a hitter has been one of the most satisfying things about being a Giants fan over the past three years. In Sunday's game, he faced Joe Thatcher, the Señor Spielbergo to Javier Lopez's authentic model, and drove a ball into the Crawford gap. This came a couple innings after his seventh triple of the year. I spent a while searching through Giants historical stats for something exciting about seven triples, but it looks like both Fred Lewis and Eugenio Velez had seven triples in 2008.

But Crawford's on pace for 14. When have on-pace stats steered us wrong, other than always? So I'm choosing to believe Crawford's keeping this up, and he'll be one of the triple-happiest players since Willie Mays. Before Mays, there were a dozen or so players who tripled at will because they played in an era when the baseball was a dodecahedron made from horse hooves, and 80 percent of the opposing players had dropsy. Since then, there was Mays, Bobby Thomson, and Angel Pagan. Crawford has a chance to get on that list.

He has a case of the dropsies now, but he'll stop that. Please stop that, Brandon Crawford.

If you're a fan of past articles like, "Kevin Frandsen is probably a right-handed Chase Utley", or "6 ways how the Giants can win Dallimore games than we expected," you'll love this next bit. Check it out.

Two games! One of which was just an at-bat! Blasphemy!

Hear me out, though. All that's at stake is my reputation, which is crap anyway.

When Mueller came up, he wasn't a prospect. He never cracked the Giants' top-10 lists for Baseball America. He couldn't run well. He could field a little bit, but he wasn't a plus fielder. He had doubles power, if you squinted, but he would never hit for actual power. The only thing he had going for him was bat control. His BB/K ratios were even more ridiculous than Panik's, but he was also older for his respective leagues.

Look, that's not the point. The point is that I've been on the Panik bandwagon for three years, and I'm not stopping now. He's Bill Mueller, except he's going to play second. And if he gets the single that wins the game that gives the Cubs a chance to win the World Series, after six solid years with the Giants, I'll be okay with that.

When searching for a picture of Mueller in a Dodgers uniform, I inadvertently found a picture of him pooping out a batting helmet. 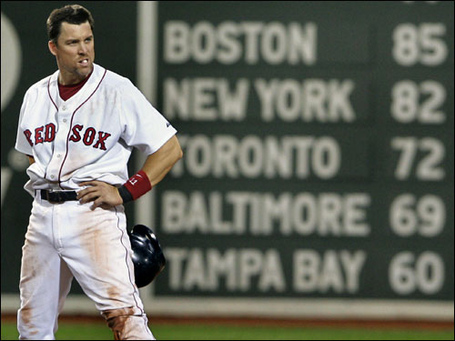 He really was the best. Panik's probably like that, except he doesn't switch-hit and he's going to play in the middle of the infield.