I, for one, will continue to blog about the Fresno Giants after relegation.

The last week of the San Francisco Giants, as described by the top of the fifth inning in Friday's game:

Batter #1 - Gregor Blanco (walk)
The Giants came up down by one, and Josh Collmenter walked the leadoff hitter. This is because he was bad at pitching tonight. He doesn't have great (or good) stuff, so he relies on bow-and-arrow control, which he did not have. His mechanics were off, at least in this at-bat to Blanco, and he walked him on four pitches. He threw four cutters that ranged from 84 to 86 mph.

Over the last week, the Giants have allowed ... 493 leadoff walks. And of those ... 494 have scored. Leadoff walks should score. It's part of baseball's aesthetic design.

The Giants were sure in a great spot.

Batter #2 - Hunter Pence (fly ball)
Pence got ahead in the count, 3-0. He took a strike, then had a mean hack at a fastball down the middle of the plate, fouling it back. In the final pitch of the at-bat, Pence hit a baseball 400 feet for an out. If the roof were open, perhaps it leaves the ballpark.

This isn't to suggest that Pence should have had a homer, or that the Giants were somehow robbed. None of this is about that. It's just about the millimeters. The Giants were getting the millimeters early in the season, the perfect square-up of bat-on-ball. Right now, nothing is working

Batter #3 - Buster Posey (walk)
Bases for nothing and your rallies for free. None of the pitches were especially close, and Collmenter was creeping up on 100 pitches, and he had thrown 11 balls and three strikes in the inning, with just one out.

Batter #4 - Pablo Sandoval (strikeout)
Sandoval never swung and missed in the at-bat. He took a first-pitch strike -- probably because of the wacky control problems Collmenter was having -- and fouled two pitches off before getting called out on an Eric Gregg strike: 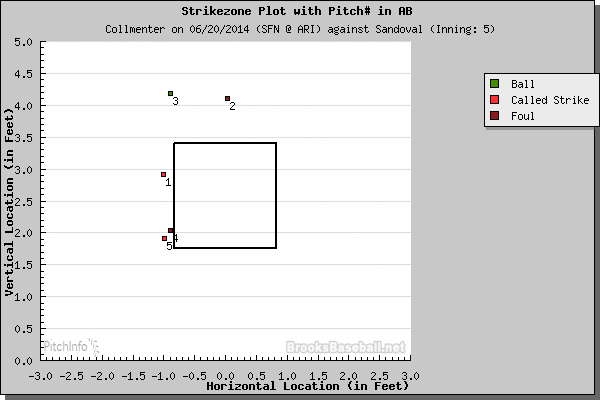 Again, that's from the catcher's perspective, and the numbers by the dots correspond to the pitch in the at-bat. It was a strike that Collmenter hopes to get every time he pitches. It was also a strike that Sandoval has taken, what, once in his career with two strikes? That's the kind of pitch Daric Barton or F.P. Santangelo takes, hoping for a walk. Sandoval took it because he didn't think he could do anything with it, which is very, very un-Sandoval.

Also, it was not a strike. Whatever. Calls like that happen. Two outs.

Batter #5 - Michael Morse (fly ball)
It's hard to explain just how terrible Collmenter was in this at-bat. He didn't throw a first-pitch strike. He missed badly with the second pitch. Then ... 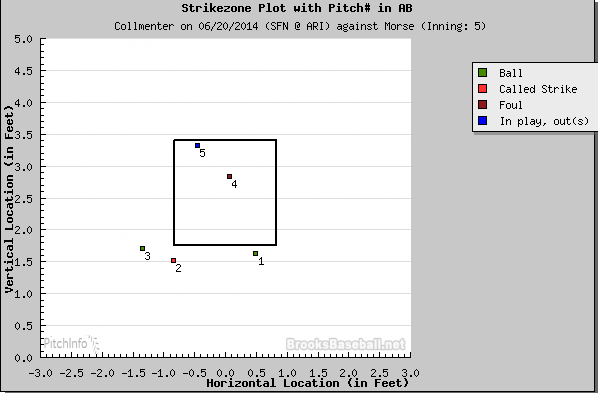 Huh. They called that second pitch a strike. That was generous. From 2-0 leverage to 1-1 in the blink of a deft Miguel Montero frame-job. Whatever. Calls like that happen ... in back-to-back plate appearances ... in the middle of a decrepit losing streak.

The important thing is that Collmenter threw the worst possible pitch he could throw immediately after the gift call: a mediumball right down the middle of the plate. Morse just, just, just missed it. He was waiting for the pitch and probably waiting for the location. Just fouled it back.

The next pitch wasn't much better. Another mediumball, but this time at the top of the zone. Morse hit it 400 feet for an out. If the roof were open, perhaps it leaves the ballpark. Instead, three outs.

If you're keeping score, that's two four-pitch walks, a bogus strikeout, and two long, long fly balls in a park that usually punishes long, long fly balls. Then Collmenter didn't return to the game because he was awful at his job. The Giants scored one run.

Again, this isn't to suggest the Giants were this close to winning, so let's all feel sorry for them/ourselves. Tim Lincecum still doesn't know where the ball is going, which led to things like 0-2 curveballs hanging in the middle of the strike zone with two outs and a runner in scoring position, so it's not like the Giants were without fault. They were with fault. And how.

But look at this crap. This is how a team loses six straight. This is how a team goes a week playing and losing one-run games. They're building the IKEA cabinet, but they're forever missing one dowel. It's jarring because we're not used to this. We were spoiled.

Later in the game, Lincecum didn't get a third-strike call on an obvious swing.

When this isn't a strike, you know it's not your night. #SFGiants pic.twitter.com/0CZ7XbyDTl

The batter advanced the runner with a productive out instead. The next batter drove him home with a sac fly. The sequence wasn't the difference in the game. It was just the glitch in the matrix pulling down its pants and waggling at us.

You think I'm kidding about this spreadsheet ... 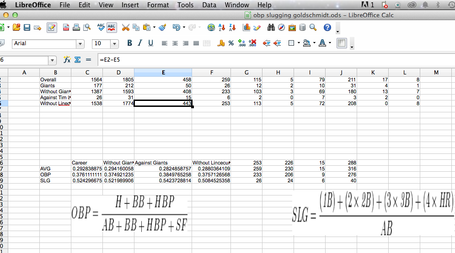 Recap might be delayed a bit tomorrow, as I'll be DVRing it late. Strangely, you do not care.