Sure, I just heard of him and don't know if he's any good, but when has that sort of thing stopped us before?

This is an article you've read before. There is an exciting international player on the market. He will be expensive. I have no idea if he's good, but I want the Giants to sign him anyway. Welcome, rumors about Yasmani Tomas and the Giants, even if they're more unrealistic wishes than rumors.

Who is Yasmani Tomas? He's a Cuban outfielder who just defected, and he was described well in this sentence from Baseball America:

A righthanded-hitting corner outfielder, Tomas can hit towering home runs thanks to the strength from his thickly-built 6-foot-1, 230-pound frame. Tomas has 70 raw power on the 20-80 scale, and with Jose Abreu already gone, the only player still in Cuba with more raw power than him was Alfredo Despaigne. He has some experience in center field and is a decent runner for his size, but his speed is still below-average and he’s going to be a corner outfielder in pro ball.

Tomas might have a chance to go straight into a major league lineup, but a more likely scenario would have him starting in the upper minors, with Triple-A seeming like a good fit. 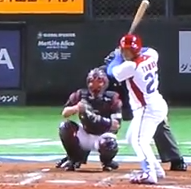 This kind of a perfect storm. The Giants don't have a lot of hitting prospects in the upper minors. Here's a hitting prospect who should start in the upper minors. The Giants' best outfield prospect is out for the year after Tommy John surgery, and he wasn't especially close to the majors, anyway. Here's an outfield prospect. The Giants should probably have a backup plan in place so they don't have to pay silly money to Michael Morse. Here's a backup plan. It's perfect.

That's up for debate. At least, just how good he is and how good he can be. The Giants, after doing their due diligence and kicking some tires, might really, really want Tomas. They might think he's a player worth $50 million, and they're willing to pay it. Except the Rangers might think he's worth $60 million, and they'll pay it. The Dodgers might pay him $100 million because they don't have enough outfielders in the system. I'm sure the Giants would take Tomas for the price of a first-round pick. I'm also sure he's going to get much, much more than that.

Now, the Giants just signed a Cuban emigre, so this is getting greedy. But Daniel Carbonell is supposed to be more of a speedy center fielder. Tomas is more of a dinger-monster. Why keep Darryl Hamilton instead of Ellis Burks when you can have both? Or something. Greed is good.

In the grand tradition of the Internet, I do not know who this expensive baseball player is, but I want him on my team. Hopefully he's crazy like Yasiel Puig, and the two of them can fight for the next 10 years like some sort of baseball version of Pacific Rim. I would really enjoy that.