Giants favorites to win National League pennant, according to oddsmakers

Well, now that gamblers have jinxed the Giants, let's talk about movies that come out in October. I think Birdman looks interesting.

Share All sharing options for: Giants favorites to win National League pennant, according to oddsmakers

Before we go on, let's talk about the the sensationalistic headline. It's true that the Giants currently have the best odds to win the National League pennant, and the second-best odds to win the World Series, according to Bovada. But that doesn't mean that Bovada's supercomputers are running BillJames.exe and divining the future. No, it just means that lots of folks are betting on those wacky Giants.

Still, I've been getting these odds since the last out of the 2013 World Series, and the stupid Dodgers have always been at the top. It's just nice to see the Giants up there.

The Giants are also 3-to-1 favorites for the NL pennant, and they get overwhelming 1/2 odds to win the NL West. Madison Bumgarner gets 10-to-1 odds to win the Cy Young, and Tim Hudson gets 12-to-1 odds. I put lots of money on both, just to be safe.

The first thing you need to remember is that you can make just a ton of money, here. Pick the right team out of those 30, and, really, you can retire before 2015. This is probably the best opportunity to be rich, considering these casinos and sportsbooks are just begging for you to take their money. The second thing you need to remember is that I once got an email from Bovada with this subject line: 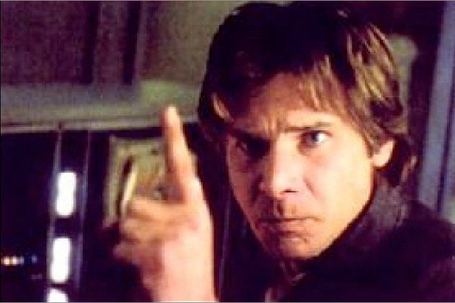 Pretty much. He's like a reverse Wolf from yesterday. But I got an email with World Series odds and thought, heck, this is some fun offday stuff. Now that the inveterate gamblers have jinxed the Giants, we won't have to spend so much money on championship paraphernalia. Which will free up some money for gambling, and ...

Eh, beats being the Diamondbacks.