Hunter Pence gets the bobblehead he deserves

Hunter Pence gets the bobblehead *we* deserve.

Share All sharing options for: Hunter Pence gets the bobblehead he deserves

The year was 2013, and the Giants announced a Hunter Pence bobblehead for the upcoming season. You were excited. I was excited. This was going to be the best bobblehead ever.

Then the pictures came out and ... it was ordinary. We were expecting this: 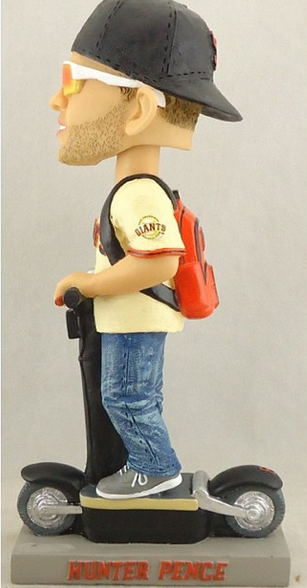 Pleasant was the word I used back then. I think I was being polite. It was the dullest Hunter Pence bobblehead possible. Alas, we cried. Alas.

However, the good people at the Giants Community Fund have commissioned a Hunter Pence bobblehead for the Junior Giants Stretch Drive next Thursday, June 26, and it is glorious.

Our 2014 Jr Giants #StretchDrive Bobblehead has arrived & it's @hunterpence - Anyone remember this 2013 catch in SD? pic.twitter.com/qhPfau6rjH

YES. Now that's a bobblehead that might wake up and kill you. That was all I wanted, to have a sense of doubt when I brought the bobblehead home and placed it within 20 feet of where I sleep. It is absolutely glorious. It's flattering and not that strange, but it's just strange enough. Perfect.

#ScavengerHunter is so close to the bay, he can taste the saltwater on his tongue #SFGiants pic.twitter.com/cSLXiLkTyA

Just perfect. I mean, I have suggestions on how to improve it ... 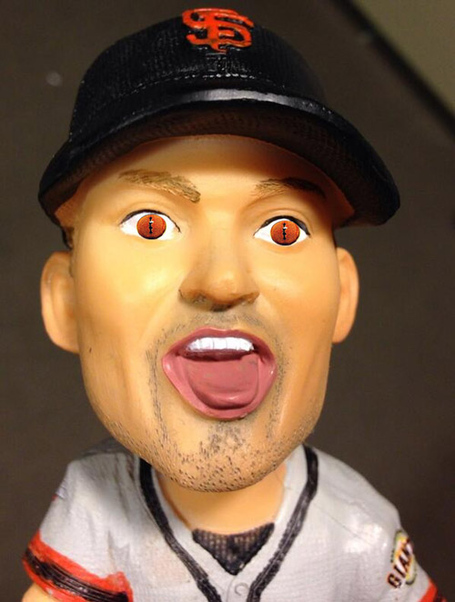 This is for the Junior Giants Stretch Drive starting next Thursday, and they will sell these bobbleheads to help a great cause. They can have, lemme check, all of my money. Last year's Matt Cain in a perfect game pose sold out by the third day. I'm a bobblehead nerd who longed for a proper Hunter Pence bobblehead. I will not wait until the third day.

Now that this item has been checked off my please-make list, I have other ideas. Like a Hunter Pence head. Not a bobblehead, but just a head. It would be the same size as the head on a bobblehead, except it wouldn't have the body. Just a head. You could keep it on your desk, rolling around in your glove compartment, in your medicine cabinet, in your pocket ... just a head.

I don't sell these ideas. They're yours to make, people. For now, though, let's just appreciate the Hunter Pence bobblehead we've always wanted.